Have you ever heard of the 70-year cycle in history? Here's an excerpt from an essay by Eric A. that introduces the concept:

Many of you may be familiar with the Foundation series by Issac Asimov. In it, mathematician "Hari Seldon spent his life developing a branch of mathematics known as psychohistory. Using the laws of mass action, it can predict the future, but only on a large scale; it is error-prone on a small scale."

In practice, we can see that this would be theoretically correct: we study history precisely because human nature is relatively the same and the same events recur with the same predictable responses. If history really were chaos--a muddle of events appearing randomly and being resolved in unpredictable ways--there would be no point in studying it.

So what of 70 years? It seems that American politics goes through a roughly 70 year long cycles where it swings from one side of the political pendulum to the other. For example, if we start in 1789, which marks the real beginning of the United States as a single nation with the inauguration of George Washington as the nation's first president under the Constitution, the passage of 70 years suddenly puts us on the cusp of the U.S. Civil War in 1859 as the nation was getting set to try to tear itself apart.


The theory says that America became a Republican country starting about the year 2000. (From 1860 Republicans were dominant, and then the Dems starting about 1930.) Each cycle is about two political generations. The 70 years before 1860 don't have today's parties, but they fit otherwise, with the Revolutionary generation and then a follow-on generation stuck in old habits of thought. And then a problem that needed a new political alignment to solve. 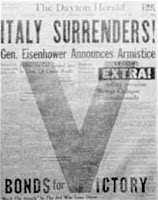 But what if it's not just American politics? What if it's really a cycle that's driven by opposing ideologies in conflict?

For example, in 1896, the U.S. Supreme Court made it legal to institutionalize racial segregation in the United States. Almost 70 years later, the U.S. Congress was undoing the damage in the landmark Civil Rights Act of 1964.

Well, that would put us in 1943. And in 1943, the United States fought and succeeded in forcing fascist Italy to surrender and switch sides in World War 2.

The Concise Encyclopedia of Economics explains what fascism in Italy was all about, emphasis ours:

As an economic system, fascism is socialism with a capitalist veneer. The word derives from fasces, the Roman symbol of collectivism and power: a tied bundle of rods with a protruding ax. In its day (the 1920s and 1930s), fascism was seen as the happy medium between boom-and-bust-prone liberal capitalism, with its alleged class conflict, wasteful competition, and profit-oriented egoism, and revolutionary Marxism, with its violent and socially divisive persecution of the bourgeoisie. Fascism substituted the particularity of nationalism and racialism—“blood and soil”—for the internationalism of both classical liberalism and Marxism.

Where socialism sought totalitarian control of a society’s economic processes through direct state operation of the means of production, fascism sought that control indirectly, through domination of nominally private owners. Where socialism nationalized property explicitly, fascism did so implicitly, by requiring owners to use their property in the “national interest”—that is, as the autocratic authority conceived it. (Nevertheless, a few industries were operated by the state.) Where socialism abolished all market relations outright, fascism left the appearance of market relations while planning all economic activities. Where socialism abolished money and prices, fascism controlled the monetary system and set all prices and wages politically. In doing all this, fascism denatured the marketplace. Entrepreneurship was abolished. State ministries, rather than consumers, determined what was produced and under what conditions.

Now that you've read what fascism entails, consider the following excerpt from an article yesterday at The Huffington Post, noting how nearly 40% of U.S. CEOs have come to have a very large portion of their income paid for by U.S. taxpayers:

WASHINGTON -- More than one-third of the nation's highest-paid CEOs from the past two decades led companies that were subsidized by American taxpayers, according to a report released Wednesday by the Institute for Policy Studies, a liberal think tank.

"Financial bailouts offer just one example of how a significant number of America's CEO pay leaders owe much of their good fortune to America's taxpayers," reads the report. "Government contracts offer another."

IPS has been publishing annual reports on executive compensation since 1993, tracking the 25 highest-paid CEOs each year and analyzing trends in payouts. Of the 500 total company listings, 103 were banks that received government bailouts under the Troubled Asset Relief Program, while another 62 were among the nation's most prolific government contractors.

Meanwhile, that all would be occurring as American entrepreneurs would appear to be harder and harder to find:

The US entrepreneurial spirit may be faltering. Check out these data points from The Wall Street Journal: a) In 1982, new companies made up roughly half of all US businesses, according to census data. By 2011, they accounted for just over a third; b) from 1982 through 2011, the share of the labor force working at new companies fell to 11% from more than 20%; c) Total venture capital invested in the US fell nearly 10% last year and is still below its prerecession peak, according to PricewaterhouseCoopers.

The United States would appear to be well on its way to adopting fascist Italy's political-economic system, favoring the politically-connected while starving entrepreneurs out of the economy. Although today in America, we call it "crony capitalism". And the people who practice it "progressives".

Do you think we should start calling it what it really is?