In June 2013, the year-over-year growth rate of the value of trade between China and the United States was such that both nations' economies could be considered to be in recession.

That's the conclusion we reach in observing that the value of the growth rate of China's exports to the U.S. drop just below the zero line, while the value of the growth rate of the U.S.' exports to China rose just above it. And unlike the February-March 2013 time frame, where the year-over-year data was greatly affected by the relative timing of the week-long, Chinese New Year/Spring Festival holiday, there isn't an alternative explanation that accounts for the very slow or negative growth in the value of trade between the two nations.

And that means that very weak economic growth in both nations is responsible for the slowdown we observe in the growth of trade between the U.S. and China, which is presented in the following chart in terms of the receiving nations' own currency. 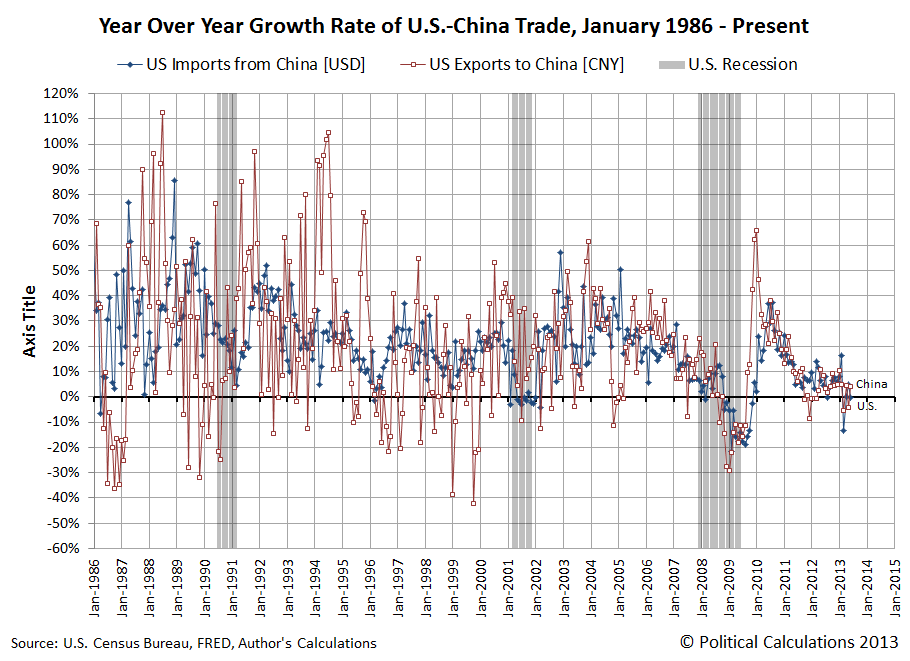 The important thing to take away from this analysis is that the data for international trade tends to lag the economy.

The reason why is very straightforward. The decisions to produce goods that will be exported to markets in other countries are made many months in advance of their arrival in the ports of those other nations. And that is time on top of the weeks that it takes for cargo to reach either nation after it has been loaded onto the ships that deliver it.

Consequently, the goods that ship out in international trade will do so in accordance with the economic conditions that prevailed in the nation to which the goods will be delivered many weeks, if not months, earlier than the dates that they arrive in the destination nation's ports.

Here, that matters because the U.S. has been skirting the edge of a recession since July 2012 and seems only just now to be starting to come out of it. Given that the year-over-year growth rate in international trade is a lagging indicator of the relative economic health of nations, that means we may continue to see more lackluster months of trade growth before we'll see an increase in the value of goods being exported to the U.S. from China as its economy recovers.