Political Calculations
Unexpectedly Intriguing!
September 19, 2013
The Fed's Surprising Decision and Its Next Decisions

Yesterday's announcement by the Federal Reserve that it will not begin reducing its purchases of U.S. Treasuries and mortgage-backed securities with newly created money (a.k.a. "Quantitative Easing" or simply, QE) was a surprise.

Or was it really?

You would have to count us among those who were surprised that the Fed decided to hold off on trimming its $85 billion per month on average security-buying spree. We fully expected that the Fed was going to announce that it would reduce its pace of acquisitions by somewhere between $10 and $20 billion per month, which we base on our assessment that the U.S. economy has finally begun to recover from a year-long microrecession.

But was it really a surprise to all investors across the board?

The reason we ask that question is because the unique measure of probability that we developed specifically to determine how likely that investors collectively believe that the Fed might announce that it would reduce its QE purchases this month, rather than in 2014, has been sending a very different signal for weeks: 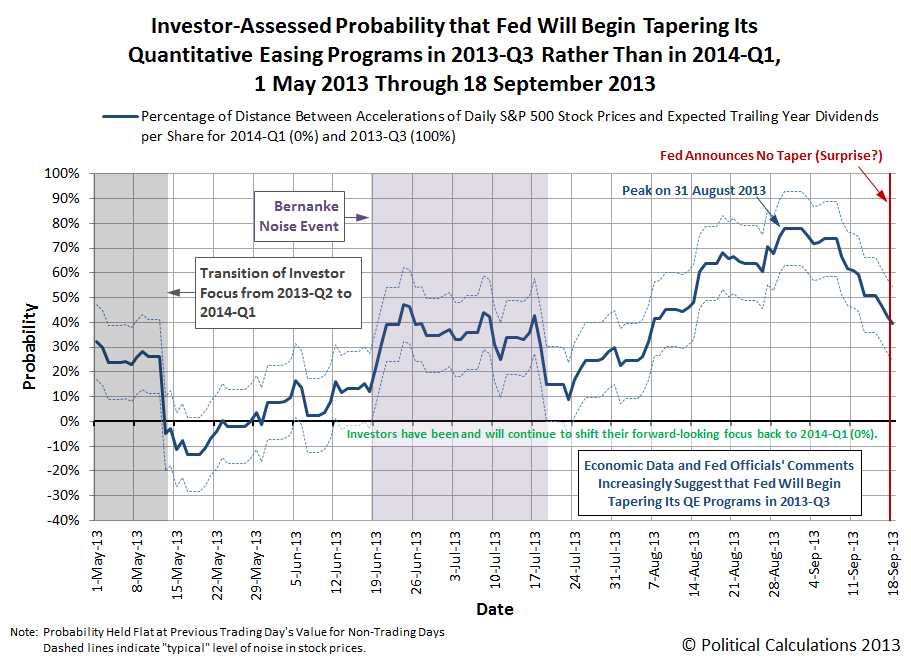 As we can see in the chart, our estimated probability that the Fed would taper sooner peaked at 78% (with a typical margin of error of +/- 15%) on 31 August 2013. Since then however, that probability has itself tapered off, and going into 18 September 2013, the day of the Fed's announcement, it had been cut nearly in half to 42%.

We had interpreted that decrease as being consistent with investors shifting their forward-looking focus for setting their expectations for stock prices to the more distant future. We reasoned that since there was so little time left in 2013-Q3, there was little point for investors to continue speculating on the future of the Fed's QE program, since the clock was ticking down on both when the Fed would make its announcement and the effective end of the quarter (the dividend futures contracts for 2013-Q3 expire this upcoming Friday, 20 September 2013). We reckoned that investors were shifting their attention to the first quarter of 2014 in setting their expectations for making their investment decisions. And paradoxically, that's exactly the same outcome we would expect for a future where the Fed would choose to delay trimming back on its QE program.

So what if a number of influential investors had instead come to the conclusion that the Fed would sustain its current pace of security acquisitions for its QE program? Anticipating the upward market move that would accompany such a policy adjustment, could they have been buying up stocks at comparatively low prices in advance of the announcement, driving up stock prices in such a way that they were really communicating that the Fed would keep the status quo with its QE program?

We don't know if we'll ever find out the answer to that one, except perhaps by how much profit-taking now takes place over the next few weeks now that the Fed's announcement is behind us. It's just a good thing that one way or another, the market was shifting to focus on the future as defined by 2014-Q1, which has meant, and will continue to mean, generally rising stock prices in the absence of a significant level of new noise in the market.

Speaking of which, the leading contender for a new negative noise event at this time would be a partial federal government shutdown sometime in October 2013. That potential perhaps explains why the Fed opted to continue its program, since it has already proven itself to be capable of offsetting bad and ineffective fiscal policies emanating from Washington D.C.

And if the Fed really wanted to send a message to the people in Washington D.C. who really need to receive it, it would act to boost its QE efforts by 60% of the amount that federal government spending would be reduced in the event of such a partial government shutdown, since this additional amount of QE would be sufficient to completely offset the negative fiscal drag on the nation's GDP that would result from such a partial shutdown.

After all, there's really no good reason to put the rest of the American people through any more economic hardship because of poor fiscal policies emanating from Washington D.C. At long last, perhaps its time for the politicians and bureaucrats to pay the price for their bad behavior, and the best way to target them is to let them go through the kabuki theater of a government shutdown, but to offset it with enough QE so that regular Americans would be hardly affected by their actions.

Is there anything worse for a politician or a bureaucrat than finding out that they don't have the power they think they do? In this case, would there be any better public service that the Fed could perform for the American people?