Now that Eugene Fama, Lars Peter Hansen and Robert Shiller have collectively been awarded the Economics Nobel prize for their insights into how asset prices work, insights that we both routinely apply and have extended in our own work, we'll take this opportunity to open up a new window for how all that applies to the S&P 500.

We'll do that by remaking our favorite chart - the one that shows how changes in the year-over-year growth rate of today's stock prices keep pace with changes in the year-over-year growth rates of the dividends per share that are expected at specific points of time in the future - replacing the dividend futures data we obtain from IndexArb with dividend futures data from the Chicago Board of Exchange, which are really different from one another. The chart below shows all that data for each future quarter's dividends going all the way from 3 January 2013 through 10 October 2013: 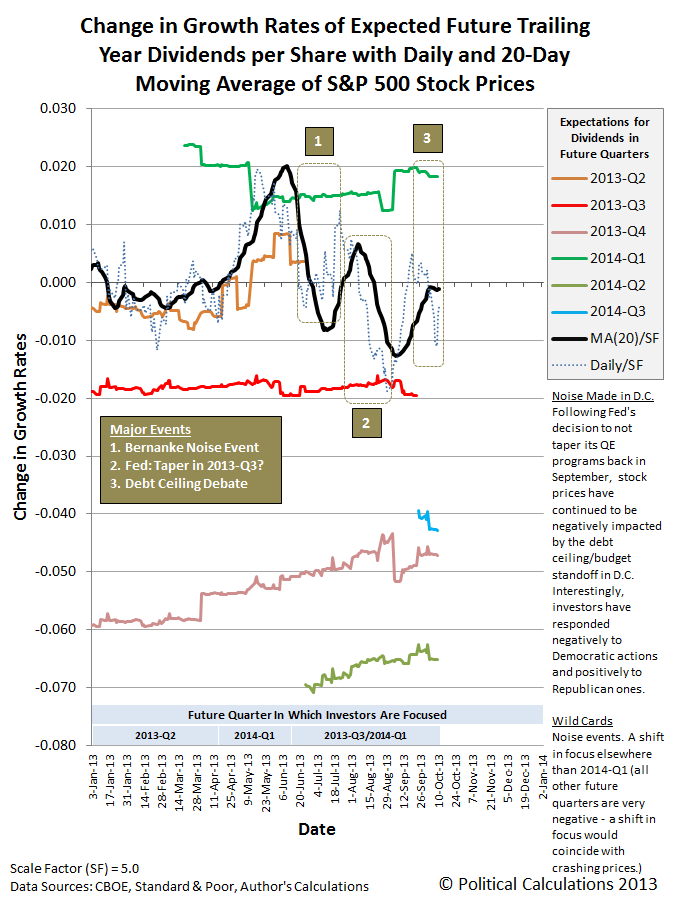 Each of the data series that apply for a future quarter's dividends per share represent the expectations that investors have for the amount of dividends they will earn in that quarter. In the absence of large sources of noise, or variance, changes in the growth rate of stock prices will closely track with the trajectories associated with a specific future quarter where investors collectively focus their forward-looking attention.

In the chart above, we see that's the case at the very beginning of 2013, where investors focused their attention on the expected future defined by the second quarter of 2013 in setting stock prices. The focus of investors remained on that quarter, which ended in June 2013, well into April 2013.

At that point, investors began shifting their forward-looking attention to the more distant future defined by the expectations for dividends associated with the first quarter of 2014. We observe this shift in focus in the transition of daily stock prices (the dotted blue line) from the data series for 2013-Q2 to 2014-Q1.

That attention stayed there until 19 July 2013, when stock prices suddenly deviated from where investors were focused in response to what we've called the Bernanke Noise Event. Here, investors reacted to the new information that Fed Chairman Ben Bernanke communicated at a press conference that the Fed was seriously considering tapering off its purchases of government-issued securities once certain economic targets were hit by sending stock prices considerably lower than they would otherwise have been set if only the expectations of future dividends to be paid in 2014-Q1 were driving them.

That reaction was more than the Fed was ready to handle at that time. It took a month of effort, but the Federal Reserve finally succeeded in restoring the expectation that investors previously had that there would be no tapering of its QE programs until 2014, which we observe in stock prices resuming to closely track the expectations for 2014-Q1's dividends. But then, positive economic data combined with statements by lesser Fed officials led investors to believe that the Fed could begin tapering its QE program before the end of the third quarter of 2013.

That set off a larger negative reaction in stock prices. Only here, investors shifted their focus away from the more distant future quarter of 2014-Q1 in setting stock prices to instead fully focus on the critical quarter of 2013-Q3. We observe that shift taking place from the end of the Bernanke Noise Event through the end of August 2013, which marked the high point for the expectation of investors that the Fed would being tapering its QE programs in September 2013. 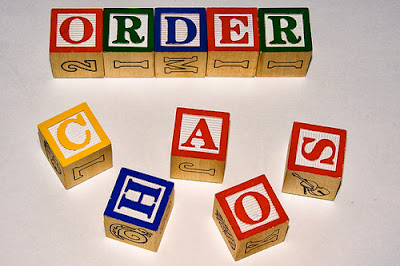 And then, the real-time economic outlook for the U.S. economy began to take a turn back to the worse, leading investors to increasingly bet that the Fed would not act to cut back its QE programs at the end of 2013-Q3, which led to rising stock prices as investors refocused their attention toward 2014-Q1. The Fed then surprised many, including us, that it would not act in 2013-Q3 to trim its QE bond-buying spree, but in retrospect, the evidence from stock prices and the expectations for future dividends supports that interpretation of events.

Unfortunately, before they could make it back to the level that would be fully consistent with the expectations associated with 2014-Q1, a new negative noise event centered around the potential for a government shut down and partial default on the nation's debt reared its ugly head, causing stock prices to once again deviate away from the level they would otherwise be. And that brings us nearly up to the present.

If all this makes the stock market sound like a chaotic place, that's because it frequently is - but that doesn't mean there isn't a predictable order underlying it all. That's what lies beyond the work of newly-minted Nobel-prize winning economists Fama, Larsen and Shiller, whose work has made what we do possible.

Speaking of which, if you want to find out more about our work, it all begins here. You only have to review several years of worth of what we've worked out live, in real time, without the benefit of any sort of safety net to catch up to us!...

Notes: we've modified the chart in this post from previous versions by eliminating an additional scale factor of 12 that we were applying to both the changes in the growth rates of dividends and the change in the growth rate of stock prices, which was an artifact our annualizing the monthly data we were using when we first discovered the relationship between the two. Since this additional scale factor is applied to both dividends and stock prices, it effectively cancels out of our math describing how changes in the growth rates between the two are related, so we're taking this opportunity to dispense with it altogether.

Beyond that, we've also changed our amplification scale factor, which is the scale factor that matters in our math. This change was driven by our change in data sources, where there can be considerable differences between the dividend futures data reported by IndexArb and that reported by the CBOE. Using IndexArb's data, we had settled on a typical amplification scale factor of 9.0, while the factor we're opting to use for the present with the CBOE's data is 5.0.