Political Calculations
Unexpectedly Intriguing!
October 7, 2013
Nice Market You Have There. Shame If Something Should Happen To It.

We're not going to update our favorite chart this week, as we're still busy modifying it to cover the activity we anticipate into 2014. So instead, we thought we'd analyze the biggest market action, or non-action as the case really was, from last week!

Our story all begins with President Obama's interview with CNBC at market close on Wednesday, 2 October 2013 (transcript available):


By the next morning, the market had reacted in such a way to the President's comments that CNBC was compelled to report how investors were interpreting them, which is reflected in our original headline for this post. CNBC's Finance Editor Jeff Cox writes in Wall Street wonders if Obama wants a selloff:

In an exclusive interview with CNBC, the president warned Wall Street that this shutdown could be different. Previous halts in nonessential government activities have caused little market reaction, with major averages actually rising most of the time in the month after the shutdowns are settled.

Obama's remarks indicated to some observers that he is trying to push investors out of the relative complacency they have shown so far. Futures were broadly lower Thursday, indicating markets may be taking heed.

"They feel that a severe market selloff would be helpful to break the logjam," said Greg Valliere, chief political strategist at Potomac Research Group in Washington. "It would be helpful in making the Republicans sue for peace. Obama and [Senate minority leader] Harry Reid believe that."

If President Obama was looking to trigger a selloff for Thursday, he succeeded. The chart below shows the trajectory of the S&P 500 from Monday, 30 September 2013 through Friday, 4 October 2013. Note the movement on Thursday, 3 October 2013: 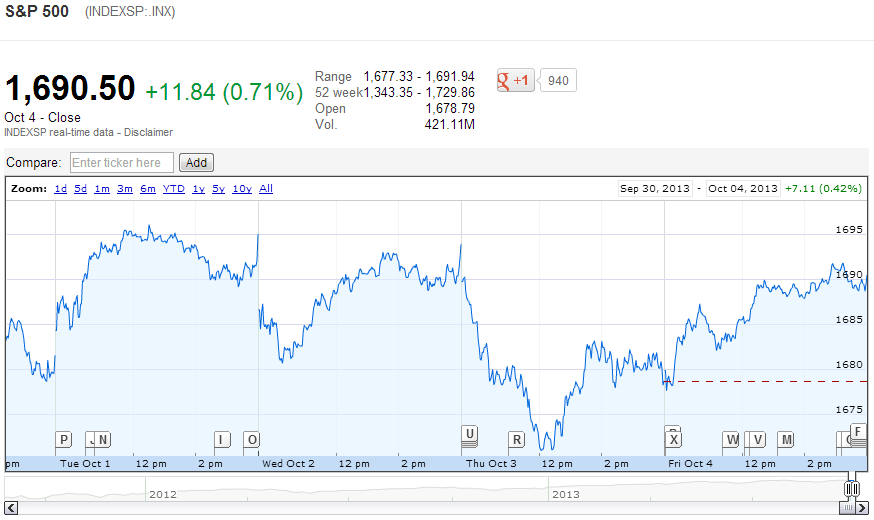 In the first hour after opening, the S&P 500 index fell 10 points in the first hour before stabilizing, holding at a level of about 1678 until 11:26 AM EDT. That was the point in time at which the news broke that Christine Lagarde, the head of the International Monetary Fund, who shares political connections with President Obama in Chicago, was warning of the potential impact that a debt default by the Obama administration would have on the world economy (the linked article was originally posted at 11:26 AM EDT).

That news was sufficient to take the S&P to its low of 1671 for the day, hitting bottom just after noon had keeping near that level until 12:26 PM EDT.

What happened next was perhaps the most remarkable event of the day. At 12:19 PM EDT, he New York Times reported that the Speaker of the U.S. House of Representatives, John Boehner, had told colleagues that he was "determined to avoid a federal default and is willing to pass a measure through a combination of Republican and Democratic votes", which investors apparently took several minutes to absorb before reacting.

Their reaction was sufficient to wipe out the effect of IMF head Christine Lagarde's comments, and the market bounced back up to the 1680 level before trading in a narrow range between 1678 and 1682 for the rest of the day, closing at the low end of that range. By the end of trading on Friday, 4 October 2013, the market had wiped out the negative impact of President Obama's threatened default altogether, as it recovered to its pre-Obama threatening warning level. 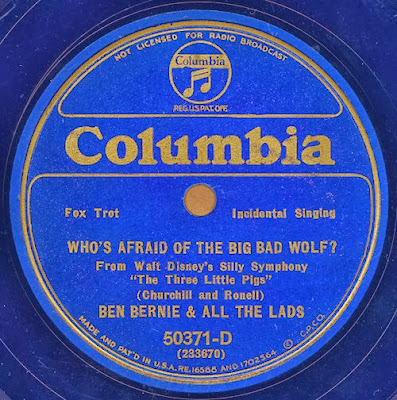 What we find interesting in all this is that there was so little effect on the market from the noise contributed by each of these political actors. The current President of the United States of America, Barack Obama, in seeking to create a market selloff to exploit for his own political advantage, couldn't huff and puff enough to make the S&P 500 blow down by much more than 10 points. Meanwhile, the comments of the head of he International Monetary Fund, Christine Lagarde, who owes her position to President Obama's patronage, only succeeded in pushing it down another seven points.

By contrast, the Speaker of the House of Representatives John Boehner's comments reassured the markets enough to recover by anywhere from 7 to 12 points. Put another way, his calming influence cancelled out the negative influence of head of the IMF and, for good portion of that Thursday afternoon, periodically exceeded the negative influence of the President in terms of total point movement.

Perhaps things will change and President Obama's negative influence will grow as we get closer to the President's planned default date. For now though, it's pretty plain that the market isn't reacting the way that President Obama wants, as the market's action on Thursday, 3 October 2013 indicates that it largely views him as a noisy irritant. That's not something that the President can long afford to continue if he wants avoid an early lame duck status, so we think it's likely that he'll instead increase his level of apparent irrationality in refusing to compromise on implementing his increasingly-troubled "affordable" health insurance initiative and his desire to sustain excessive levels of government spending.

Consequently, we expect the political noise affecting the markets to continue and grow louder. We're pretty sure that the markets would really rather get back to real business and not have to continue paying attention to irrational and ineffective executive leadership in Washington D.C. But then, that's the kind of leadership that emanates from the nation's capitol these days.