As the apparent conclusion of the debt ceiling debate in Washington D.C. on Thursday, 17 October 2013, the largest source of noise negatively affecting stock prices dissipated. Investors, who had been anticipating the conclusion of the noise event since Wednesday, 16 October 2013, rapidly bid up the value of the S&P 500 through the end of the week, reaching an all-time record high of 1744.50 on a gain of 46.44 points in just those three days.

In the absence of that noise, or any new negative noise events that may be brewing out there, we can expect the change in the growth rate of stock prices to once again move to keep pace with the change in the growth rate of dividends expected to be paid in 2014-Q1, which is where investors have largely been maintaining their forward-looking focus in setting their expectations outside of other noise events. The chart below shows where stock prices are and where they're going: 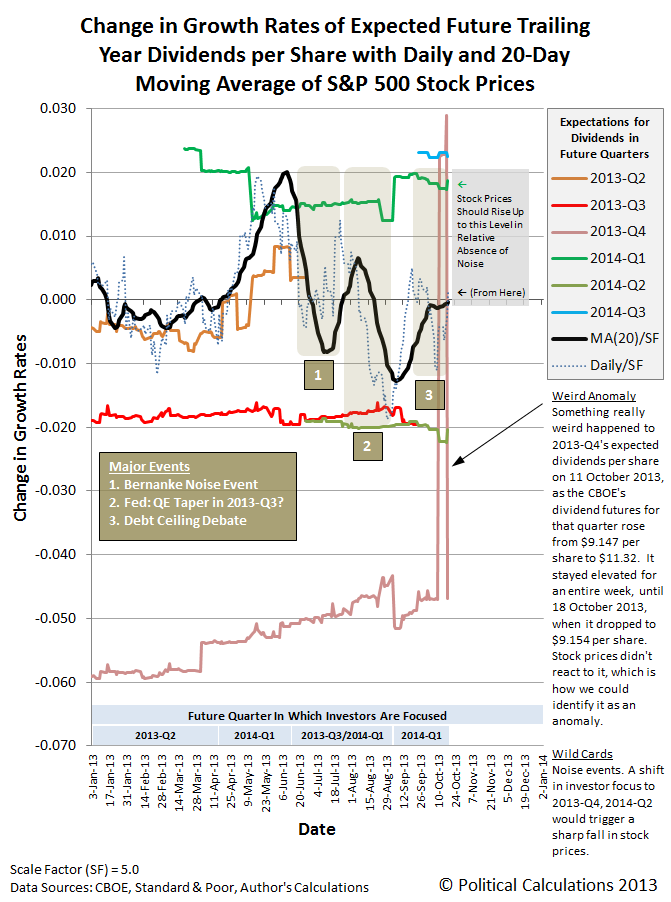 In terms of what that means for stock prices, we would expect to see the S&P 500 generally rise in the near term to converge with the 1800 level, after which the growth pace of stock prices will flatten out on average by comparison. Assuming, of course, no new noise events to distract investors!

Speaking of which, from Friday, 11 October 2013 through Thursday, 17 October 2013, we had the equivalent of a noise event appear in the CBOE's data for 2013-Q4's dividend futures (ticker symbol DVDE), to which we've specifically pointed in this week's edition of our chart. Here, we saw the amount of expected cash dividends to be paid out by the end of December 2013 rise from $9.147 per share to $11.32 per share in a single day.

During that week-long anomaly, there was no news indicating any massive spike in increased dividend announcements or even for any special or extra dividend payments, not that these latter payments should even affect the expected dividends per share number, which is supposed to be based upon regular dividends. And it didn't show up in IndexArb's bottoms-up dividend futures data, which proves to serve as a very useful reality check on the CBOE's more volatile data.

All in all, the magnitude and duration of the anomaly is evidence that the stock market isn't necessarily as efficient as some might like to believe.