Political Calculations
Unexpectedly Intriguing!
December 11, 2013
Dividends: Driven Back Into Recessionary Territory by REITs and the Fed

The number of publicly-traded U.S. companies announcing that they would be acting to cut their dividend payments rose back into recessionary territory again in November 2013. 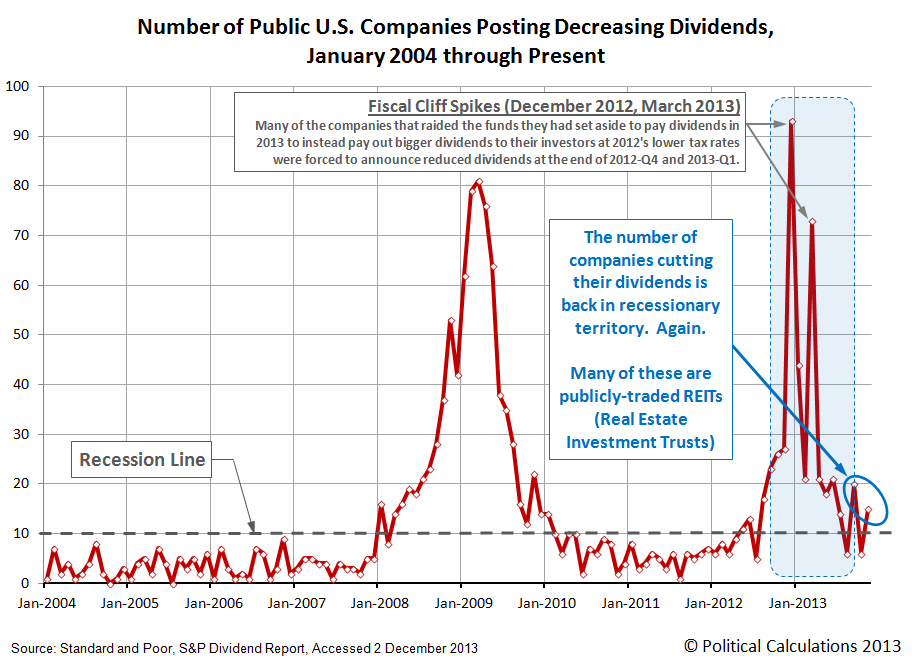 We believe we've identified where the distress in the U.S. economy is originating. A number of Real Estate Investment Trusts (REITs), which allow stock market investors to be able to invest in the nation's real estate markets, have been acting to cut their dividends.

This follows the apparent stagnation of the U.S. new home real estate market, which has seen price increases stall out in recent months as mortgage rates spiked upward, largely upon the speculation that the Federal Reserve will act to trim the amount of U.S. Treasuries and Mortgage-Backed Securities from its current buying pace of $85 billion per month, which has driven that increase in U.S. interest and mortgage rates.

For U.S.-based REITs, the impact of those increases has meant two waves of dividend cuts so far - the first in September 2013, when at least 10 REITS acted to cut their future dividend payments, with the economic pressures to cut dividends continuing as Fed officials have tip-toed ever closer to acting on their intentions.

Such is life for the extremely interest-rate dependent.