When we last looked at the U.S. housing market, we observed that median new home sale prices appeared to be stalling out. But what a difference a month makes, as both new data and the revision of data whose collection had been delayed as a consequence of the partial federal government shut down in early October 2013 makes it clear that new life is being breathed into the U.S. housing market.

Our chart below shows the relationship between median new home sale prices and median household income for each month since December 2000. 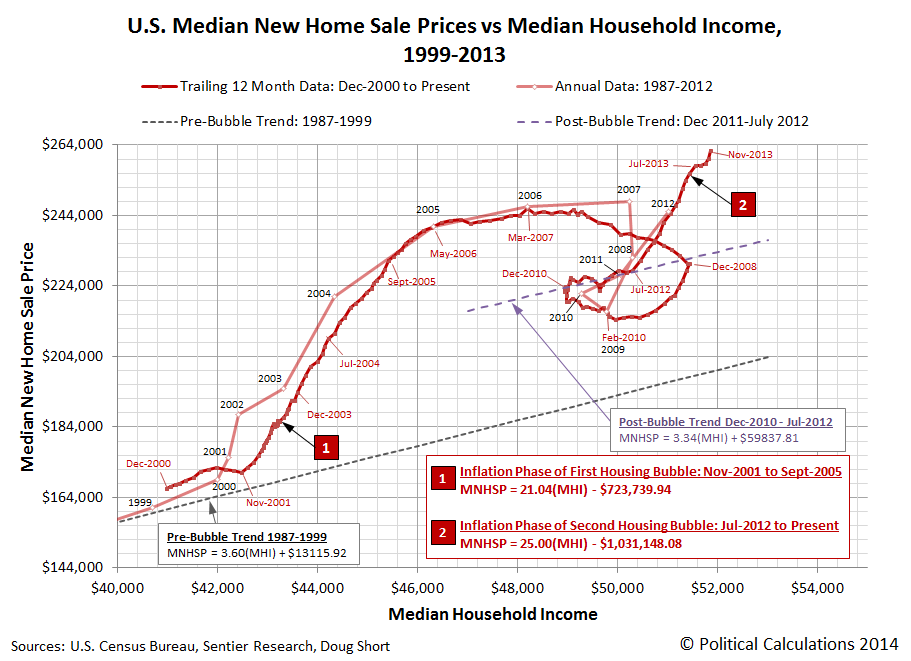 In this chart, we observe that the second U.S. housing bubble, which first began inflating after July 2012, has resumed inflating after stalling out in the months from July 2013 through September 2013. 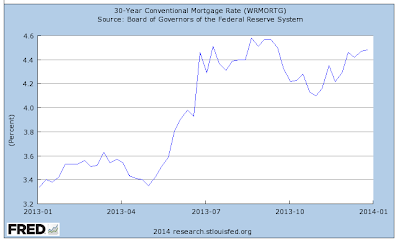 The reason why median new home sale prices stalled out during that period has a lot to do with speculation on the U.S. Federal Reserve's potential tapering of its current quantitative easing programs during that time, thanks to their effect on U.S. mortgage rates. Here, through the Fed's combined purchases of $45 billion worth of U.S. Treasuries and $40 billion worth of Mortgage-Backed Securities each month, the Fed's quantitative easing programs have been working to stimulate the U.S. economy, and the U.S. real estate market in particular, by lowering U.S. mortgage rates below their natural market level.

But with the increased probability that the Fed would begin cutting back its QE programs prematurely at its September 2013 meeting, U.S. mortgage interest rates reacted by rising nearly a full percentage point from where they had been in the months preceding the QE tapering speculation. Those rates then peaked just ahead of the Fed's September 2013 meeting.

But when the Fed decided to not begin tapering its purchases of U.S. Treasuries and Mortgage-Backed Securities at that time, mortgage interest rates responded by falling by about 0.3% on average, adding fuel and new life to the inflation phase of the second U.S. housing bubble, which we observe as the resumption of an upward trajectory for median new home sale prices with respect to median household income after September 2013.

It will be interesting to see what happens next. Following the end of November 2013, U.S. mortgage rates have once again risen to be close to the 4.5% mark, as speculation that the Fed would announce it would begin tapering its QE programs in December first gained steam, then became a reality when the Fed made it official at its Federal Open Market Committee's December 2013 meeting. If mortgage rates rise sufficiently high enough, they could once again put the brakes on the inflation of the second U.S. housing bubble, just as they did from July 2013 through September 2013.