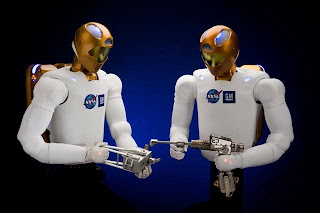 How at risk are you of having your job taken over by a robot or some other kind of automation technology?

One of the dangers that people who work in low wage-earning jobs face from politicians promising minimum wage or benefit increases is that they might get priced out of their jobs.

Here, as a result of government action, these workers might suddenly find themselves at extreme risk of either losing their jobs, or really, having the job itself disappear, if the cost of employing them rises above the cost of buying automation technology that can do the job more productively than can be done by people.

Mark Perry points to an example where that situation is increasingly playing out in America's wine country, starting with a video of the automation technology increasingly being used there to sort grapes in action:

The video above shows the Bucher Delta Vistalys R2 optical grape sorting system in operation. Modern Farmer featured the futuristic farming technology on its website this week in the article "How a Robot Can Sort 2 Tons of Grapes in 12 Minutes."

Head winemaker Steve Leveque is now using a $150,000 optical grape sorter at Hall Winery in Napa Valley, and he says "Most wineries can sort about two tons of grapes per hour, using 15 human sorters. We now processes the same amount of grapes in only twelve minutes, with zero human sorters."

We thought this example might make a great case study of the economics involved. First, let's look at the nature of the work itself. Wine Spectator describes the job of sorting grapes:

As freshly picked grapes enter the winery, they have to be sorted for quality, a process commonly known as triage in French. Traditionally, the bunches were dumped on a sorting table, where sorters would look over the clusters and separate the good from the inferior, removing unripe, diseased or damaged grapes, along with any leaves that snuck in. Today, the grapes usually travel down a conveyor belt past a line of sorters making the selections. The belt often vibrates to shake out bad grapes that might sneak in under cover of the good ones.

Technology is taking the place of human grape sorters, however. Optical laser sorters are now in place at many top Bordeaux estates. As the grapes move down a conveyor belt, an optic sensor recognizes anything that doesn't have the desired size, shape and color and blows it onto another conveyor belt with a blast from an air cannon.

Meanwhile, Wine Business describes the business aspects of the task, along with the potential labor savings a winemaker has for adopting the automation technology (free, registration required):

According to Lance Vande Hoef and Mea Leeman, sales reps for Pellenc and KLR respectively, these machines can process up to 2,000 berries a second, equaling about 10 to 12 tons per hour. They require three people to operate the optical berry sorting line and one or two forklift drivers to move the fruit. (Most of the wineries I visited were running about 6 to 8 tons per hour.)

Doing this job by hand would take eight to 12 people who could process 1½ to 2½ tons of fruit per hour. A vibrating sorting table can process up to four tons of fruit per hour using six to eight people. So not only does the optical eye sorting technology process the grapes faster and with less people, but most of the folks I talked to agreed that the end result was at least as good as anything they have done in the past, if not better.

In addition, one additional person is required to clean the automation equipment after a typical 8-hour shift for sorting grapes and perhaps also to transport it to a different location, so the automated technology in this example really requires 4-6 people, half of the 8-12 people required for performing this task manually.

Let's assume that they all earn the current federal minimum wage of $7.25 per hour. If we go to the upper end of the staffing requirement for the automated equipment, we're talking about 6 people, who would earn $3,770 each during the three month long period for a typical grape harvest in the United States, or $22,060 total.

Because we're going to compare this cost to the purchase of automation equipment, which we assume will involve monthly payments, we'll divide this figure by 12 to get the average monthly cost for labor over an entire year: $1,885. We'll next multiply this figure by 107.45%, to account for the employer's portion of federal FICA payroll taxes, so the employer's minimum monthly cost for employing the people in this example is actually $2,025.43. This is the value we'll enter into our tool below.

Next, because there's a cost for money to buy the automation equipment, which which we'll assume is represented by the interest rate that applies for a government-backed small business loan with a 10-year term. (Sure, the business might already have the money sitting in an account somewhere and not have to borrow the money, but there's an opportunity cost involved, since they wouldn't be able to invest it in other things once they choose to buy the automation equipment. The interest rate that a business would have to pay on an SBA-backed loan is a reasonable estimate of the opportunity cost in that case.)

Finally, because we're looking at the cost over an extended period of time, we'll need to take inflation into account. Here, our default data is the long-term average of inflation in the United States over the last 100 years.

The rest is just simple math....

What we find is that at the current federal minimum wage of $7.25 per hour, it's less costly to hire workers at that pay than it is to buy the automation equipment.

But what happens if we increase the minimum wage to $10.10 per hour, as President Obama and the members of his political party desire?

See what happens for yourself. At $10.10 per hour, six workers at this wage would earn $5,252 each during the three month long period for a typical grape harvest in the United States, or $31,512 total. Their basic average monthly income $2,656 and the minimum cost the business would have for employing them would be $2,853.87 per month, figuring in the employer's portion of federal FICA taxes once again. The $2,853.87 amount is the figure you should enter in the tool above to consider this scenario.

Once the cost of marginal labor rises too high, it makes more sense to replace minimum wage jobs with robots or other automated technology. And since the cost of marginal labor, in the form of the minimum wage, has been set arbitrarily, without any real concern for the people who lack the skills, experience or education needed to do more valuable kinds of work, those are the people who are going to find themselves on the outside of prosperity looking in.

Which is exactly where the people who propose minimum wage hikes would appear to want them to be. People whose incomes fall within the range that might be affected by a minimum wage increase would be very much at risk of having the jobs they do taken over by technology.