The number of publicly-traded U.S. companies announcing that they would be acting to cut their dividend payments remained in recessionary territory December 2013. 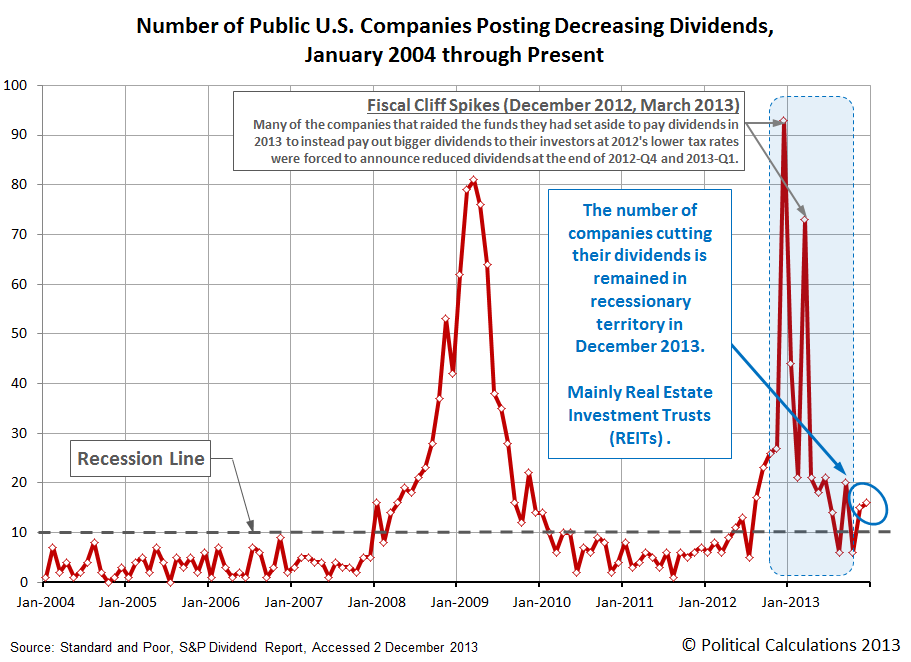 As in November 2013, it appears the economic distress is once again concentrated in the real estate sector of the U.S. economy, with Real Estate Investment Trusts (REITs) bearing the brunt of the negative actions. Amanda Alix of the Motley Fool describes the sentiment for investors in that industry:

Just when it looked like mortgage REITs were moderating, disaster struck. Anworth Mortgage (NYSE: ANH) announced a reduction in its quarterly dividend last Friday, and it was a doozy: a mere $0.08 per share, a 33% drop from the previous payout of $0.12.

Several days later, following the Fed's announcement that it would indeed reduce its mortgage-interest rate lowering QE programs by $10 billion per month, American Capital Agency (NYSE: AGNC) announced that it would once again cut its dividend payments to investors.

The driving factor behind the hits that REITs were taking in 2013 are rising mortgage rates, the higher costs from which are hurting their earnings potential, which is why the REITs' management is acting to cut dividends to investors - before they are forced to face outright losses.

But then, as in November 2013, such is life for the extremely interest-rate dependent who suddenly find themselves on the wrong side of a developing interest rate trend.