Political Calculations
Unexpectedly Intriguing!
06 January 2014
How Increasing Taxes Drove 2013's Stock Market Rally
Why did the stock market rise so much in 2013?

To really understand why, we have to begin by first looking at what investors expected to gain from owning stocks at the start of 2013 and compare it to what they actually gained during the year. The chart below shows the dividends per share that investors expected to be paid by the companies that make up the S&P 500 in 2013 and what they actually paid out in each quarter of that year: 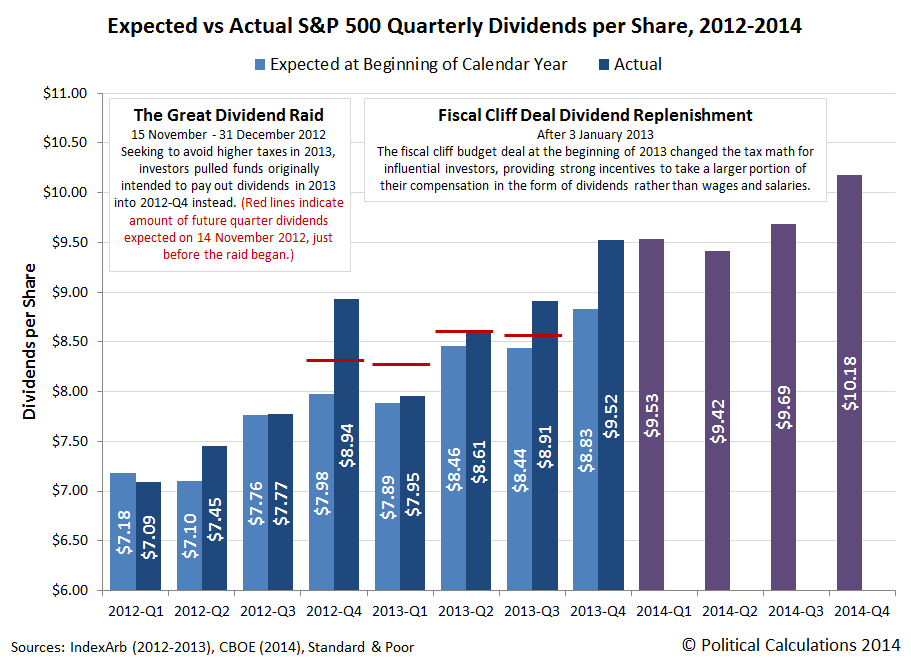 To provide additional context, we've also shown the amount of quarterly dividends per share that investors were expecting at the beginning of 2012 and were actually paid in each quarter of that year and are currently expecting to be paid throughout 2014 in the chart above.

Here, after President Obama refused to set a ceiling on how high the tax rates on investment income would rise in 2013 after the expiration of President Bush's 2001 and 2003 tax cuts, an event known as the so-called "Fiscal Cliff Crisis" where the tax rates on investment income would nearly triple if no tax deal could be reached with the U.S. Congress, influential investors at U.S. companies were first driven to extract money from the funds that had been set aside to pay out as dividends in 2013 to instead pay out before the end of 2012.

That rational reaction to the very real risk of facing much higher tax rates fueled what we've come to call "The Great Dividend Raid Rally", as stock prices rose in direct response to the increase in dividends that would be paid out before the end of 2012. That rally ran from 15 November 2012 through nearly the end of the year. 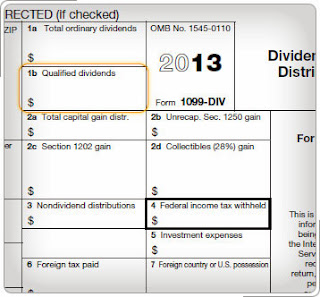 The resolution of the Fiscal Cliff Crisis on 3 January 2013 then changed the tax math for influential investors. Instead of nearly tripling as President Obama had originally desired, the taxes on qualified investment income was increased by 33%, as the marginal tax rates on investment income increased from 15% to 20% for high income earners. Meanwhile, the double taxation of dividends and capital gains also desired by President Obama through the corporate income tax was also avoided. (Note: There is an additional 3.8% tax that is being imposed upon investment income for high income earners as part of the Affordable Care Act, but that would have taken effect in 2013 regardless of the Fiscal Cliff situation.)

But since the changes in the nation's tax law in 2013 boosted the top income tax rate while also reducing the amount of deductible income that high income earners could claim, sharply increasing the amount of regular income taxes that they would have to be pay even if they weren't in the new top tax bracket, the Fiscal Cliff Tax Deal made it more advantageous for these individuals to take a larger portion of their compensation from the companies where they work in the form of dividends rather than as wages and salaries.

Consequently, these individuals spent much of 2013 redirecting money away from paying their own wages and salaries to instead pay out as dividends in 2013 and future years after the tax deal was made. This activity shows up in corporate financial statements as both reduced costs, which were obtained in good part by reducing the amount of wages and salaries they had been paying themselves, and as increased earnings, from which higher amounts of dividends would be paid.

Combined with a record level of share buybacks and other behind-the-scenes accounting changes, the amount of dividends per share increased dramatically throughout the year from where they started. Stock prices then followed in step as investors were strongly attracted to the increased dividend income they would gain by owning and holding stocks.

And that's the principal means by which the tax increases desired and obtained by President Obama produced a stock market rally, as tax-smart Americans took time out from their more genuinely productive activities to work out how to lawfully maximize their after-tax income by minimizing their tax bill to avoid having the rewards of their productivity penalized.

We wonder how much more strongly the economy would have grown in 2013 if only these smart Americans had been able to focus more upon genuinely productive economic activities instead of how to go about minimizing the negative impacts of President Obama's tax hikes.