We were wrong. Although it would make our math simpler to do, the data said that we're not going to be able to dispense with accounting for the echo effect in stock prices anytime soon.

We know that's the case because the market gave us an opportunity to calibrate the results of our math last week. Those results indicate that continuing to account for the echo effect will continue to provide a clearer picture of why stock prices are behaving as they are.

For our methods, large and sudden changes in stock prices provide the opportunity to calibrate our math. Since these kinds of changes in stock prices are not randomly-driven, but rather are the result of investors collectively shifting their forward-looking focus from one point of time in the future to another, which occur without significant changes in the expected income that investors might earn from dividends at those different points of time in the future, these events allow us to dial in the scale factor we use in our math.

In this case, it validated the scale factor we've been using since we switched to use the CBOE's dividend futures data in our calculations in October 2013. Let's go to the latest update of our favorite chart.... 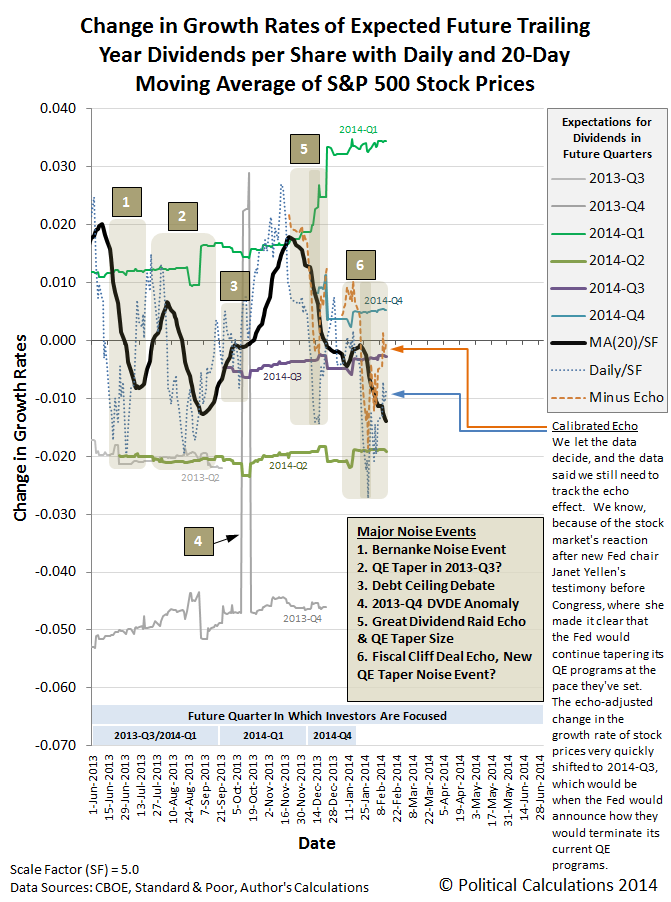 The calibration event was the conclusion of Janet Yellen's first congressional testimony as the chair of the Federal Reserve. In her testimony, she made clear that the Fed would continue its policy of tapering off its purchases of U.S. government-issued securities at the measured pace it has established.

Investors, who had previously shifted their attention to 2014-Q2 in advance of the Fed's last Federal Open Market Committee (FOMC) meeting where its Quantitative Easing (QE) policy is set, breathed a sigh of relief and began to shift their forward-looking focus in making investment decisions today to a more distant future: 2014-Q3.

It took a while for us to figure out why that future quarter would be the immediate focus for forward-looking investors in setting today's stock prices following Yellen's testimony. If we project ahead the Fed's FOMC meeting schedule with the established pace at which the Fed is tapering its QE bond buys, the Fed would be likely to announce its plans for how it will finally terminate its net purchases of U.S. Treasuries and Mortgage-Backed Securities at its September 2014 meeting, which coincides with the end of the third quarter of 2014.

We would not however be surprised if the focus of investors shifted to follow the trajectory defined by the expectations for 2014-Q4. Since investors had been focused on that more distant future quarter before 23 January 2014, and because that's the quarter in which the Fed's QE bond buying would actually end, it would make sense for investors to shift at least a portion of their forward-looking focus to it.

Speaking of trajectories, let's see how stock prices in February 2014 are keeping pace with the different levels that the respective focus on the dividends that would be earned in different future quarters would place them, as the future appeared on 29 January 2014. 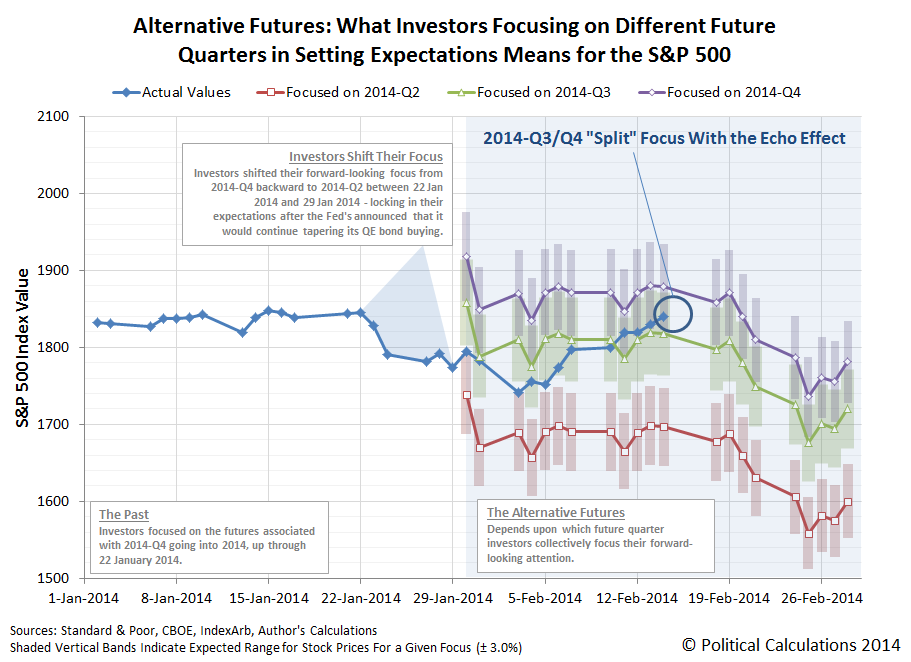 If we account for that particular short-lived echo, the decline is still there, but not as great. We're going to test out treating this particular echo like an error, where we would expect that the error bars we've shown around the midpoint trajectory for each alternate future will adequately capture how stock prices are likely to behave during this time. Given the particular echo, we would expect that the actual trajectory will fall in the upper end of the trajectories indicated for a focus on the future quarters of 2014-Q3 and 2014-Q4.

Provided, of course, no new noise events or shifts in investor forward-looking focus in the mean time!