After more than six years, the U.S. private sector has at last regained the jobs lost in the Great Recession.

The economy added 192,000 jobs in March, the 42nd consecutive month of growth, the Bureau of Labor Statistics reported Friday. All the gains were in the private sector, pushing nongovernment employment to 116 million, just above the prior record set in January 2008, when the recession was just beginning. The private sector lost 8.8 million jobs in the recession and has gained 8.9 million since.

But the wounds of the recession are far from fully healed. Total payrolls remain more than 400,000 below their prior peak due to deep cuts in the number of government workers, especially at the state and local level. And the adult population (16 years and older) has grown by 14 million since the recession began, meaning the U.S. job market is nowhere close to fully recovered on a per-capita basis. The long-term unemployment crisis drags on, the legacy of what is by some measures the slowest recovery since World War II.

Going by the age demographics of the U.S. civilian labor force, we observe that the jobs recovery for U.S. adults, Age 25 and older, as February 2014's data turned out to not be an outlier as we had previously suspected.

We also observe that the jobs data for young adults, Ages 20 through 24, is now just one good jobs report away from also fully recovering the jobs lost by this portion of the U.S. workforce in the aftermath of the December 2007-June 2009 recession.

But there is one demographic group for whom there has been no recovery at all.... 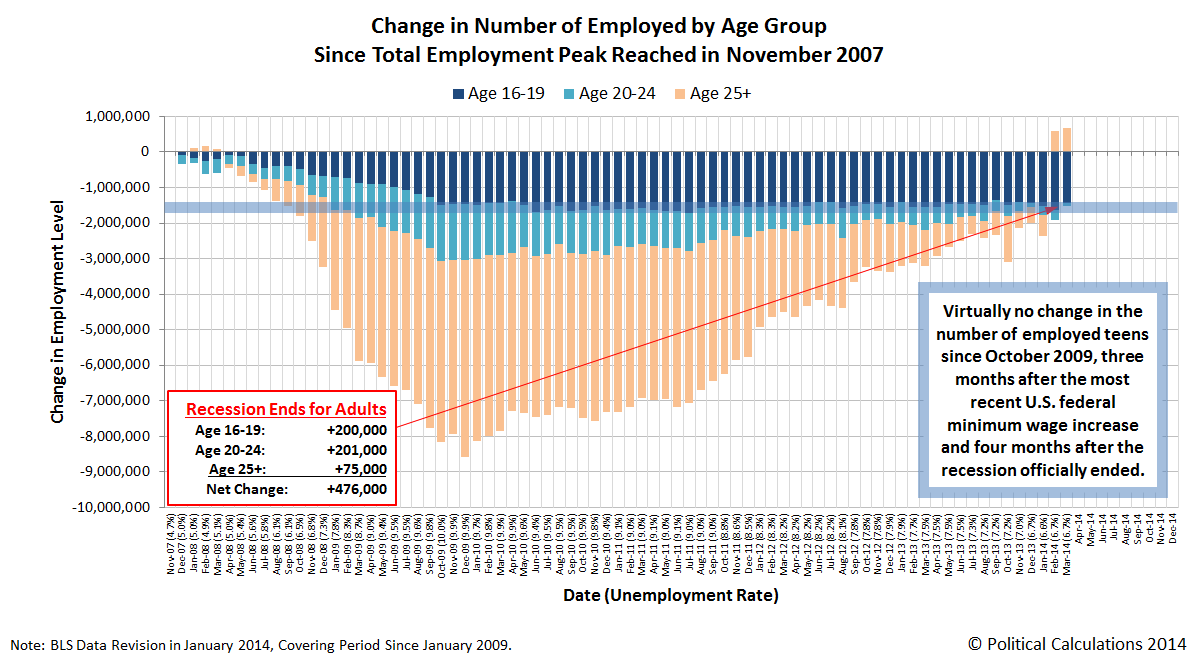 Curiously, the youthful Casselman completely misses the one portion of the U.S. private sector labor force that has effectively experienced no recovery from its recession bottoms in his reporting: U.S. teens Age 16 through 19.

The reduction in jobs for government workers since the end of the recession has largely come about as a result of the failure of the U.S. economy to recover strongly enough to continue sustaining the growth of government payrolls, especially at the state and local level.

Even with such a delayed impact, government workers have still experienced a far milder recession than the private sector did. And in fact, many of the job losses that have occurred in the public sector could have been avoided if government employees were willing to modestly trim their retirement benefits to levels consistent with those available in the private sector.

But they had other priorities. It's just a shame that they're not the same as those of regular Americans.