Political Calculations
Unexpectedly Intriguing!
19 May 2014
Freaking Out on the S&P 500

If stock prices dipped just one percent after reaching their all-time high last week, why are investors so freaked out?

The answer has to do with the sudden onset of a new noise event in the stock market, which began making its present known around 2:40 PM EDT on Wednesday, 14 May 2014. Our accelerations chart reveals the sudden downward shift of stock prices with respect to the change in the growth rate of dividends per share for each future quarter from now through 2015-Q1: 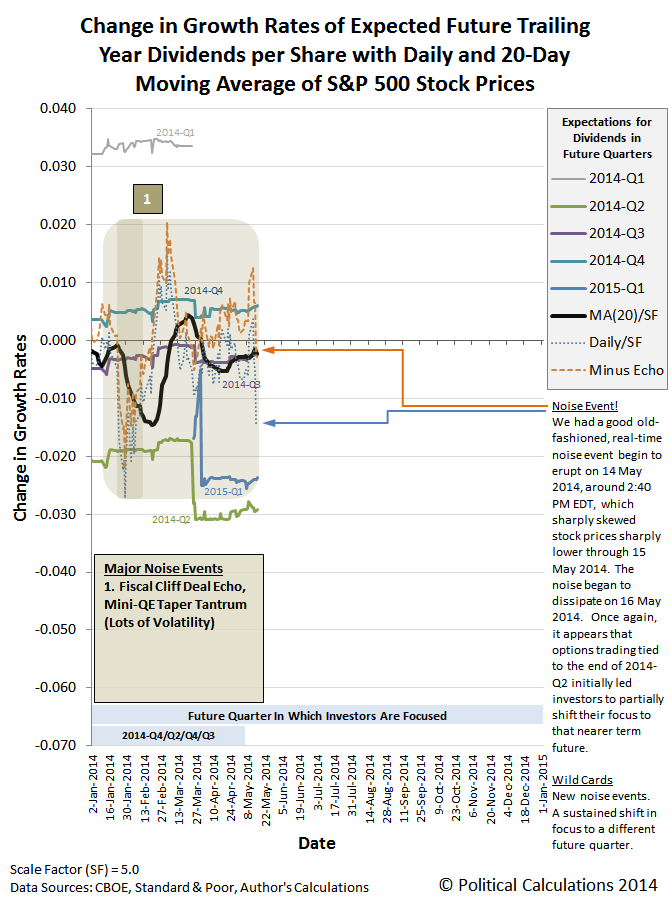 Applying what we've been learning about the nature of noise events - namely, that they really represent events where investors suddenly and temporarily shift some or all of their forward-looking focus in setting today's stock prices toward a different point of time in the future from where they had been, finding the specific mechanism that would appear to have driven the sudden shift took very little effort for us last week, thanks to an aside offered by UBS' equity and derivative strategist Julian Emanuel in a discussion with CNBC:

"As an aside, there's been some concentrated large-size sellers of June out-of-the-money (S&P 500) options—1910 and 1920 calls, and on the downside 1840 and 1850 puts," Emanuel said. "As the market goes toward either of those strike prices, the possibility for acceleration increases through the strike prices."

As we can see by each of the dividend futures in our chart above, the expectations for the future didn't meaningfully change last week. But what Emanuel's observation confirms for us is that the point of time that investors were focused upon changed. In this case, that forward-looking focus changed from 2014-Q3, where it has been for weeks, to suddenly pull back somewhat toward 2014-Q2 ("June"), corresponding to the unusually concentrated put activity.

This is very similar to what we observed for the events of 26 March 2014 in our now infamous "experiment".

The good news is that it would appear that the noise from this event has already begun to dissipate. But still, the presence of the noise has spooked a number of investors, for whom the effect of the noise has placed stock prices considerably below the level that they might have otherwise reasonably expected. 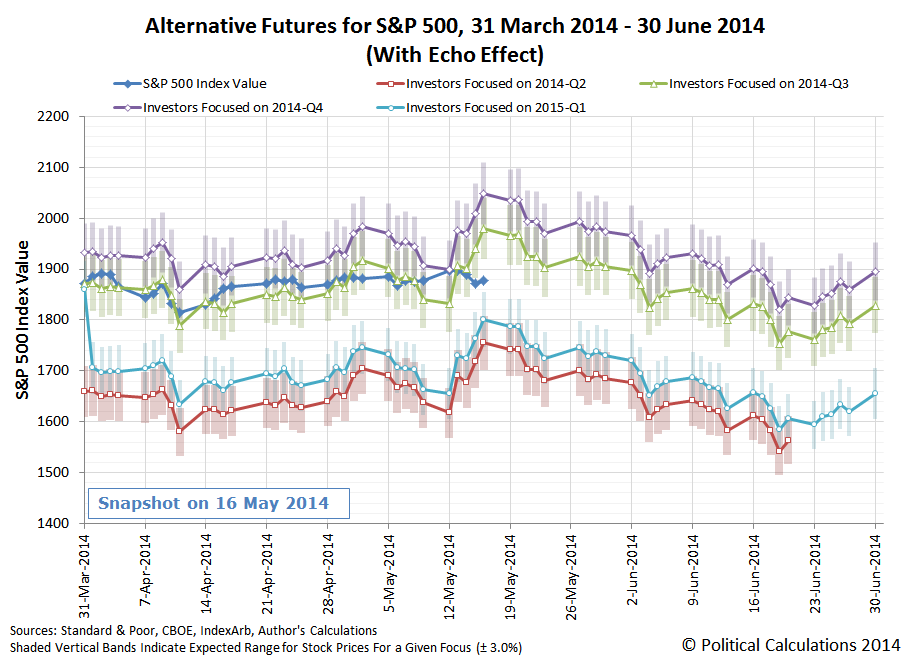 Assuming that the last noise event continues to dissipate and isn't followed by any additional new noise events, our best thinking is that stock prices will once again converge with the future as defined by the dividends expected for 2014-Q3, which would be positive for stock prices in the short term.

But in the longer term, if that convergence is sustained, it would ultimately lead stock prices lower, where it seems a reversion to the long-term mean may be in the works. More on that later this week.... 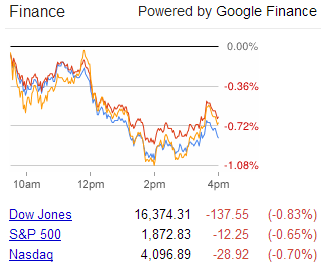 Update: 20 May 2014: New York Fed President William Dudley, who had previously been considered an interest rate dove in favoring hiking rates later rather than sooner, indicated today that such hikes might now occur sooner rather than later. Other influential Fed Presidents have indicated that such an action may come as early as by the end of 2015-Q1.

If you look at our accelerations chart above, what effect do you think that shifting the focus of investors toward 2015-Q1 would have on stock prices today? P.S. - Also try to guess at what time that Dudley began speaking (hint: a minor decline from the day's mid-day peak suddenly steepens!...)

So did stock prices behave any differently on Tuesday, 20 May 2014 from what we should expect under these circumstances?

The bottom line: it's a new noise event - one following the one we described in the post above. You can thank the Fed's minions for it.