Approximately every three months, we take a snapshot of the expectations that investors have for the S&P 500's trailing year earnings per share. The chart below represents the Spring 2014 update for our series, showing what has changed for investors in the three months since February 2014: 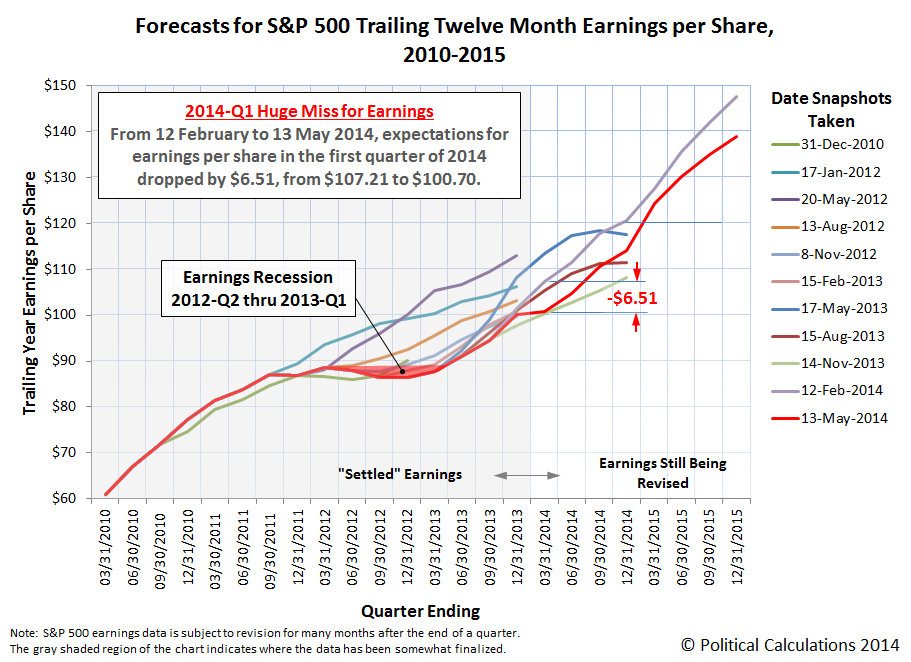 So what got the hopes of investors up so much in mid-February 2014?

The answer might be a misplaced belief in economic momentum - investor expectations for earnings in 2014-Q1 were buoyed upward by companies reporting stronger than expected earnings for the fourth quarter of 2014, as indicated by contemporary reporting:

The major US indices registered their strongest week so far this year and injected investors with optimism. The combined effect of better-than-expected earnings reports and a growing confidence in the economy gave a boost to US indices. The S&P500 rose by 2.35% reaching 1,839, the Dow added 2.28% to its value to close at 16,150 points on Friday, while the technological Nasdaq100 increased by 2.86% to end the week at 3,663 points.

Curiously, investors didn't appear to believe that harsh winter weather would be a significant factor for the quarter:

The Federal Reserve said factory production plunged 0.8 percent in January, following gains of 0.3 percent in both December and November.

Investors are hopeful that much of the weakness seen in recent economic reports is due in large part to the unusually cold winter weather this year, said Kristina Hooper, US investment strategist at Allianz Global Investors.

"Investors are choosing to look at very mixed data through a positive lens," Hooper said.

In retrospect, investors were correct to discount the negative impact of harsh winter weather, but misread the signals that were being sent by U.S. automakers at the end of November 2013, long before the cold of winter had any impact, indicating that they had misjudged consumer demand going into the end of the year and would need to cut their production as the sales weren't there to support it. The same was true for homebuilders, where the new home sales that might drive purchases of appliances, furniture and carpeting also were decelerating long before Winter 2014 arrived.

In other words, the poor economic performance of 2014-Q1 had little, if anything, to do with unusually cold winter weather in much of the U.S., which is the real reason why investors have had to deflate their expectations for that quarter's earnings.

And as you can also see in the chart above, they've deflated their future earnings expectations all the way through the end of 2015.