How many dividend paying companies are there in the S&P 500?

Through 9 July 2014, we count 425 companies among the components of the S&P 500 that currently pay cash dividends to shareholders. Our chart below shows how their number has changed since 1980, which we note is largely in response to how the U.S. federal government has set the tax rates for both dividends and capital gains. 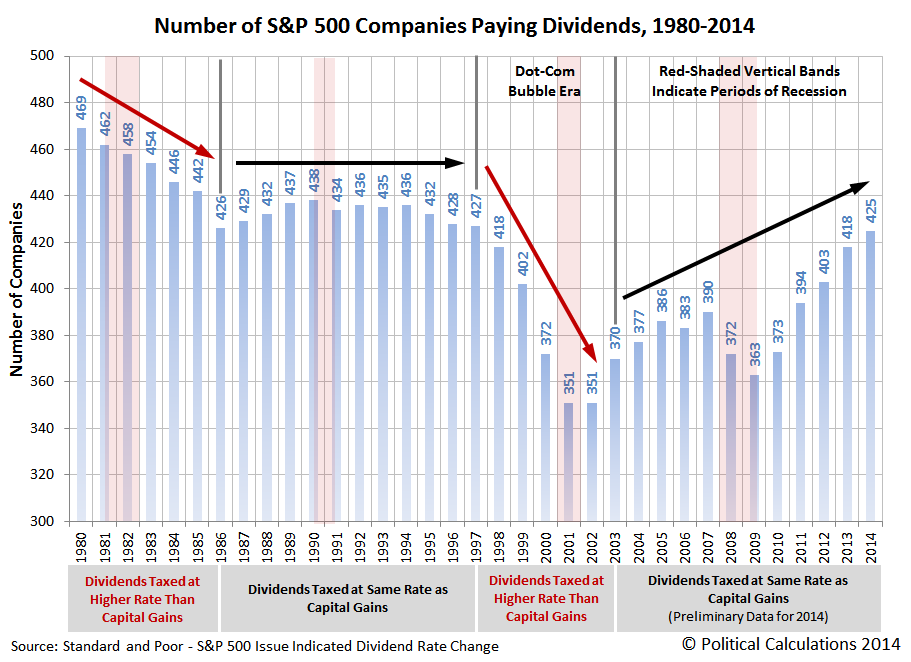 In terms of the most recent trend, 85% of the companies in the S&P 500 are now paying dividends, up from the 70.2% that were in 2002, the last full year before the tax rates for both dividends and capital gains were once again set to be equal to one another.

While recessions tend to temporarily lower the number of companies paying dividends, which we would expect since some of the 500 companies that make up the S&P 500 would lack the earnings needed to pay dividends during these periods of contraction in the U.S. economy, we find that the biggest driver of what affects the number of companies paying dividends to individual shareholders, pension and retirement plans, et cetera is the relative tax rates of dividends and capital gains with respect to each other.

That stability ended with the Taxpayer Relief Act of 1997. Here, the capital gains tax rate was reduced from 28% to 20%, while the tax rate of dividends was held at the 28% level. As we can see in the chart above, this change in tax law coincided with a dramatic drop in the number of companies within the S&P 500 that paid dividends, which plummeted from 427 in 1997 to 351 in both 2001 and 2002.

The Taxpayer Relief Act of 1997, by the way, caused the Dot-Com Bubble to form in the U.S. stock market.

That decline in the number of S&P 500 companies paying dividends wasn't reversed until 2003, with the passage of the Jobs and Growth Tax Relief Reconciliation Act, which once again equalized the tax rates of both capital gains and dividends, but this time at 15%.