How differently would the U.S. economy have performed without the Federal Reserve's efforts to stimulate the economy through its most recent Quantitative Easing (QE) programs?

We first tackled the question in September 2013, in which we found that the Fed's QE efforts boosted the performance of the U.S. economy by roughly one dollar for each dollar it used to buy MBS and U.S. Treasuries in its QE programs, which was more than enough to avoid what otherwise would have been a major Greek or Spanish-style contraction in the U.S. economy from the large tax hikes that took effect in the U.S. in 2013.

By the third quarter of 2013, the Federal Reserve was coming to the conclusion that it would not need to continue its QE programs, as the U.S. economy suddenly seemed to achieve some degree of organic growth that had previously been absent, above and beyond what the Fed was able to achieve. That strength continued into the fourth quarter and the Federal Reserve announced that it would begin reducing its QE-related purchases of MBS and U.S. Treasuries. The Fed has since tapered their purchases of these securities every six weeks by $5 billion per month for each type, which would see their buying activity end sometime in the fourth quarter of 2014.

We haven't discussed this data since December 2013, so now that the BEA has released its annual revision of the United States' Gross Domestic Product (GDP) , we're going to put our Keynesian-style GDP multiplier tool to the test once more and incorporate all the revised and updated GDP data we now have, which covers the period through the first estimate of GDP in the second quarter of 2014. The chart below reveals the results of our newest counterfactual exercise. 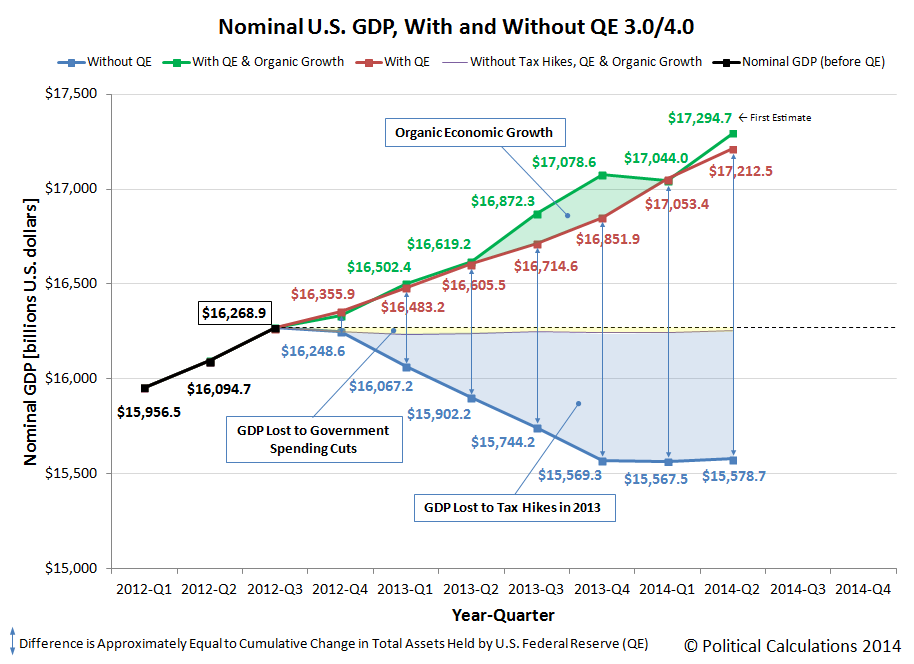 Before we continue, we should note a major change in our assumptions regarding the impact of the 2013 tax increases. Here, with the increase in payroll, income, investment and Affordable Care Act taxes implemented so early in 2013, we assume that in 2014, Americans have largely adapted to their higher tax burdens enough so that the negative shock from these increased taxes is no longer weighing against the growth of GDP. Their negative impact is now best described as a permanent loss to the U.S. economy.

What we observe now is that the organic growth that first appeared in the third quarter of 2013 had evaporated by the first quarter of 2014. That makes sense when you realize that this growth was really the effect of a record bumper crop for almost every agricultural crop grown in the U.S., which benefited from ideal growing conditions through much of 2013. Those record crops were harvested in the third quarter of 2013, accounting for much the apparent boost in economic growth in that quarter, and then into the fourth quarter of 2013, as much of the harvested crops were subsequently exported from the U.S. to other markets, such as China.

By the time the first quarter of 2014 rolled around, all that additional economic activity resulting from the bumper crops of 2013 was gone. Consequently, GDP fell back to the level that it would otherwise have been without the benefit of those bumper crops for the economy. The level that would be predicted after considering the fiscal drag from previous tax hikes, minor government spending cuts begin offset dollar for dollar by the Fed's QE programs.

We next observe that the first estimate of GDP in the second quarter of 2014 is above the level that would be expected in our counterfactual model. That could be due to the economy showing some small signs of hopefully more sustainable organic growth once again, or perhaps could be due to the BEA overestimating GDP growth in its first estimate of GDP for the quarter once again, as it originally did by a substantial margin for the first quarter of 2014. The BEA will revise its estimates of GDP for the second quarter of 2014 twice more during the next two months.

As the Fed's tapering of its MBS and U.S. Treasury purchases continues, we can expect a lessening positive contribution from that activity. That means that economic growth in the U.S. throughout the rest of 2014 is likely to be muted at best given how it has performed outside of what now clearly appears to have been exceptional circumstances.

About the GDP Multipliers Used in Our Counterfactual Analysis 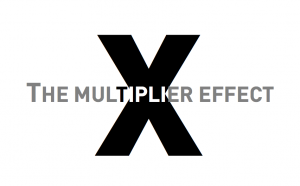 We featured a discussion of the fiscal multipliers for government spending and tax policies in our previous discussion of Spain's disastrous economic choices of 2012. At present, we're continuing to assume that the fiscal multiplier for the Fed's quantitative easing programs is approximately 1.0, in the absence of data that might contradict that figure. As yet, there really isn't any data to contradict this estimate, although with the latest GDP revision, the data suggests the multiplier rounds down to that figure.