Going by the year-over-year growth rate of of the value of trade between the United States and China, which we've adjusted to account for the changing currency exchange rate for each nation's currency, it would appear that the U.S. economy rebounded in June 2014, while China's economy decelerated slightly. 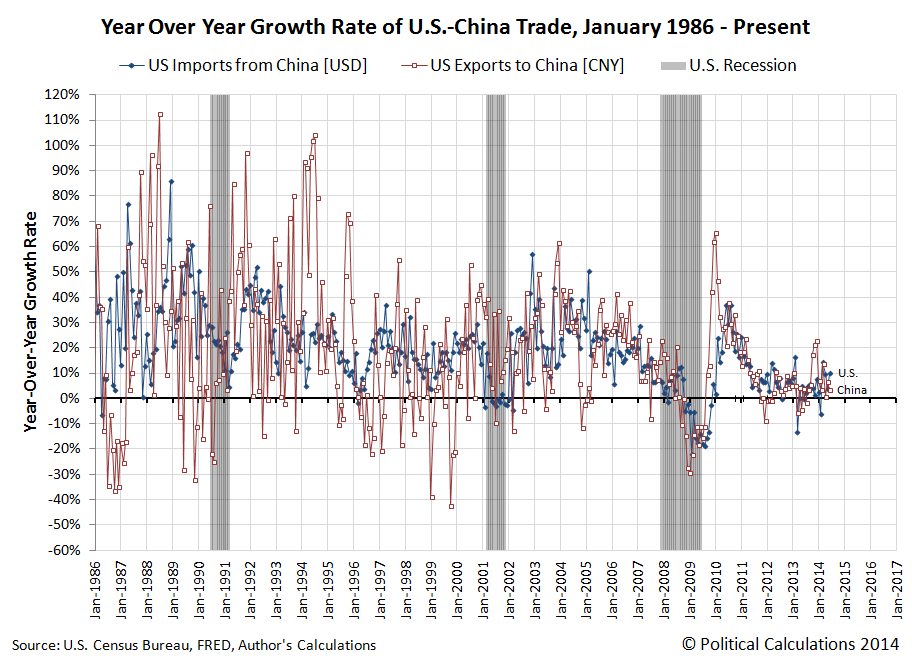 At the same time, the growth rate of the value of the U.S.' exports to China grew substantially slower in 2014-Q2 than in 2014-Q1, falling to 3.7% in the second quarter compared to the average 8.3% that the U.S. exports increased in the first quarter.

That recent trend appears set to continue into the third quarter of 2014 according to China's less reliable trade data:


BEIJING—China's exports surged in July on the back of strong demand from the U.S., Europe and Southeast Asia, while imports fell, surprising markets on both counts and resulting in a record monthly trade surplus.

The news was largely welcome in Beijing, as the world's second-largest economy struggles to regain growth- and foreign-trade momentum after this year's weak start, although negative import growth underscores continued weak domestic demand.

According to figures released by the General Administration of Customs on Friday, exports expanded 14.5% year-over-year, nearly double the 8% growth forecast by 15 economists in a Wall Street Journal survey and a sharp increase from the 7.2% year-over-year increase recorded in June.

Imports, meanwhile, fell 1.6% during the same period, following a 5.5% on-year expansion in June. The survey predicted a 3% rise.

The rate of growth of the value of goods imported by a country provides a key indication of its relative economic health. A nation that is experiencing more robust economic growth will tend to import an increasing value of goods, while a nation importing a falling level of goods indicates that its economy is experiencing contractionary conditions.