How many of you recall what we wrote at the beginning of September 2014 about the dynamics of a stock market where investors are shifting their focus from one point in time in the future to another?

What we observe is that at present, investors would appear to be focused on 2014-Q4 in setting today's stock prices, which is a relatively recent development - one that has come about largely as a result of better than expected earnings reported by many companies in the S&P 500 in recent months. Prior to that development, investors had been largely focused on 2015-Q2, which is the period during which many believe the Fed will begin hiking short term interest rates.

But the danger in focusing on the fourth quarter of 2014 is such that any shift in focus by investors to another future quarter would be associated with either flat or falling stock prices. And then there is the question of what expectations of the future will replace those of the soon to expire 2014-Q3. Or the next to expire 2014-Q4. Investors can hold their attention on 2014-Q4 through the end of the third quarter of 2014, but that won't be an option for long in the fourth quarter.

It's that kind of scenario with expectations that explains why the month of October is historically feared by investors, because it can come with the greatest downside potential when compared with every other calendar month. If those new expectations are more negative than the ones they replace, then the stock market's reaction will likely be as well.

As best as we can tell, investors were switching their forward-looking focus back and forth between 2014-Q4 and 2015-Q2 as they were making their investment decisions and setting stock prices last week, which accounts for the volatility. Our rebaselined model of the potential alternative trajectories that stock prices are likely to take perhaps best illustrates what we think was going on: 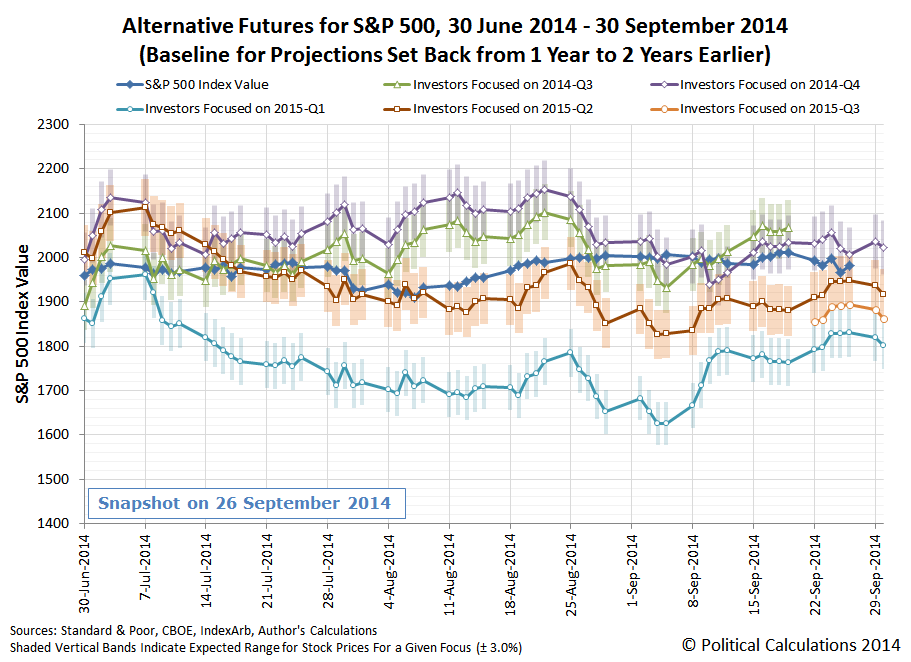 Now for the bad news. We got the data for what the S&P 500's dividends are expected to be in 2015-Q3, and the scenario isn't good. Here's what we see after we calculate the change in the year-over-year growth rate from quarter to quarter for each of the future quarters for which we have data. 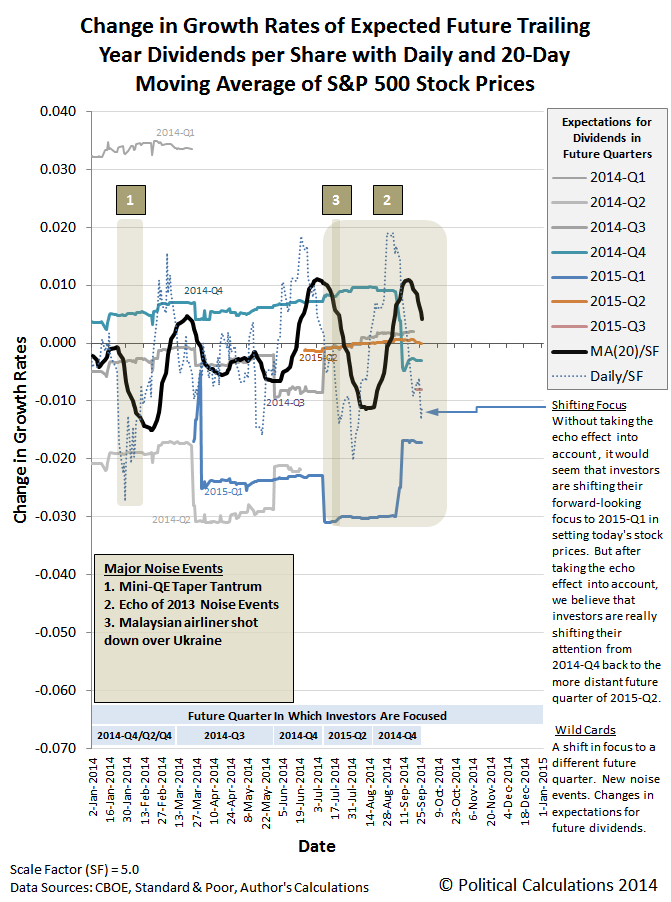 In terms of basic growth potential, none of the future quarters is positive. The best case scenario, where investors would be steadily focused on 2014-Q4 or 2015-Q2 in setting stock prices, would be consistent with stock prices largely moving sideways within a relatively narrow band (say plus or minus 5%).

If investors shift their focus among these and the other alternative futures, then stock prices are likely to be very volatile, with a great likelihood of decline. The worst case scenario here would be for investors to suddenly make their investment decisions according to the expectations associated with 2015-Q1, which would coincide with a crash for stock prices in the long dreaded 10% (or more) correction.

The only thing that we will guarantee is that sometime during this next quarter, in the absence of a major fiscal crisis, investors will stop paying attention to 2014-Q4.