Another month, another 15 companies announcing that they'll be paying less out in dividends in the future, making August 2014 the tenth consecutive month in which the number of companies acting to cut their dividends has been elevated above the "Recession Line": 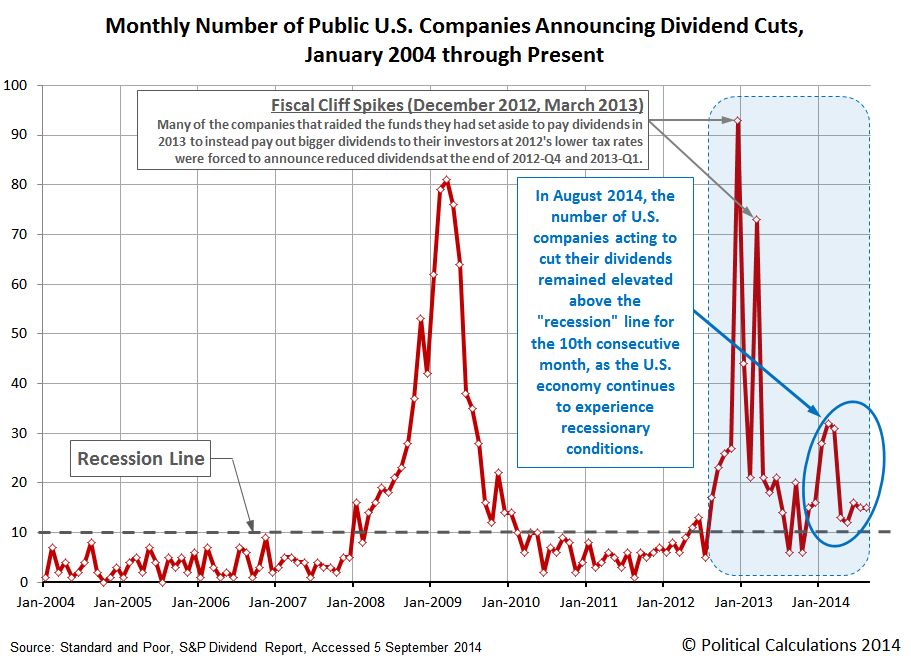 Alternatively, if we ignore the third quarter of 2013, when the number of dividend cutting companies briefly dropped below the Recession Line, we could describe the U.S. economy as having been in microrecession since August 2012, which really makes this past month the two-year anniversary of that economic state. A microrecession might be described as being when recessionary conditions are present in the U.S. economy, but which are too limited in scale, scope or duration to qualify as an official period of recession according to the standards of the National Bureau of Economic Research.

We believe the Federal Reserve's QE 3.0/4.0 programs are directly responsible for preventing the U.S. economy from falling more definitively back into recession during this period. Those economy stimulating programs have been running from September 2012 through the present, coinciding with the U.S. economy's state of microrecession.

Looking back at the dividend data, through August 2014, that now makes 71 U.S. companies that have taken that action in the five months since the U.S. economy contracted sharply during the first three months of 2014, when 91 companies acted to cut their dividends.

Most of the companies that have acted to cut their dividends in 2014 tend to have smaller market capitalizations. According to Standard and Poor (Excel Spreadsheet), just four companies in the S&P 500 have had sustained dividend cuts during 2014:

The industries in which these companies are part have been struggling in 2014, which is the principal reason for the lackluster performance of the Russell 2000 index compared to the S&P 500 for the year. The main difference between the small market cap companies of the Russell 2000 and the large market cap companies of the S&P 500 is that the larger companies that make up the S&P's stock market index are better able to weather downturns in their industries and therefore have less of a need to cut their dividends.