Political Calculations
Unexpectedly Intriguing!
September 8, 2014
What's Freaking Out the Billionaires for the S&P 500? 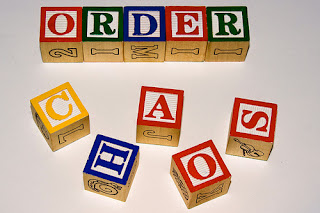 Tyler Durden pays attention to the things that billionaire investors say and do so we don't have to. And it would seem that a number of them are starting to freak out over stock prices:

"The stock market is at an all-time, but economic activity is not at an all-time," explains billionaire investor Sam Zell to CNBC this morning, adding that, "every company that's missed has missed on the revenue side, which is a reflection that there's a demand issue; and when you got a demand issue it's hard to imagine the stock market at an all-time high." Zell said he is being very cautious adding to stocks and cutting some positions because "I don't remember any time in my career where there have been as many wildcards floating out there that have the potential to be very significant and alter people's thinking." Zell also discussed his view on Obama's Fed encouraging disparity and on tax inversions, but concludes, rather ominously, "this is the first time I ever remember where having cash isn't such a terrible thing." Zell's calls should not be shocking following George Soros. Stan Druckenmiller, and Carl Icahn's warnings that there is trouble ahead.

Even market guru Robert Shiller is concerned about the potential for a crash, even though he doubts the value of his cyclically adjusted price earnings ratio (CAPE) to forecast the timing of one.

'As of yesterday my price earnings ratio - I call it CAPE for cyclically adjusted price earnings - was 26.3. There's only three major occasions in US history back to 1881 when it was higher than that,' says Shiller.

Asked for a worst case scenario, he says: 'Well, the price earnings ratio reached its all-time low in the United States in 1921, when it fell under 6. So we're at 26. It could go to 6.

Well, that wasn't very helpful at all, was it?

For a man who has made his reputation in the field of behavioral finance, which seeks to explain how stock prices behave using insights from psychology, it's extremely odd that Shiller has never made the connection between expectations and how stock prices work. It's all the more odd since the historic stock market data that Shiller assembled to support his own work is what we've used to quantify them. In so many ways, Shiller is to the study of stock prices what Tycho Brahe is to the field of astronomy.

So, let's look at expectations, shall we? The chart below shows the change in the growth rates of expected future trailing year dividends per share (a.k.a. "rational future expectations") for each quarter from the present through 2015-Q2 (we'll start getting the data for 2015-Q3 later this month). 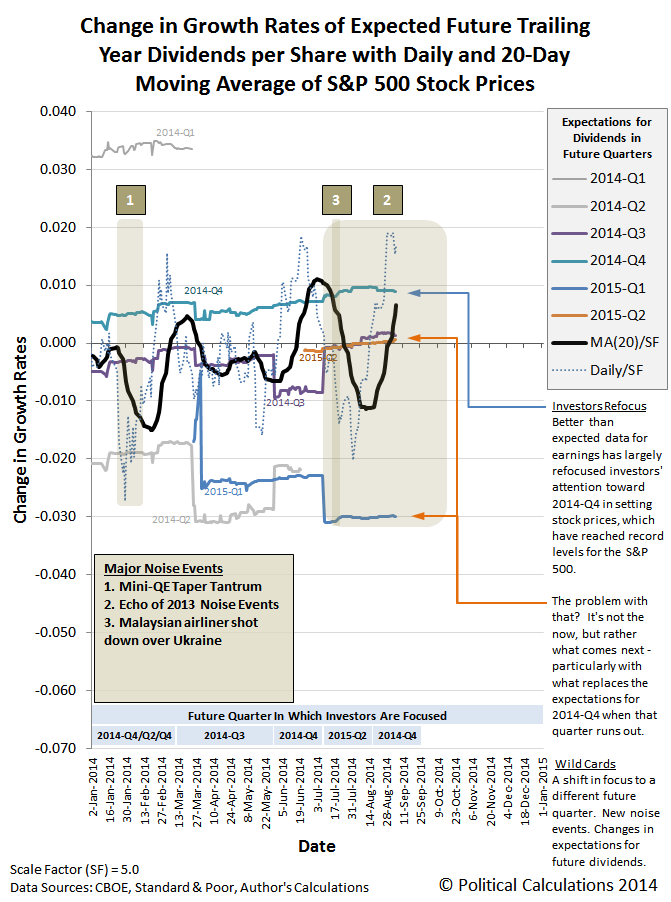 What we observe is that at present, investors would appear to be focused on 2014-Q4 in setting today's stock prices, which is a relatively recent development - one that has come about largely as a result of better than expected earnings reported by many companies in the S&P 500 in recent months. Prior to that development, investors had been largely focused on 2015-Q2, which is the period during which many believe the Fed will begin hiking short term interest rates.

But the danger in focusing on the fourth quarter of 2014 is such that any shift in focus by investors to another future quarter would be associated with either flat or falling stock prices. And then there is the question of what expectations of the future will replace those of the soon to expire 2014-Q3. Or the next to expire 2014-Q4. Investors can hold their attention on 2014-Q4 through the end of the third quarter of 2014, but that won't be an option for long in the fourth quarter.

It's that kind of scenario with expectations that explains why the month of October is historically feared by investors, because it can come with the greatest downside potential when compared with every other calendar month. If those new expectations are more negative than the ones they replace, then the stock market's reaction will likely be as well.

So we actually do have some idea of when stock prices will change. How much they will change will hinge upon three factors: the future point of time to which investors turn their attention next, the expectations that correspond to that future point in time, and how those expectations might themselves change.

Sorting it all out is complex, but not difficult. It's not like stock prices haven't always behaved this way.