The unfortunate news of yesterday's Parliament Hill terrorist incident in Ottawa provides the background for a quick study of the impact that such events can have on the U.S. stock market. We classify these kinds of events as noise events, since they have no effect upon the fundamental drivers of stock prices, nor do they have any lasting impact upon stock prices.

But they can have a short term effect, which we'll attempt to quantify. To do that, we'll do an event analysis using the basic timeline that we've been able to put together from reports by The Globe and Mail, International Business Daily and CTV.

What we're looking for specifically in our event analysis is the point in time at which U.S. investors first came to appreciate the full seriousness of the incident, from which we can calculate the subsequent impact upon stock prices. Here, we'll be taking advantage of our previous observations that it only takes investors some two to four minutes to react to news that they were not previously expecting.

We've annotated the chart below showing the value of the S&P 500 stock market index on 22 October 2014 with the major news events documented by our timeline news sources. 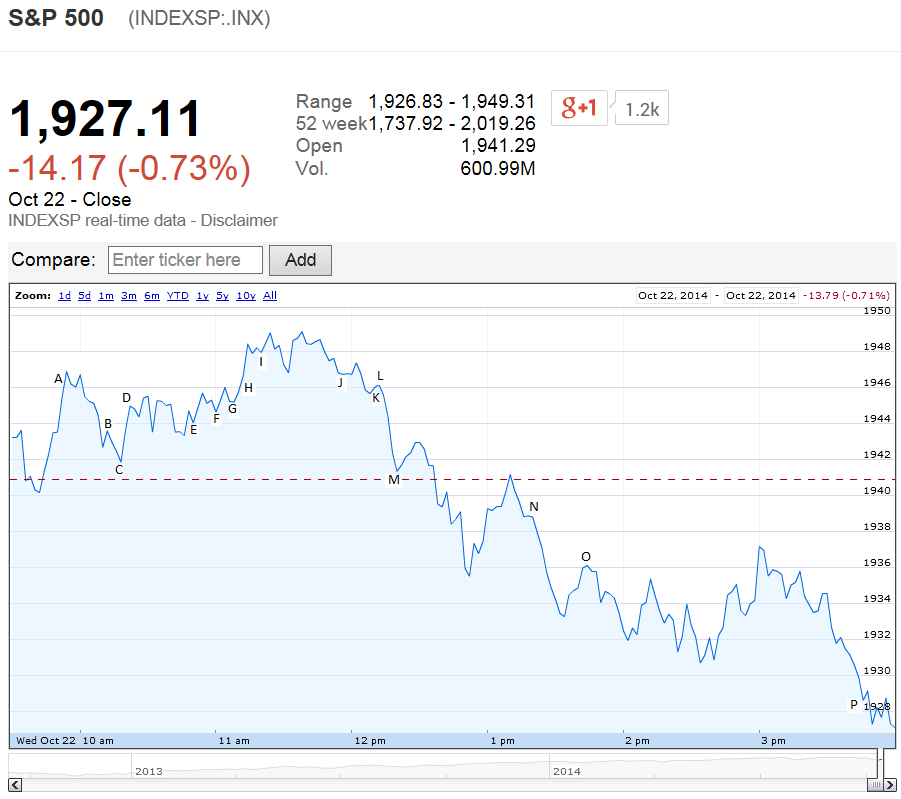 The table below lists the major events indicated by the corresponding letters shown on the chart above.

The Parliamentary Buildings were still locked down when the market closed on Wednesday, 22 October 2014, with police continuing their investigation of the incident.

We see that it was the reporting of the exchange of gunfire in the Parliament Buildings at 12:10 PM EDT [K] that prompted the reaction in the U.S. stock market, as stock prices began falling as investors immediately adopted a more "safety"-oriented investing strategy - selling off stocks to capture recent gains. From 12:10 PM to the end of trading, the S&P 500 fell from 1946.16 to 1927.11 - a decline of 19.05 points, or just shy of 1% of the S&P 500's index value at the time U.S. investors learned of the seriousness of the event.

That's far less than the potential +/-3% range of the typical "noise" level that we expect for the daily variation in stock price prices that is built into our forecast model. Which is to say "hardly any impact at all." And because it's just noise, even that will quickly fade. Terrorism is the act of the impotent.

There has though been a very real loss. A much finer man than the Islamic terrorist assailant will no longer be among us, a man who died guarding a memorial to those who died in war long before him. And as did they, with honour.