Political Calculations
Unexpectedly Intriguing!
November 12, 2014
China in Trade Recession and What Lurks Below the iPhone Economy

As measured by the year-over-year growth rate of the total value of the goods it imports from the U.S., in September 2014, China's economy sank into recessionary territory. 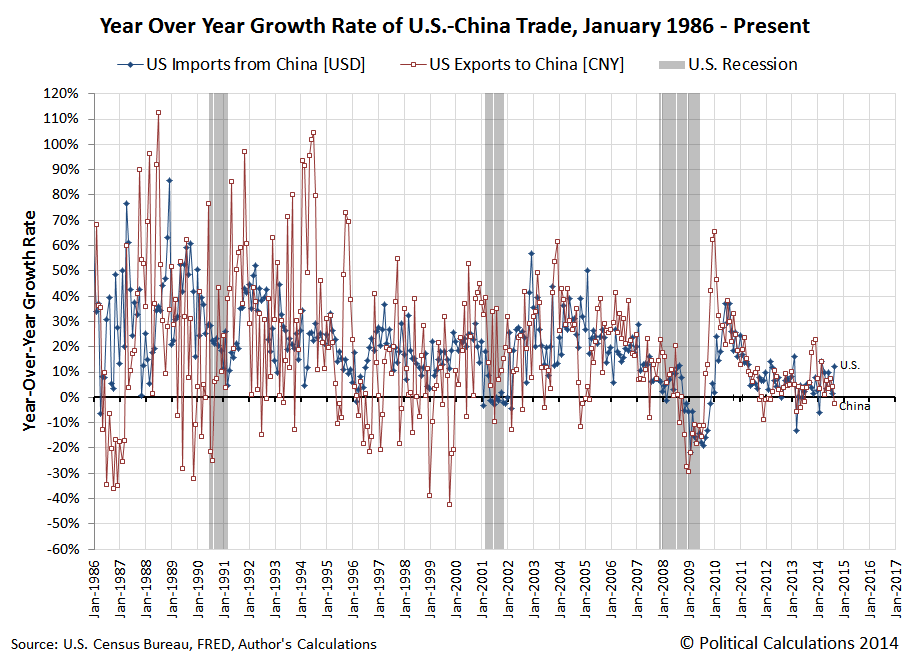 In the chart above, te data for China has been adjusted to account for the exchange rate of its currency with respect to the U.S. dollar, so that the growth rates shown reflect what China's ecoonomy "sees" in terms of its own currency.

Meanwhile, the number of goods that the U.S. imports from China surged in September 2014, suggesting that the U.S. economy is growing much more strongly.

But while we suspect that's mostly true, the increase from the previous month may be something of an anomaly. what makes the September 2014 trade data so interesting is that the most of the year over year increase in the value of goods imported by the U.S. from China can likely be attributed to just two products: the iPhone 6 and the iPhone 6 Plus!

Just one more feature of the iPhone 6: It helped fuel a record U.S. trade gap with China in September.

Imports from the Asian giant hit $44.9 billion, up nearly 13% on the month. Most of the $5 billion increase in imports was fueled by a $3 billion surge in buying of cell phones, a deluge that coincided with Apple’s release of the iPhone 6 and 6 Plus, both of which are assembled in China.

Such is the iPhone economy!

Going back to China's apparently deteriorating economic condition, we anticipate that the year-over-year growth rate data for the rest of 2014 will fall into negative territory on our chart. This is largely due to an abnormally large volume of goods that China imported in October through December 2013, particularly soybeans and other agricultural products, at relatively high prices following the U.S.' then record bumper harvest of these crops.

This year, while the U.S. would appear to once again have reaped a record harvest, the prices for these goods have crashed compared to last year's crops. So even if China demanded the same quantities of these crops as it did a year ago, it would pay far less to acquire them, which in this case, likely means a negative year-over-year growth rate for the goods it imports from the U.S.

But that's not all lurking below the iPhone economy. The really perverse thing in this trade activity is that because the prices of U.S. agricultural goods has fallen so much compared to last year, the U.S. federal government is expected to pay out record levels of price-support corporate welfare subsidies to U.S. farm corporations. The money for which the U.S. government will very likely be borrowing from China, who will be looking to buy up U.S. Treasuries and other assets in order to close the U.S.' current account deficit with China because of the U.S.' iPhone-widened trade deficit.

And hopefully, reviewing these dynamics will help explain why President Obama is so busy kowtowing to China's leaders this week:

Obama, who is visiting China as part of a global summit, attended an event at the residence of Chinese president Xi Jinping Tuesday. According to the pool report, Xi told Obama he wanted to work more closely with the Americans, and the American president agreed.

"When the U.S. and China are able to work together effectively, the whole world benefits," Obama said, adding that he wants to "take the relationship to a new level."

Obama told Xi how "well-managed" the Communist leader's events were during his visit.

When one is in such great debt, one must pay great respect to their lenders, especially when they are seeking to borrow even more. That goes even more so when their previous single biggest lender has closed their checkbook just before some much bigger-than-expected bills arrive. 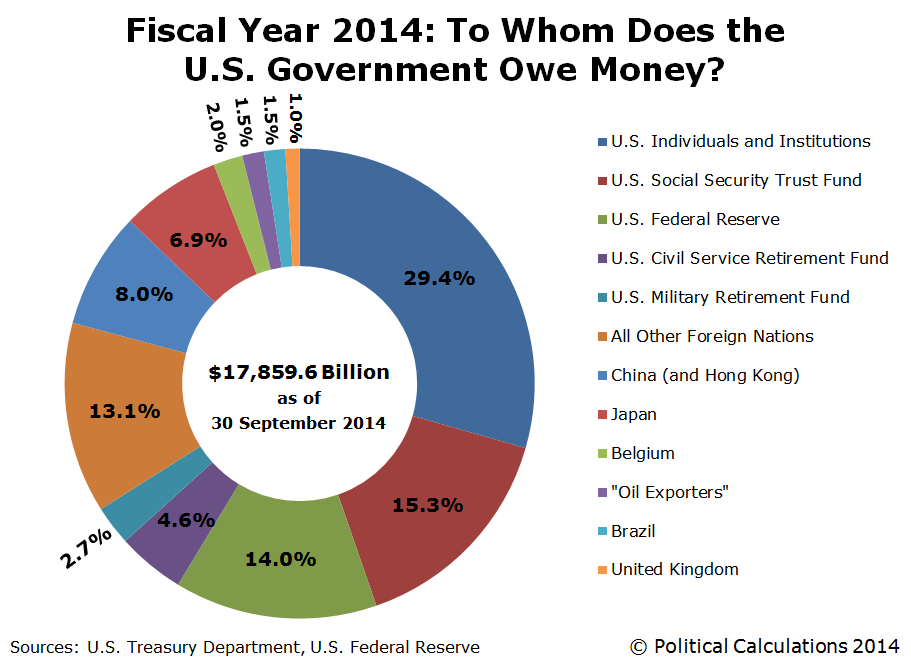 Such is the Obama economy!