For a lot of people, last week's estimate of GDP for the third quarter of 2014 represented what would be the last bit of major economic news that voters would see going into today's midterm elections. That's not true - there's another bit of major economic data that provides an enormous amount of insight into the near-real time health of the private sector of the U.S. economy, which just became available yesterday: the monthly number of public U.S. companies that acted to cut their dividends!

What we find is that for October 2014, the number of U.S. companies who cut their dividends for the month is consistent with recessionary conditions being present in the U.S. economy. 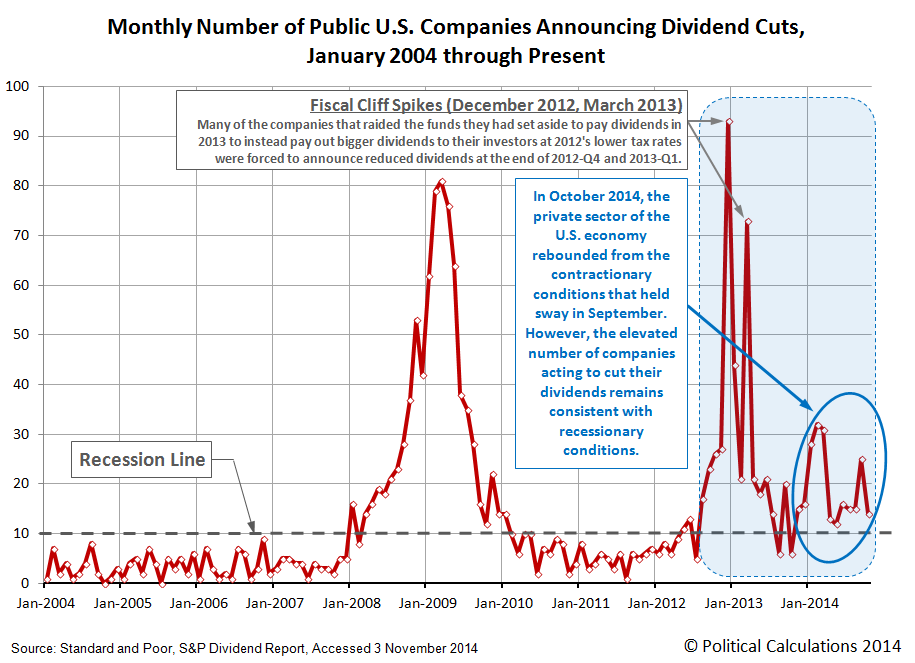 Believe it or not, that represents an improvement over September 2014, where the larger number of dividend cutting companies in that month was consistent with a general contraction of the U.S. economy.

That doesn't necessarily mean that the U.S. economy is now in recession. Rather, that situation is more consistent with a state of what we would describe as a microrecession - where recessionary conditions are too limited in scope, severity or duration to qualify as a full recession as might be defined by the National Bureau of Economic Research, where the pace of officially measured economic growth might best be described as "lackluster, at best".

That's a contributing factor to the subsequent reporting that has taken place since the first estimate of GDP for 2014-Q3 was announced, which suggests that the U.S. economy is not performing as well as the initially reported GDP figure for the quarter would indicate, which itself is increasingly looking like an anomaly that considerably overstates the real growth rate of the U.S. economy.

So there you have it - the most up to date economic information that voters can have about the state of the U.S. economy going into an election!

Update 5 November 2014: It would appear that our near real time economic indicator fully anticipated exit polling responses from U.S. voters!