Something really weird appears to have happened to the U.S. new home market in October 2014.

Here, if we're to believe the preliminary figures reported by the U.S. Census Bureau, both the median sale price and the average sale price of new homes in the United States posted their largest ever recorded month-over-month gains in October 2014.

Meanwhile, in September 2014, the average sale price of a new home in the U.S. was originally reported to be $313,200, which was just revised slightly upward by $1,000 to $314,200. The U.S. Census Bureau then indicates that the average sale price for a new home for October 2014 is $401,100, an all time record month-over-month increase of 27.7%. The chart below, which shows the recorded median and average sale prices of all new homes sold in the U.S. since January 1975 illustrates just how out of place these prices are with respect to all the prices that have been recorded before. 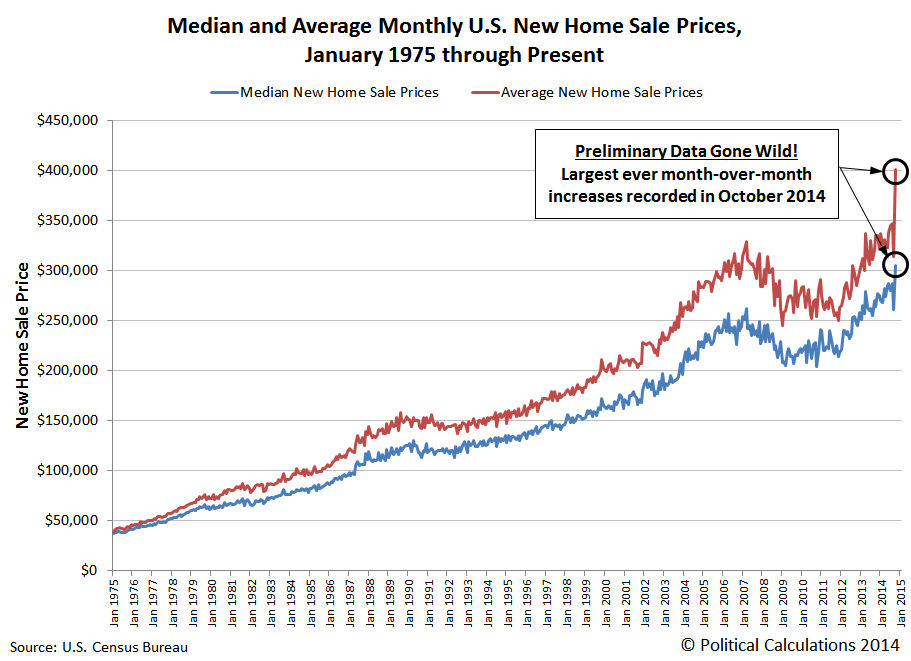 At the same time, the Census Bureau indicates that a seasonally-adjusted number of 455,000 new homes were sold in the United States in September 2014, with a preliminary figure of 458,000 new homes being bought in October 2014, an increase of just 3,000.

For all these numbers to work together, it would mean that after Americans snapped up 455,000 new homes in the U.S. during September 2014, other Americans suddenly rushed out to buy 458,000 more new homes just as they were in the process of recording their largest ever month over month increase in modern history. And that modern history includes the U.S. housing bubble!

That change in the sales mix of the U.S. new home market would confirm that it is not just become skewed, but has become exceptionally distorted. And that change would not be a positive development.