In December 2014, the number of publicly-traded U.S. companies announcing that they would reduce their dividend payments jumped up to 25, a level that we believe is consistent with contractionary distress being present within the U.S. economy. 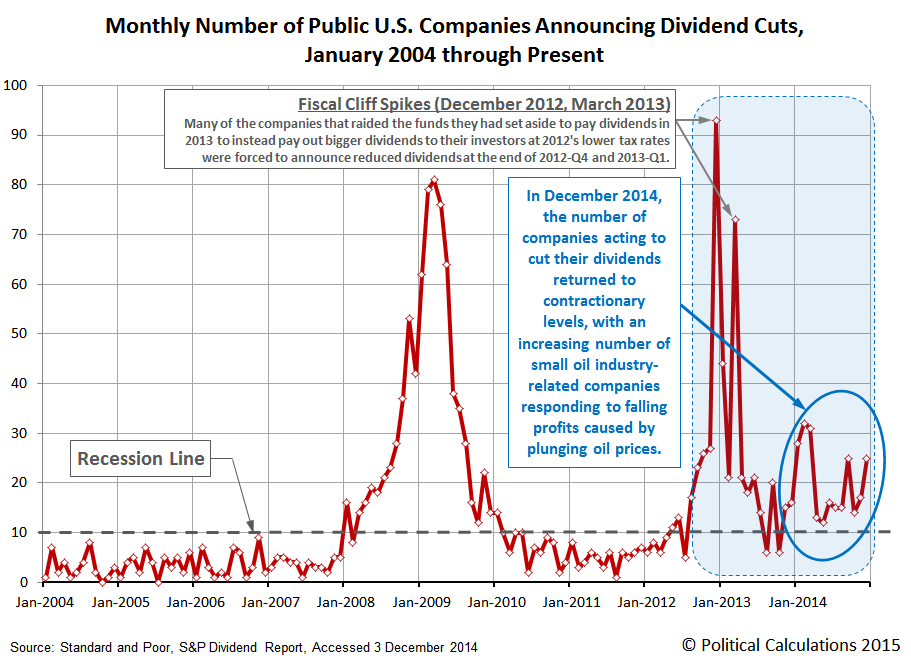 From our observations of the limited data available, having 10 or more companies announce that they are cutting their dividend payments in a single month is sufficient to indicate that there are recessionary conditions in the U.S. economy. When that figure rises above 20 per month, it tends to coincide with some degree of contraction within the U.S. economy, which can impair the nation's GDP.

That's not to say that level of contraction qualifies as a full-bore recession - from all indications, it's more a sign that there is an increased degree of distress within the U.S. economy that is, as yet, too limited in scale, scope or duration to qualify as an official period of recession as might be determined by the National Bureau of Economic Research, which we describe being in a state of microrecession.

While the number of U.S. companies acting to cut their cash dividend payments to investors has been above the recession line for some time, the type of company announcing dividend cuts has begun to expand in recent months. Prior to November 2014, most firms announcing dividend cuts were those that are especially sensitive to rising interest rates, such as real estate investment trusts, which have been on tap ever since the U.S. Federal Reserve confirmed that it would be terminating its most recent quantitative easing programs by the end of 2014.

While many of those types of firms are still announcing dividend cuts, we've observed an increasing number of oil industry-related firms that have begun taking similar actions in response to falling profits, which are being driven by plunging world oil prices and their effect upon business revenues.

At present, it would appear that the fallout is very limited in scope, with just a handful of very small and price-sensitive firms in oil-related industries taking the action of cutting their dividends as their revenue and profit prospects fade. The big questions going into 2015 are: how far will oil prices drop, how long might they stay depressed and will other sectors be able to benefit enough to offset the distress in the oil industry? The answers to these questions will determine the duration and severity of the recessionary forces at work within this sector of the U.S. economy and the stock market as a whole.