While we were away on holiday, we were very lucky to have our final post of 2014, The Biggest Math Story of the Year, go viral.

We're not kidding when we say "very lucky", because in the absence of new posts or other activity on our part that might otherwise have influenced the number of visitors who found our site during the holiday, our site traffic monitor captured the essence of what a genuinely viral post looks like without that other noise. The image below is the screen shot we snapped of our site traffic upon our return. 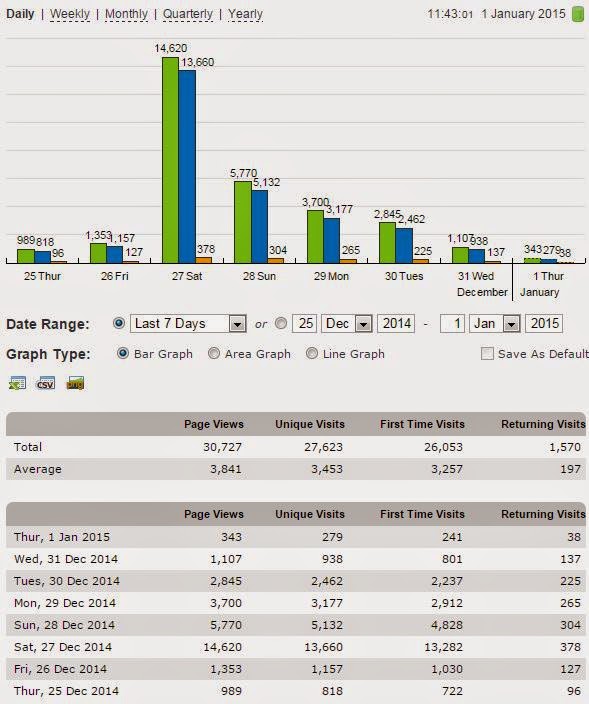 On the whole, it would appear that the site traffic for a post that goes viral looks a lot like it follows a lognormal distribution, the same kind of distribution that can be applied to things like the distribution of income in a nation or the firing rate of neurons in the human brain.

So we're going to start off 2015 the way we ended 2014, on a strong mathematical note referencing some of the more useful papers we've taken advantage of in the past related to lognormal distributions and also their closely related cousins, power laws. If you're looking to expand your mathematical horizons beyond "normal" distributions, these are very good places to begin.

Chen, Yanguang. An allometric scaling relation based on logistic growth of cities. [PDF Document.] Chaos, Solitons and Fractals Volume 65, August 2014, Pages 65–77. - In addition to providing a discussion of the nature of how power laws arise in the geography of cities, Chen describes the math behind those observations, including how to apply sigmoidal, or "S-shaped", distributions to better describe the data that applies to cities, and also discusses how the exponent in a power law is often simply the ratio of two exponential growth rates. Speaking of which, we've previously demonstrated that latter kind of relationship exists between stock prices and dividends per share in a fun mathematical proof.

Limpert, Eckhard, Stahel, Werner and Abbt, Markus. Log-normal Distributions across the Sciences: Keys and Clues. [PDF Document. BioScience Vol 51, No. 5. 341-352. May 2001. - Good discussion of the various places where lognormal distributions are found in real-life, practical applications.

Mitzenmacher, Michael. A Brief History of Generative Models for Power Law and Lognormal Distributions. [PDF Document.] Internet Mathematics Vol. I, No. 2: 226-251. - Discussion of the similarities between how both power laws and lognormal distributions may be generated.

Newman, M.E.J. Power laws, Pareto distributions and Zipf's law. [PDF Document.] Contemporary Physics 46, 323-351. 2005. - We couldn't include a pointer to an article describing where lognormal distributions might be found without also including a solid discussion of where power laws may be found to apply!