Not long ago, in an e-mail exchange with an individual who accused us of being "likely in the the top 5-10%" (which we are, definitely, wink, wink, nudge, nudge, say no more!), and therefore of being "clearly unable to understand the lives or plight of the lower 50%", into which group they placed themselves (hey - they're the ones who self-identified!) They also accused us of being "someone from the conservative side of the political spectrum".

Today, we're going to clear up exactly where we fall on the political spectrum. Via John Whitehead, we've taken "The World's Smallest Political Quiz". Here is a screen shot of our first-time-ever results: 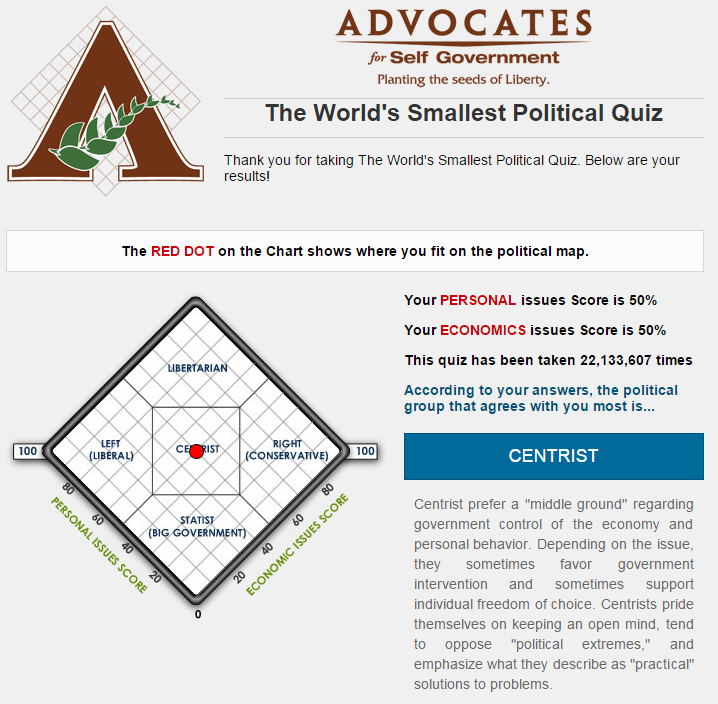 We played around with the quiz, tweaking some of our answers slightly to account for some of the inherent vagueness in how to interpret the various options for each of the questions asked, but only managed to move the dot marking our location in the political spectrum one square to the left or one square up from our natural positions on the issues presented, when we managed to move it at all.

(Meanwhile, John Whitehead, tie-dye wearing hippie - at least, as compared to us - reports that one can achieve a 100% libertarian status in the quiz by agreeing with each proposition.)

Still, we appreciate that many of our readers might think that we fall much further to the right in the political spectrum. We suspect that impression has a great deal to do with our approach to the positions we take on the topics we cover, where we have two overriding principles:

This combination of principles largely accounts for our negative assessment of President Obama's tenure in office and his preferred policies, which many of the President's most ardent and not uncoincidentally unthinking supporters perceive as meaning that we're very much on the right of the political spectrum. Instead, the truth is that we're right in the center, the only place where people can be truly fair and objective.

We suspect that is perhaps what really upsets such mindlessly hate-filled and jealous people so greatly, because that combination of principles gives us the super power of being able to accurately see the world as it is, which makes it possible for us to be right so much more often than such negatively-affected extremists can ever hope to be.

But then, maybe that's just our perspective from actually being in the center of the political spectrum. We just don't see the point of spending any part of life in such an inadequacy-driven rage, because the data says that's no way to live.