Supporters of the Patient Protection and Affordable Care Act, which is popularly known as "Obamacare" and is often abbreviated as "ACA", have claimed that the law is responsible for bending the cost curve of expected future health care spending down from its previous trajectory. 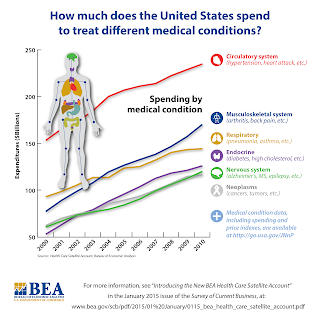 Is that really true?

As it happens, things like the changing age distribution of a nation's population would be a known factor - that knowledge would influence the expectations for future health care expenditures, so we can exclude that possibility from consideration.

Meanwhile, advances in health care technology and treatments is well understood as a long and difficult process, one that would not produce a sudden deviation in the trajectory of health care spending over time, but one that would instead produce incremental changes as time goes by.

By contrast, if changes in economic growth rates are a major factor in how health care spending per capita evolves over time, we should see that impact as a sudden change in trajectory. Likewise, we would see a similar shift in trajectory for an event-driven change, which if Obamacare did indeed bend the cost curve for the U.S., is how we should expect to see its impact.

To find out which scenario might apply, we tapped the OECD's online database that reports the amount of health expenditures per capita for the nation's that belong to the organization and provide this data to it. To account for differences in the nation's various exchange rates and the relative purchasing power of their currencies, we accessed each member nation's health care spending per capita in terms of U.S. dollars after adjusting those expenditures for each nation's relative purchasing power parity (PPP).

We next calculated the percentage change for each OECD nation in its PPP-adjusted health care spending since 2000, and then filtered those results to focus upon those nations whose economies experienced significant economic recessions in the period from 2007 onward.

The reason why we've taken this approach is to determine the extent to which a nation that experienced a significant period of economic contraction might alter the trajectory of its health care spending per capita, which would allow us to isolate a change in economic growth rate as a significant factor in influencing the trajectory of a nation's health care expenditures per capita.

Our results are graphically presented in the following chart: 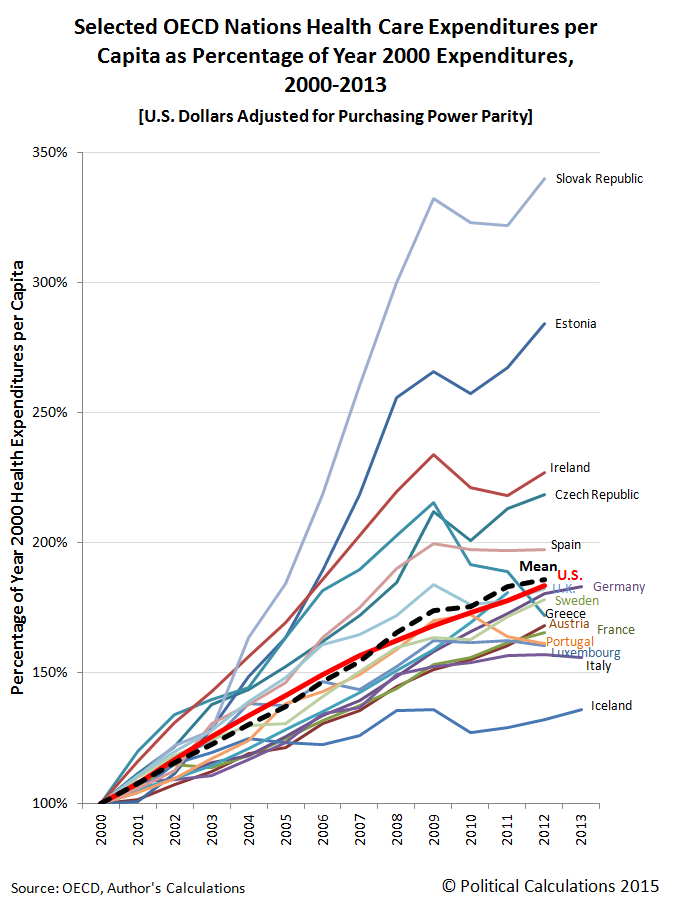 Examining the data visually presented in the chart above, we find that each of the indicated nations that experienced major recessions in the period from 2007 onward has also experienced a significant deviation in the trajectory of their PPP-adjusted health care spending per capita, the degree of deviation coinciding with the duration and severity of their respective periods of recession. 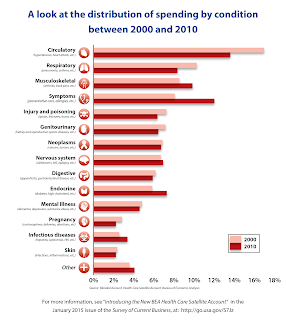 Meanwhile, the general absence of small, incremental changes among all these nations would indicate that advancements in health care technologies and treatments that might reduce the cost of health care have not been a significant factor shaping the trajectory of health care spending per capita.

Focusing at just the U.S., we observe that the trajectory for U.S. health care spending per capita bends slightly downward after 2007, coinciding with the recession in the U.S., and not in or after 2010, which is when the Affordable Care Act became law, as the shift in trajectory was established well before that time.

Meanwhile, in comparing the other OECD nations experiencing recessions during this period, we see that each has seen a significant changes in the trajectory of their PPP-adjusted health care spending per capita. Changes that are far more significant for most nations than those that occurred in the United States, as the U.S. recession was much milder in comparison.

What that outcome reveals is that economic growth is a much more significant factor in determining the trajectory of the cost curve for a nation's health care spending per capita - one that far exceeds and dwarfs any contribution that the Affordable Care Act has had after it became law in 2010.

It would then be much more accurate to say that the trajectory of health care spending in the U.S. after 2007 has much more to do with the recession and the atypically slow economic recovery the nation has experienced in the years than any aspect of the passage of the Affordable Care Act or its implementation since 2010.

We therefore reject the claim that the bending of the cost curve for health care expenditures per capita in the United States may be attributed to the passage and implementation of the Patient Protection and Affordable Care Act in any meaningful way. Given what we observe in other nations, where Obamacare was not implemented, it is clear that recession and enduring anemic economic growth are a much more convincing explanation that explains the downward bending of the cost curve for health care spending that we actually observe over time.

On a final note, we've excerpted some infographics on health care spending from the Bureau of Economic Analysis, which identify the trends in health care spending for a variety of conditions before the passage of the Affordable Care Act in 2010 could have had any meaningful effect, which not only demonstrate our point, but are cool to look at!