Political Calculations
Unexpectedly Intriguing!
18 May 2015
The Best Week of 2015 So Far

You wouldn't necessarily think of it from the news reports, but according to the number of U.S. companies announcing that they would be cutting their dividends, the last week was the best week of 2015! 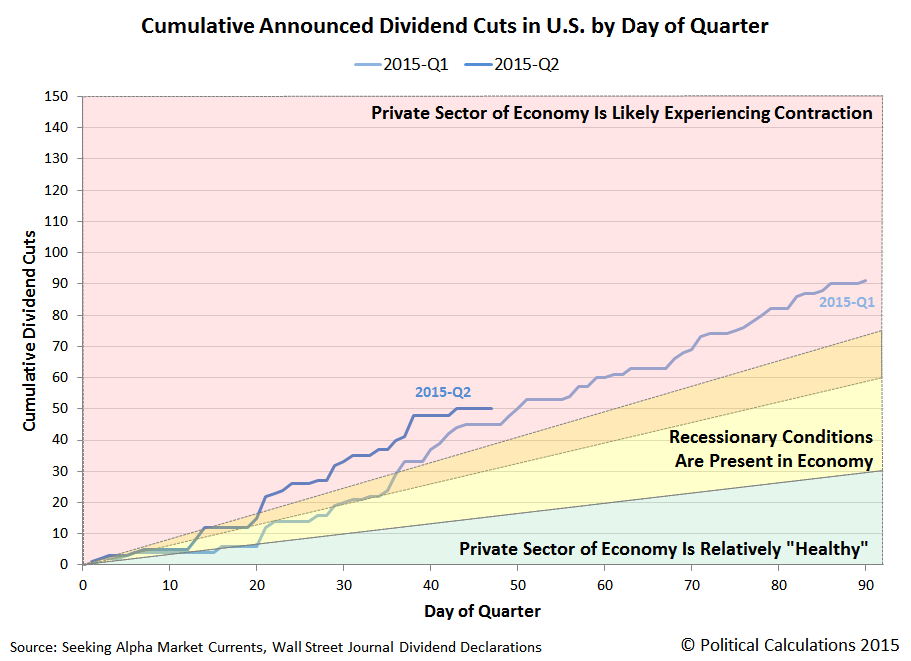 Although the total level of U.S. companies cutting their dividends in 2015-Q2 remains ahead of the pace established in 2015-Q1, a quarter that "some economists" have finally caught up to us in predicting that the U.S. economy shrank during, the past week has been surprisingly quiet.

For U.S. stock prices, investors would still appear to be focused on the expectations associated with the current quarter of 2015-Q2 in setting today's stock prices, as the Federal Reserve has not yet clearly defined its intentions with respect to the timing of future short term interest rate hikes. 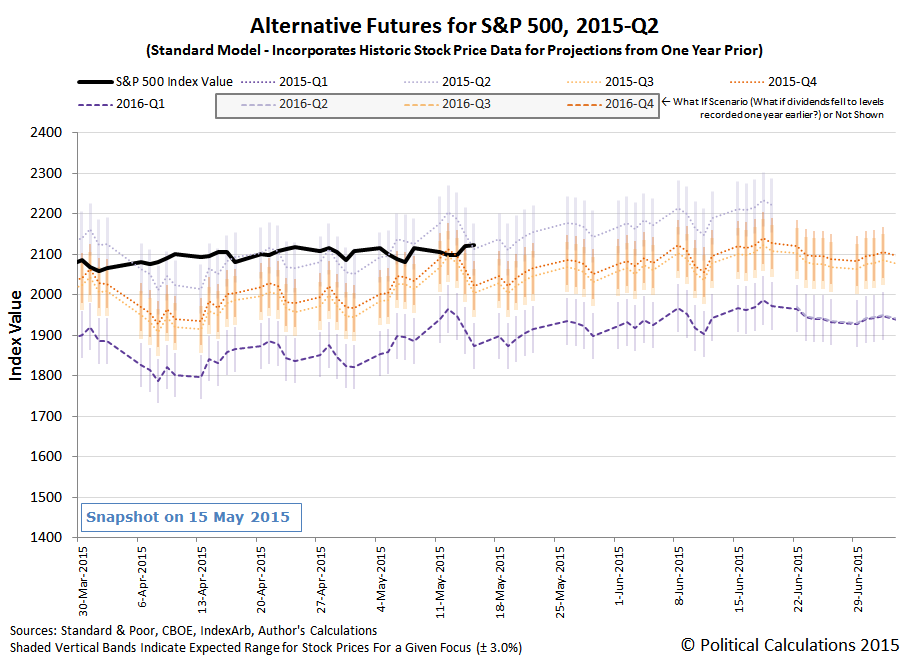 We'll therefore repeat our observations from 27 April 2015, striking out the bits that would no longer apply and emphasizing the bits that came true:

At present, given the current expectations for future dividends, U.S. investors would appear to be focused on 2015-Q2 in setting current day stock prices. As long as their focus continues to fall on this current quarter, as they await greater clarity from the U.S. Federal Reserve this week with respect to its plans to hike short term interest rates in the U.S., stock prices may continue following their largely sideways to slightly upward trajectory while that uncertainty continues, assuming no major changes in the expectations for future dividends.

However, if they shift their focus to a different point of time in the future, there is a high potential for stock prices to fall, the degree to which will depend upon which future point of time they might choose to focus their forward looking expectations upon and the timing of when such a shift in focus would occur.

Noting that the upward spike in our alternative future trajectories for the S&P 500 for the week beginning 11 May 2015 is really an artifact of our using historical stock prices in our forecasting model, making that bump something of an echo of a past event, investors would still appear to be focused closely on 2015-Q2 as they would appear to be awaiting more effective guidance from the Fed regarding its intentions.

Meanwhile, investors are running out of 2015-Q2 to focus their forward-looking attention upon, which means that a shift in that focus to another point of time in the future is becoming imminent. For the quarters for which we have data indicating future expectations, the most positive outcome would be for investors to shift their focus to 2015-Q4, which would mean that "mostly sideways" would be the outcome of the best case scenario for stock prices through the end of the current quarter, absent significant changes in future expectations.