How important is farming to the economy of each of the United States?

Our latest data visualization exercise answers that question by calculating the percentage share of farming with respect to the GDP recorded for each individual state and the U.S. as a whole by the U.S. Bureau of Economic Analysis for 2013, the most recent year for which details for the economic output of each state's agriculture industry is available at this writing! 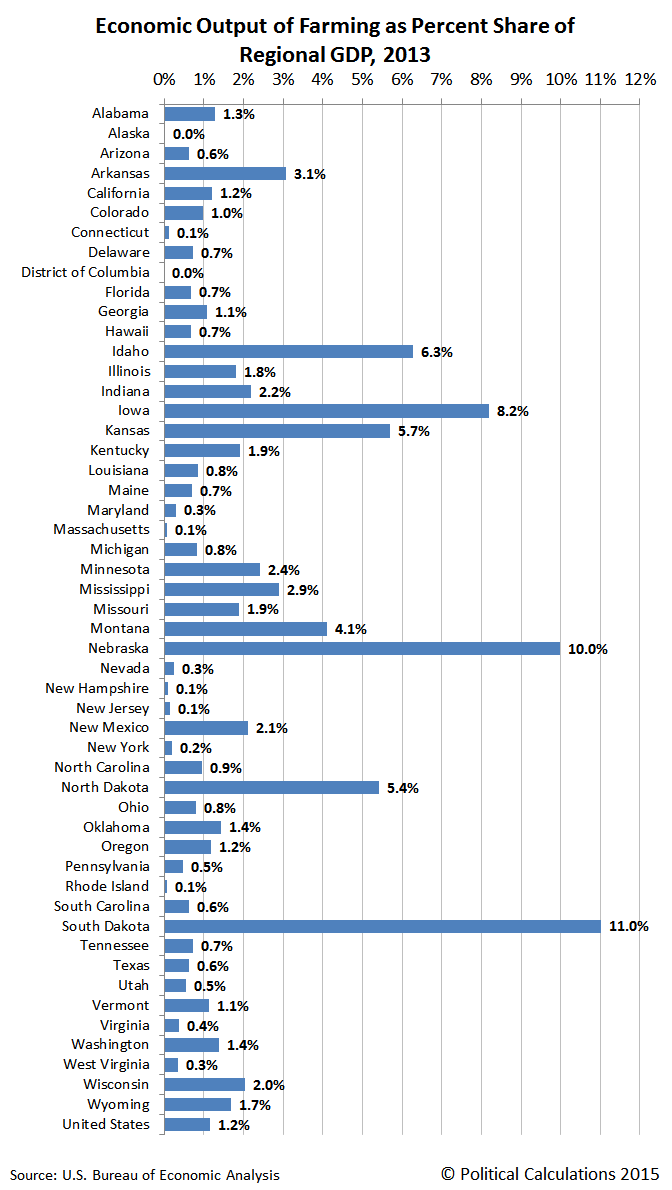 The chart above represents a single snapshot in time, in this case, reflecting the economic output of U.S. farms during the entire 2013 calendar year. As such, it doesn't tell the story of how the farms in each indicated region achieved its particular share in the accounting for that region's economy.

For instance, are those figures presented in the chart above farming's "normal" share of GDP for each of the states? Could the figures for individual states be inflated by 2013 having been a bumper year for farm goods produced within their borders? Or are they understated because 2013 was a bad year for farmers?

Nor can the values tell us anything about the nature of the farming industry in each region. For example, the percentage share of farming output in the three states of Vermont (1.1%), Georgia (1.1%) and California (1.2%) are all within a tenth of a percent of the value of each state's total GDP with respect to each other, but farming in each of these states is very different from each other. They have different crops, different weather, different seasons, different geography, different infrastructure, et cetera.

If we don't know any of these things, valid conclusions about an individual state's farm industry cannot be made from the data that has been presented. In the absence of such relevant context, the chart above becomes little more than a defacto ranking system, which is nice if one thinks substantive analysis is a Top Ten List, but which really doesn't provide much substance from which any valid conclusions about a given topic may be drawn at all.