How different would the value of the S&P 500 be if not for the amount of stock buybacks that have taken place in the U.S. stock market since the end of 2008?

We're asking that question today because of the recent suggestion that "Wall Street's new drug is the stock buyback":

In the first quarter of 2015, companies in the S&P 500 index returned more money to shareholders than they earned. The last time that happened was in the fourth quarter of 2008, when the entire S&P 500 reported a slight loss for the quarter but still spent $110 billion on dividends and buybacks.

“This is not a normal trend,” said Howard Silverblatt, senior index analyst at S&P Dow Jones Indices. “This is a large amount of money being returned with the majority of it in buybacks.”

In the first quarter, S&P 500 companies spent $237.69 billion on dividends and buybacks, while reporting operating earnings of $228.36 billion, according to data compiled by Silverblatt.

To approximate what that change means in terms of the value of the S&P 500 index, we're going to treat the S&P 500 index as if it were a single company, which means that we will not be accounting for the market cap-based weighting of the buybacks that a number of the index' component firms have executed since the end of 2008.

Our last step was to take each quarter's reported market capitalization and to divide it by the number of equivalent shares from our hypothetical "no stock buyback" parallel universe to calculate what the value of the S&P 500 index would be in that alternate reality. Our results are visualized in the following chart. 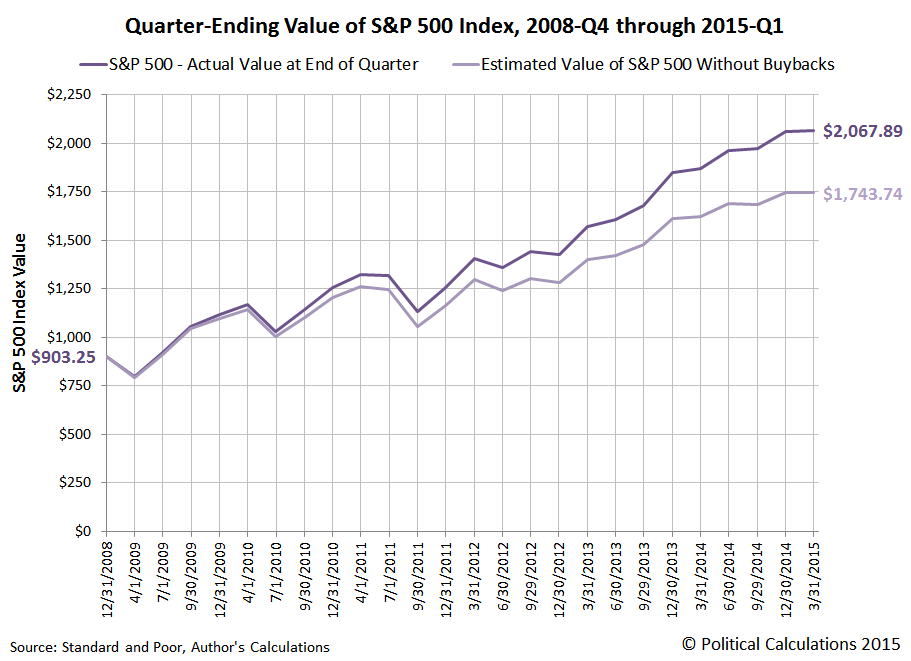 What we see from our highly simplified, back-of-the-envelope math is that through the end of the first quarter of 2015, the most recent for which S&P has reported data at this writing, the value of the S&P 500 would be about 324 points, or nearly 16%, lower if not for the progressive impact of share buybacks over the last seven years.

The actual impact of share buybacks over this period of time though would be less than that amount, because what we would really want to calculate is the impact of "surplus" share buybacks, which would be the difference between the number of share buybacks that have occurred with the number that would otherwise have occurred under "normal" economic and market conditions. And over the last several years, those conditions have been anything but normal, especially given what has been described as an "interesting coincidence" in how many companies came to have the cash needed to execute their share buyback plans in recent years.

Part of the reason for that cash hoard has been QE and near-zero interest rates, which have made it more attractive to take on debt to help fund share repurchases.

While there is no direct relationship between the two, the price tags on QE and buybacks offer an interesting coincidence: S&P 500 companies have spent about $2.41 trillion on buybacks over the course of the current bull market, according to S&P data, compared with a $2.37 trillion rise in the Fed’s balance sheet since the start of QE.

What does that mean for the market going forward? We'll let a JPMorgan analyst's comments from May 2013 (via ZeroHedge) explain:

"The other side effect of elevated dividends and share buybacks is that these distributions to shareholders may reduce the long term potential of the company to grow relative to the alternative of capital spending."

Two years later, that dynamic would be a major reason why the upward growth of the S&P 500 has largely stalled out through the first seven months of 2015, which through Friday, 24 July 2015, is less than 1% higher than it was at the end of 2014. It likely took longer than they expected, but scenario described by JPMorgan's analyst arrived all the same.

Update 28 July 2015: Readers should be aware that there are inherent flaws in treating the S&P 500 index as if it were a single company, where the analysis we presented above would only be applicable if it were. We'll have additional discussion on that topic sometime next week, but if you want a primer, see S&P's discussion of the math behind the index!