Political Calculations
Unexpectedly Intriguing!
03 August 2015
The Dragons Beyond the Edge of the Map and the S&P 500

Last week, we considered what the potential impact of stock buybacks would be to the S&P 500 as if the venerable stock market index was the stock price of a single company. We concluded our analysis as follows:

What does that mean for the market going forward? We'll let a JPMorgan analyst's comments from May 2013 (via ZeroHedge) explain:

"The other side effect of elevated dividends and share buybacks is that these distributions to shareholders may reduce the long term potential of the company to grow relative to the alternative of capital spending."

Two years later, that dynamic would be a major reason why the upward growth of the S&P 500 has largely stalled out through the first seven months of 2015, which through Friday, 24 July 2015, is less than 1% higher than it was at the end of 2014. It likely took longer than they expected, but scenario described by JPMorgan's analyst arrived all the same.

But not for the reasons they believe.

To understand why, you have to appreciate the central fallacy we built into our "what if" analysis, which involved treating the value of the S&P 500 index as if it were the share price of a single company. To understand why that's wrong requires a brief review of S&P's U.S. Indices Methodology:

On any given day, the index value is the quotient of the total float-adjusted market capitalization of the index’s constituents and its divisor. Continuity in index values is maintained by adjusting the divisor for all changes in the constituents’ share capital after the base date. This includes additions and deletions to the index, rights issues, share buybacks and issuances, and spin-offs. The divisor’s time series is, in effect, a chronological summary of all changes affecting the base capital of the index. The divisor is adjusted such that the index value at an instant just prior to a change in base capital equals the index value at an instant immediately following that change.

Because of those adjustments, it is not correct to apply the same math as would apply to the stock price of a single company as we did in our "what if" analysis, as the value of the index is continually adjusted to account for the effect of share buybacks on each component stock's market capitalization weighting as they occur. [The math that's used is explained in this PDF Document.]

So if you're an investor looking to the S&P 500 index to capitalize on share buybacks, you're investing in the wrong place. To that end, S&P also maintains an equal-weighted share buyback index that might be more suited to you, which the Financial Lexicon has ably described.

As for the real reason the S&P 500 is stalling out, you don't need to look any further than the lack of adequate momentum for growing the index' future dividends (or rather, the sustainable portion of earnings that are likely to be realized in the future), whose upward growth has been likewise stalling out. Speaking of which, let's take a look at what our rebaselined model is projecting for the future trajectory of the S&P 500 through 2015-Q3, as our standard model reached the edge of its map of the future: 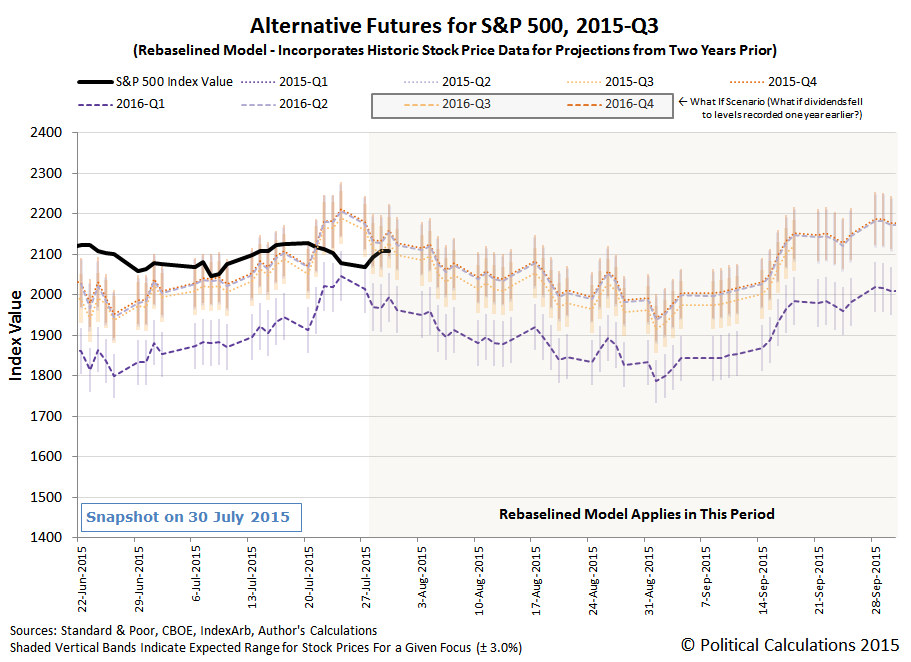 We confirm that through 30 July 2015, investors remained closely focused on the third quarter of 2015, where the expectations associated with the quarter, which ends in September, driving their investment decisions. The "2015 Greek Bailout" minor speculation bubble that had prompted the S&P 500 to run hot two weeks ago has fully dissipated.

So at least the dragons that be on this side of the map's edge are familiar ones!