In our last installment in our national dividend series, we were striving to turn our work in developing a consumption-based national dividend concept for measuring the economic well-being of typical Americans into a monthly economic indicator.

It turns out however that our source for the monthly number of U.S. households recorded in the U.S., which we use to approximate the number of "consumer units" in the U.S., is only updated quarterly by the U.S. Census Bureau. So, even though we can calculate the national dividend for the U.S. economy for each month, we only update our calculations once a quarter.

The chart below reveals what we found for each month in the recently-ended second quarter of 2015: 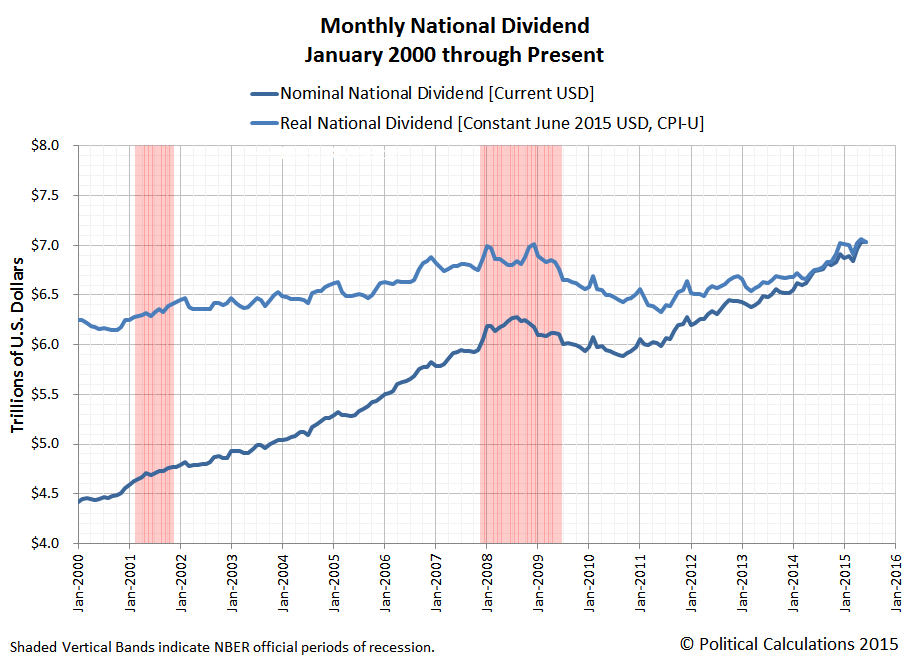 Those results contrast with those of the first quarter of 2015, which saw the national dividend decline from the values recorded at the end of the fourth quarter of 2014 in each month of the quarter.

So on the whole, our national dividend measurement indicates that the U.S. economy, as experienced by typical Americans, expanded in the second quarter of 2015. Digging into the underlying numbers for our national dividend calculation, 63% of the increase during the second quarter is attributable to an increase in the number of U.S. "consumer units", with the remainder being attributable to an increase in their income-fueled consumption.

Once upon a time, earlier this year, we solved a problem that had stymied economists since 1906. And we made it look easy!