Each summer, American farmers harvest millions of bushels of wheat. But those bushels don't head straight to the market for sale - the wheat is first processed, transforming it from an agricultural product into the non-durable goods that consumers can actually buy at the markets where they shop.

Two years ago, Katie Taube of KSN-TV told the story of how wheat goes from field to flour.

WICHITA, Kansas — Now that the Kansas wheat harvest is over, much of that grain is going to Horizon Mill in Wichita for flour production.

“Sometimes if it’s really busy we can do anywhere from 90 trucks a day,” says truck dump operator, Charlene Johnson.

How much wheat is that really? After describing what the mill does to transform the wheat into consumable flour, Taube details what they do to move the pure flour they've milled onto the next stage of its journey to become the products you buy in your local grocery store.

The pure flour then fills two 50,000 pound holding tanks before getting loaded onto trucks.

“It takes about 20 minutes from when I start a load to go through everything and get loaded in the truck,” says bulk loader Jason Clark.

The trucks are regulated for cleanliness.

At up to 90 trucks per day, that works out to be 81,900 bushels of wheat arriving daily which, if it could all be milled in one day before being shipped out to its next stage of production, would add up to 3.44 million pounds of wheat per day, which would take 69 trucks to deliver.

Considering a different metric, since a 5 pound bag of flour is a pretty standard size U.S. consumers can buy at a typical grocery store, at that peak production rate, that's the equivalent of 687,960 bags of flour.

But a large portion of the wheat that arrives daily during harvest season is stored, where it is milled into flour at other times of the year to better match the demand of consumers for wheat flour. Even so, it's still an enormous daily operation that impresses the people who work at milling bushels of wheat into flour with its scale and scope.

Even people who’ve worked at Horizon Mill for more than a decade still appreciate the process that feeds people across the world.

“To see the wheat and everything it’s just neat and how they make it, it’s nice yeah,” says Charlene.

The Horizon Mill plant in Newton packages smaller quantities of flour, like the sacks of Wal-Mart brand flour you see at the store.

More than two-million pounds of flour are produced every single day at Horizon Mill. 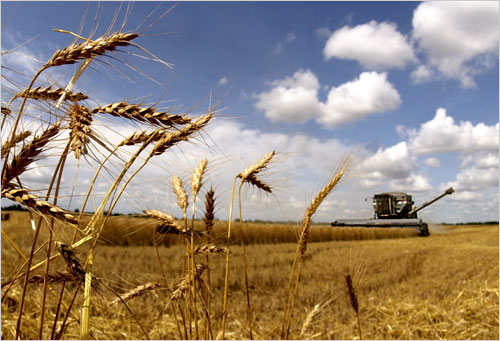