Political Calculations
Unexpectedly Intriguing!
28 September 2015
The Week That Was as Expected for the S&P 500

For the S&P 500, the week ending 25 September 2015 went pretty much as well expected, as the index' value remained well within the range we indicated it most likely be a week ago. 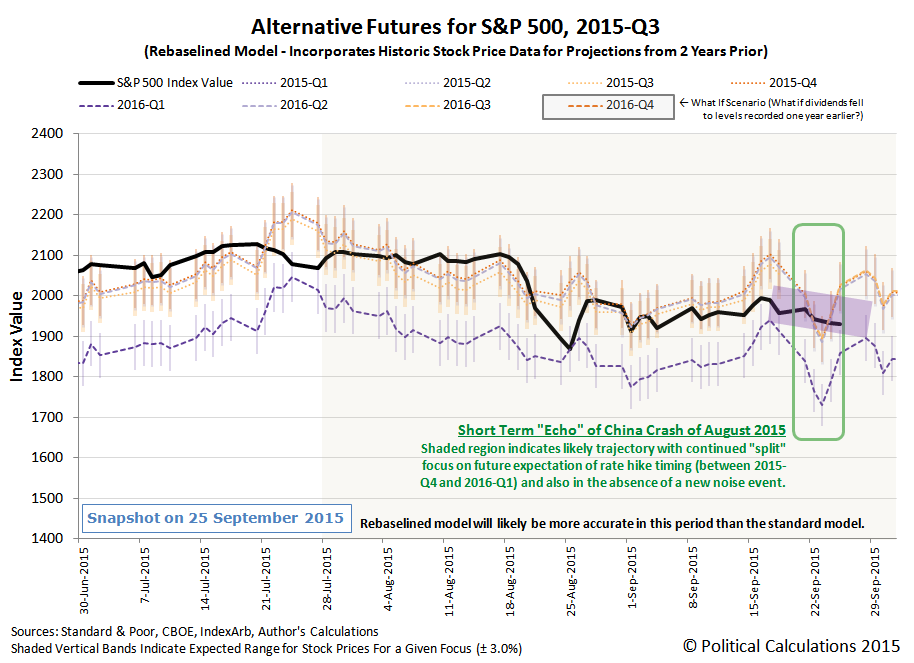 Really, the most interesting day of the week was Friday, 25 September 2015, when stock prices opened the day up thanks to Janet Yellen's speech the evening before, in which she indicated that the Fed would seek to raise interest rates before the end of 2015-Q4.

But then, something overrode that expectation after 2:08 PM that day, and the S&P actually closed lower for the fourth consecutive day, as whatever was plaguing health insurers and pharmaceutical companies throughout the day caught up to the bigger market-cap players in those industries.

Speaking of which, four consecutive down days is something that the market has only a 1.3% (or a 1 in 73) chance of doing.

And while the range we indicated left plenty of room for the market to have one or more up days, our model suggests things should be a little bit better through the end of the month. At least in the absence of a significant change in the expected future dividends that are the fundamental driver of stock prices or an outburst of market moving noise, where the worst outcome would be news that drove investors to focus upon 2016-Q1 for whatever reason.

Most likely, unless new information resolves the current split in the forward-looking focus of investors, the actual trajectory of stock prices will fall somewhere between the trajectories indicated for a strong focus on either 2015-Q4 or 2016-Q1. Janet Yellen tried her best, but alas, fell short.

And with that, we won't be discussing the S&P 500's actual trajectory during the next couple of weeks, as we'll be jumping ahead in time to check back in with the index after 2015-Q4's earnings season is officially underway, and also because we already have.

Tenses are difficult, aren't they?