So far in this fourth quarter of 2015, the pace of dividend cuts being announced by U.S. firms is consistent would appear to be consistent with what we observed in the first and third quarters of 2015. Which unfortunately is to say that the recessionary conditions in the U.S. economy that have been contributing to reduced economic growth throughout the year to date are persisting.

Our chart showing the cumulative number of announced dividend cuts by U.S. firms by day of quarter confirms that through the first 23 days of 2015-Q4, the private sector of the U.S. economy would not appear to be behaving any different than it did in 2015-Q1 or 2015-Q3. 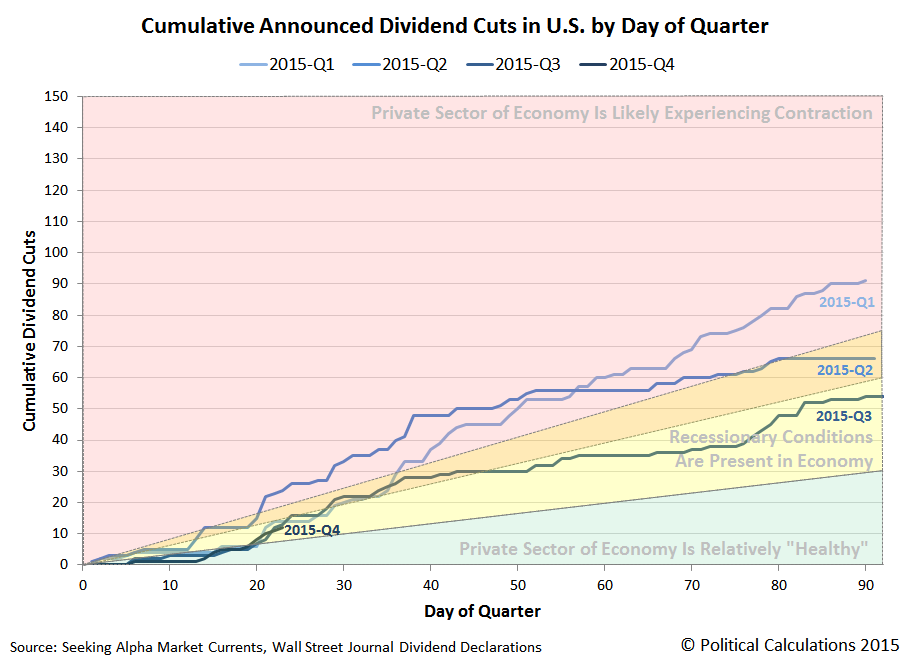 It is however performing better than 2015-Q2 through the same point of time in that quarter, which was initially drug down by the adverse conditions that were recorded in 2015-Q1 before it registered improvement.

Looking at the sampling of firms that we are able to obtain from our two real time reporting data sources, we once again are seeing the pattern where the most distress being felt in the U.S. economy is being felt in the oil, mining and finance industries, which have all been affected by the changes in the price of crude oil that have been taking place.

Here, after crude oil prices began falling near the beginning of 2014-Q3 when Saudi Arabia initiated a price war in an attempt to derail both the Saudi's geopolitical competition and U.S. shale oil producers, the pace of dividend cuts in the U.S. has largely followed the trajectory of crude oil prices - rising when prices have fallen and falling whenever prices have rebounded. Through 23 October 2015, those prices have once again resumed falling.

For the U.S. economy, the negative impact upon the U.S. oil industry has largely been concentrated within eight states, whose economies all feature significant oil production from high cost extraction operations, which low oil prices make less economically feasible. We'll take a closer look at the developing recessionary conditions within those states in an upcoming post.

For the U.S. economy as a whole however, those conditions are consistent with our definition of a microrecession, where negative economic forces are too limited in either scale, scope or severity to qualify as a full recession as might be officially determined by the National Bureau of Economic Research.