Political Calculations
Unexpectedly Intriguing!
03 November 2015
Dividends: Where the Distress Is in the U.S. Economy

Following up our post from 2 November 2015, in which we noted that the number of U.S. firms announcing dividend cuts had crossed into contractionary territory where the relative health of the U.S. economy is concerned, we'll look next at Standard and Poor's count of the number of dividend cutting firms for the month of October 2015, in the context of all the data they've reported monthly since January 2004. 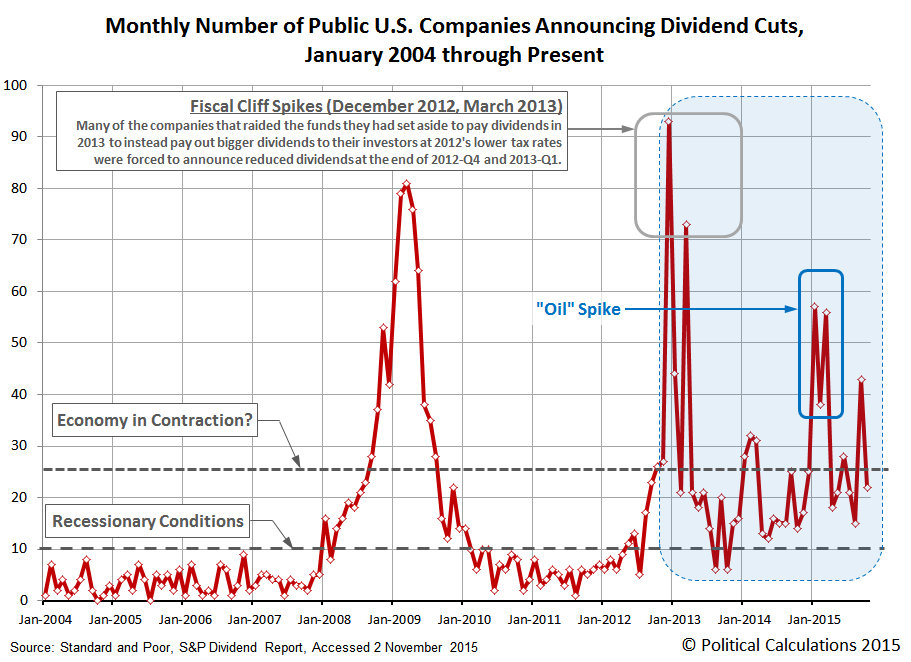 The last time that the U.S. stock market had fewer than 10 firms announcing dividend cuts in a single month, a level that we've previously observed seems to mark the threshold between a healthy and growing U.S. economy and an economy experiencing recessionary conditions, was two years ago, in October 2013. Since that time, it appears that the general trend has been one that suggests a growing level of economic distress.

In October 2015, S&P counted 22 U.S. firms that announced dividend cuts. Using our two alternate sources for reported dividend cut announcements, Seeking Alpha's Market Currents (filtered for dividends) and the WSJ's Dividend Declarations database, we came up with a total of 25, after excluding investment funds that were likely negatively impacted by their holdings of the stocks of companies that actually did cut their dividends (symbols ASG and APO). After accounting for these firms, we're within one of the total reported by S&P.

Our tally is presented in the table below (click here to access the table as it appears properly formatted on our site). We find that oil and mining firms are the most heavily represented, followed by financial firms. Follow the links in the table to the original reports of the indicated firm's dividend cut announcement.

Based on these observations, we find that the highest level of economic distress currently in the U.S. economy is concentrated in its oil and mining sectors.