After a quiet, Thanksgiving holiday-shortened week, the S&P 500 is almost exactly where investors who might have taken the entire last week off left it. 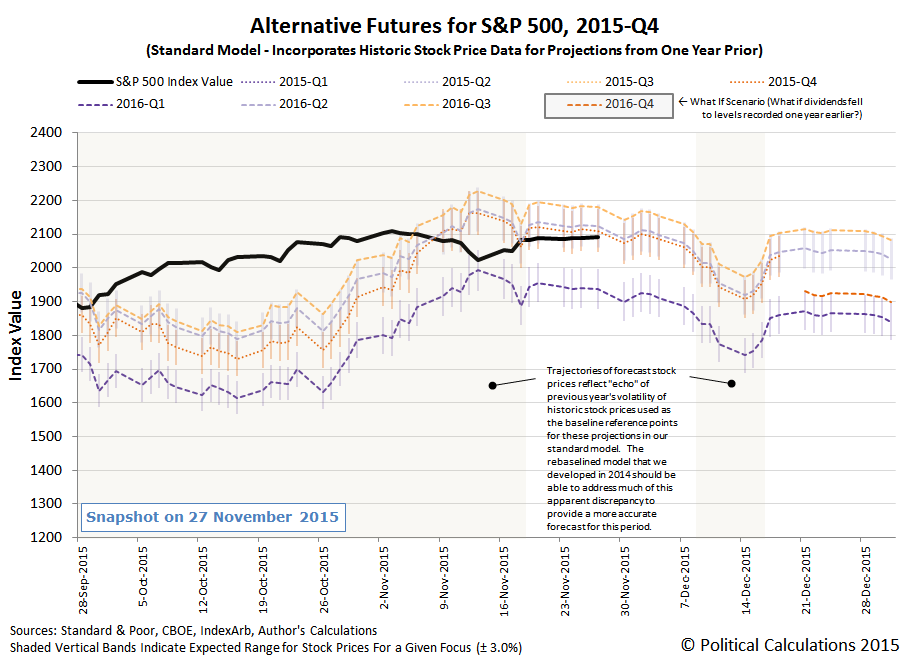 Which is to say that after having shifted their forward looking focus from 2016-Q1 back to 2015-Q4, investors remained focused on the end of the current quarter, as the U.S. Federal Reserve has once again set the expectation that it will finally announce that it will actually begin hiking short term interest rates in the U.S. at its final Open Market Committee meeting of 2015.

Being focused on the end of the current quarter comes with a catch however, as the clock for 2015-Q4 is counting down. Investors will be forced to shift their forward-looking attention to a more distant point of time in the future no later than 18 December 2015, the third Friday in December, which corresponds to the timing of when the the dividend futures contracts for 2015-Q4 will expire.

And technically, they don't need to wait that long. If what they're waiting for is the FOMC meeting, that will have concluded on Wednesday, 16 December 2015.

The real question for investors looking to take advantage of the ticking clock is which future quarter will investors next focus their attention? If investors were to focus upon 2016-Q2 or 2016-Q3, then stock prices wouldn't change very dramatically from where they are at today.

But if investors were to shift their forward-looking focus to 2016-Q1, as they did in August 2015 and just recently in November 2015, then stock prices would be set to fall rather noticeably.

Yet to be determined is the future associated with 2016-Q4, where we won't have data regarding the expectations for dividends per share for that distant future until the fourth week of December 2015.

So the question today for investors is, knowing what you now know, how would you play the S&P 500's countdown clock?