According to Standard & Poor's Monthly Dividend Action Report [Excel Spreadsheet], the relative health of the private sector of the U.S. economy declined in November 2015, as the number of U.S. companies acting to cut their dividends during the month rose to 35 - a level that is consistent with previous periods of time in which the U.S. economy experienced outright contraction. 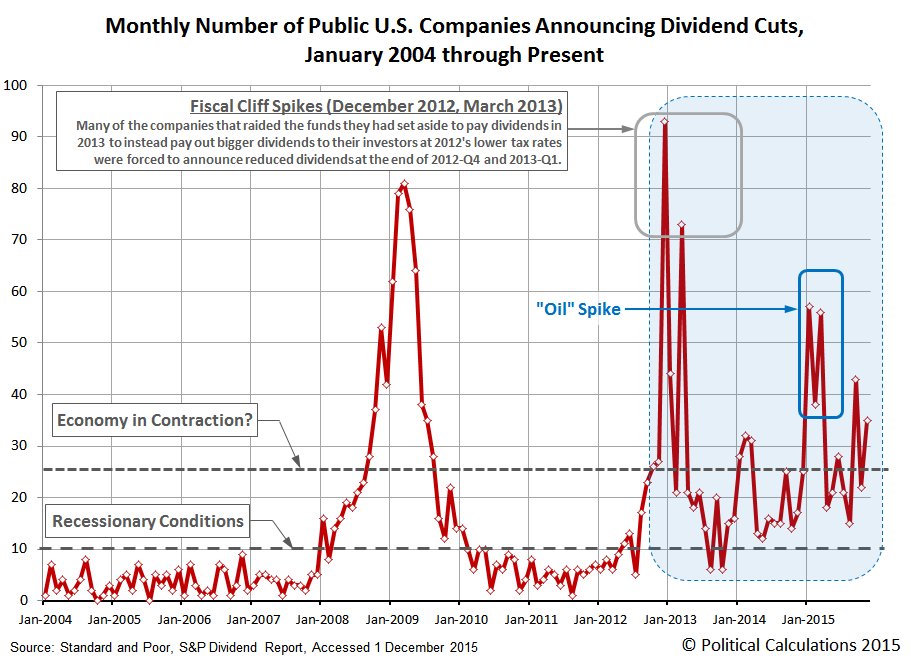 Our alternative sources for announced dividend cuts, Seeking Alpha's Market Currents (filtered for dividends) and the Wall Street Journal's Dividend Declarations database, counted fewer dividend cutting companies than S&P did in November 2015, but here's the percentage breakdown of the affected industries to give us some idea of where the distress in the U.S. economy is to be found:

The biggest change from previous months is the spreading of economic distress from being narrowly concentrated in just the oil & mining and financial sectors of the U.S. economy to manufacturing firms, such as Sturm Ruger (NYSE: RGR), Harsco, (NYSE: HSC) and Houston Wire & Cable (NASDAQ: HWCC), and global shipping firms, including Textainer Group (NYSE: TGH) and TAL International Group (NYSE: TAL).

In the case of the manufacturers, the announced cuts confirm much of the slowdown that has been indicated by the manufacturing surveys taken by various branches of the Federal Reserve and the Institute of Supply Management over much of 2015. Meanwhile, the contraction of global trade in 2015 accounts for the increased distress for U.S.-based global shipping firms.

On a final note, one thing that we would expect to see in December 2015 should the Fed finally follow through on its ongoing threats to increase short term interest rates in the U.S. would be an increase in the number of interest rate-sensitive firms announcing dividend cuts, such as mortgage Real Estate Investment Trusts (mREITs).

However, we think that thanks to the Fed's credibility-damaging interest rate hike pump fake earlier this year, that number will be reduced below what it otherwise might have been for the month, as a number of these firms acted to cut their dividends back in August and September 2015 in anticipation of the Fed's action. Having cut their dividends already, it is unlikely that they will do so again in response to the Fed actually hiking interest rates just three months later.

With that being the case, we think that December 2015's count of the number of dividend cutting companies will somewhat understate the full level of distress present in the U.S. economy.