Falling global oil prices might be about to affect a lot more than just stock prices in 2016. If we're right, they're on the verge of significantly affecting the pace of job layoffs in the eight U.S. states that have high cost oil production industries as measured by the seasonally adjusted number of claims for new unemployment insurance benefits filed each week.

The chart below shows the statistical trends for the number of new jobless claims filed in the oil-producing states of Colorado, North Dakota, Ohio, Oklahoma, Pennsylvania, Texas, West Virginia, and Wyoming that have been established since 31 May 2014, before crude oil prices began falling around the world began falling in early July 2014, correlated with the average weekly retail price of gasoline per gallon in the U.S. over that time, which we're using as a proxy for crude oil prices. 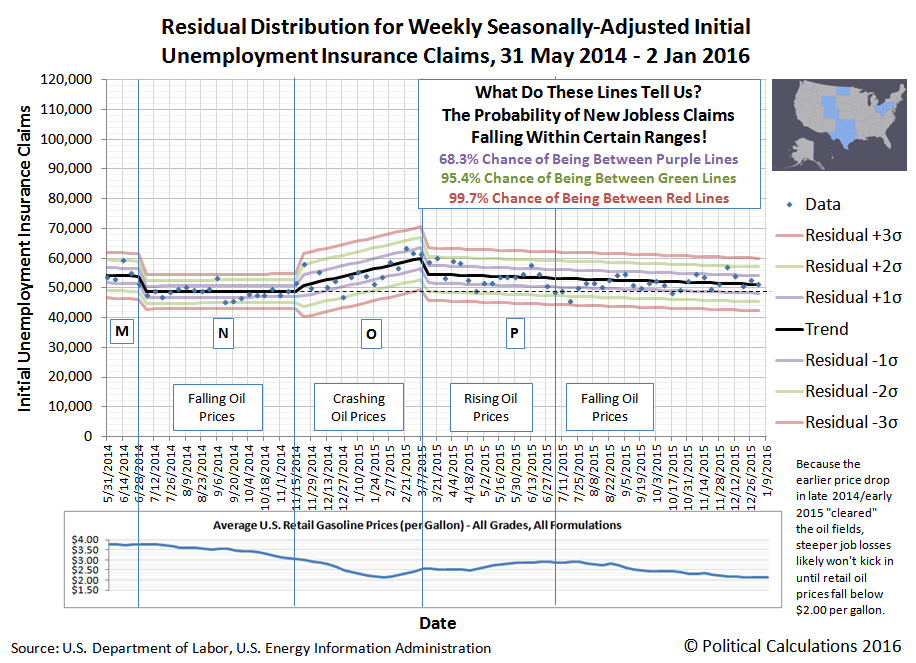 This chart indicates the four major trends that have held since 31 May 2014. Trend M represents a falling trend during which crude oil prices were elevated above $100 per barrel, which was a positive factor for the economies of these eight oil producing states. Trend N shows the level trend that took hold as oil prices began falling in July 2014 into mid-November 2014, which represents the combination of increasing layoffs in the oil sector being balanced by fewer layoffs in other industries in these states.

Trend O however represents the net increase in job layoffs that took hold as crude oil prices fell below $75 per barrel, during which job layoffs in the oil producing sector exceeded the pace of improvement in other industries, such as food and accommodation and travel-related industries, that benefit from falling oil prices. However, after oil prices bottomed and began to rise in March 2015, the current Trend P established itself, during which the pace of job layoffs has been flat to slowly declining in these eight states, as the number of new layoffs in the oil industry has been slightly outpaced by the reduction of layoffs in other industries.

That brings us up to the present, where we see that our proxy data for crude oil prices has nearly caught up to the $2.00 per gallon level where they bottomed during the previous period of rapidly falling oil prices.

Our thinking is that the previous decline of oil prices to this level "cleared" the oil fields of these states from seeing a steeper pace of job layoffs during the more recent period of falling oil prices that has taken place since July 2015. But now that oil prices are falling below the level where they previously bottomed, it is increasingly likely that these states will see Trend P come to an end, to be replaced by a new trend where the number of weekly layoffs increases significantly as the net number of oil industry layoffs once again begins to exceed reductions in other industries that benefit from falling oil prices.

That's quite a different story from what we've observed in the other 42 states that don't have high cost oil production industries, where we've only observed two major statistical trends in new jobless claims in the period since 31 May 2014: 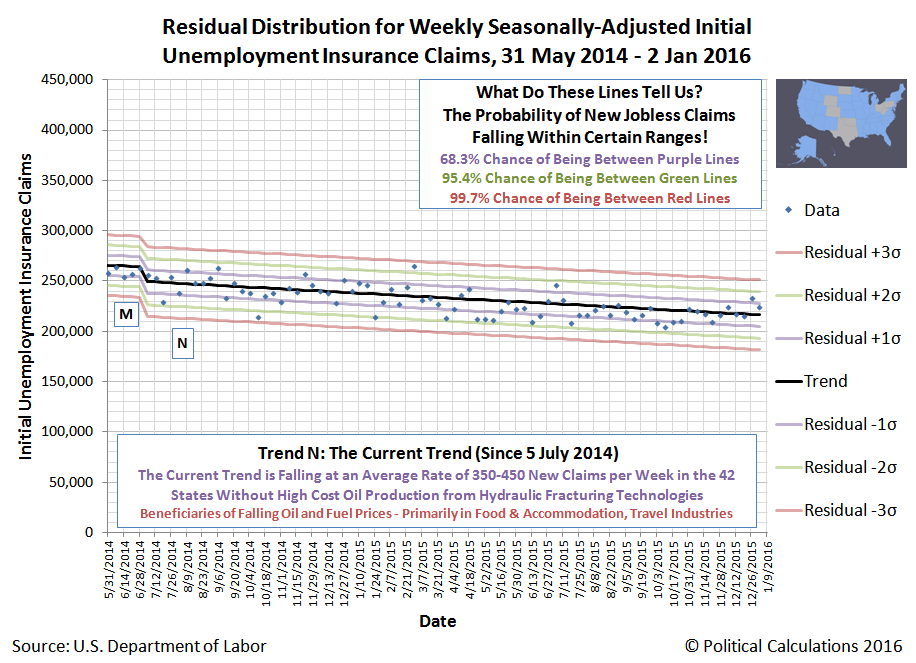 Whereas the trend in new jobless claims in the 8 high cost oil production states has been flat to slightly declining, in the rest of the U.S., we see that the number of new jobless claims has been steadily falling at an average pace of 350-450 per week ever since oil prices began falling in early July 2014.

Looking at the U.S. as a whole, we see a similar trend, although one where the average pace of declining layoffs is slightly lower than that for the 42 non-high cost oil production states by themselves, as we would expect. 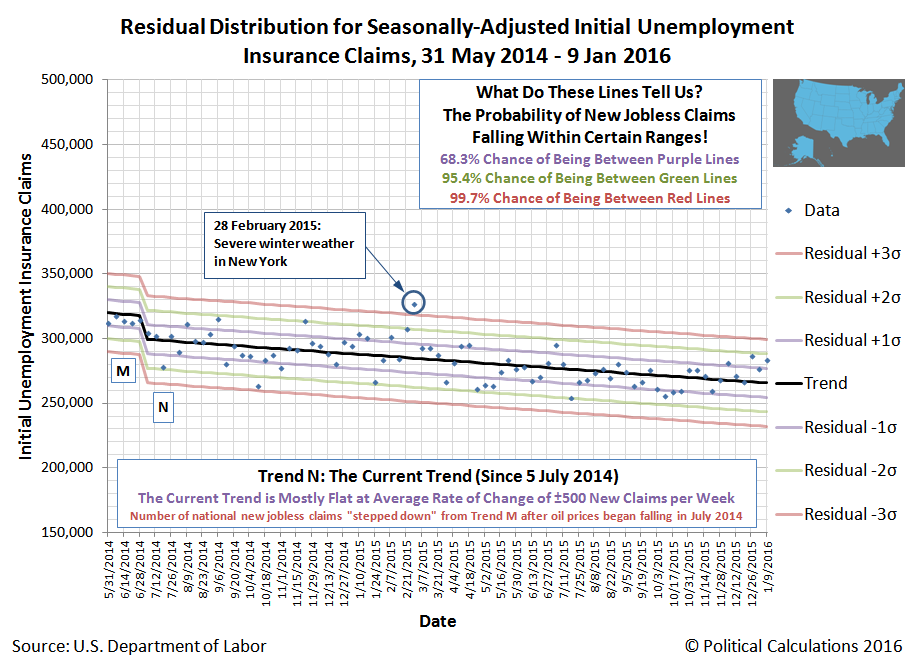 So here's what to watch for in the new jobless claim data in upcoming weeks. Since only the national data will be reported, the key figure to watch out for is any single increase in the number of seasonally-adjusted claims being filed above 300,000, or at least two consecutive increases of 280,000 or higher. What these figures would indicate is that the current Trend N shown on the national chart has very likely broken down and that a new statistical trend has begun. ONe that is less positive than what the U.S. as a whole has seen since early July 2014.