Political Calculations
Unexpectedly Intriguing!
January 12, 2016
Is the Jackpot Big Enough to Bet on the Lottery Yet? 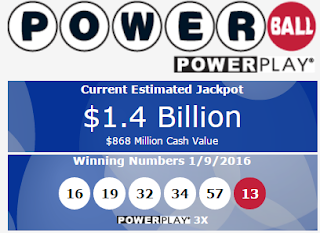 In October 2015, the Multi-State Lottery Association tweaked its Powerball lottery game to make it much harder to win. So much harder, in fact, that the grand price jackpot for the lottery has reached an all-time record, well over $1 billion.

But at $2.00 a ticket, is it worth playing the game, where just one set among some 292,201,338 possible combinations of numbers can win the jackpot? Alex Tabarrok describes how we might use math to find out, using the example of where the jackpot was at a week ago!

The odds of winning are 1 in 292.2 million. So the expected value of a ticket is $800*1/292.2=$2.73. A ticket only costs $2 so that’s a positive expected value purchase! We do have to make a few adjustments, however. The $800 million is paid out over 30 years while the $2 is paid out today. The instant payout is about $496 million so that makes the expected value 496*1/292.2=$1.70. We also have to adjust for the possibility that more than one person wins the prize. If you play variants of your birthday or “lucky” numbers that’s a strong possibility. If you let the computer choose your chances are better but with so many people playing it wouldn’t be surprising if two people had the same number–I give it at least 25%. So that knocks your winnings down to $372 million in expectation.

Finally the government will take at least 40% of your winnings, leaving you with $223 million in expectation. At a net $223 million the expected value of a $2 ticket is about 75 cents. Thus, a Powerball ticket doesn’t have positive net expected value but the net price of $1.25 is significantly less than the sticker price of $2. $1.25 is not much but to get your money’s worth buy early to extend the pleasure of anticipation.

Fortunately, we have a tool that can do all the needed math to answer these questions! But rather than figure out the price of a ticket that would be worth the value of the jackpot, we'll work out the magic number that the jackpot actually has to be to be worth the cost of a single $2.00 ticket to play!

If you're accessing this post on a site that republishes our RSS news feed, please click here to access a working version of our tool at our site.

In the tool above, we set our default example to represent the scenario that would be faced by residents of New York, NY, home to the greediest combination of federal, state and local income taxation in the United States, at least where lottery winnings are concerned.

As such, this example represents the largest jackpot that it would take to justify paying the $2.00 cost to play the Powerball lottery.

But what is it for where you live? Just enter the numbers that apply for you and find out! Plus, as a bonus, you can adjust the other data input fields to consider whether it makes more sense to play other lottery games.

Some Other Things to Consider

There are some who say that the right jackpot to reference against is not the "big" number that's tossed about in the media, but rather the amount of the payment you would get if you took the winnings in a single lump sum.

Technically, that would be correct - however that doesn't consider some other dynamics that come into play when jackpots get very large.

Namely, the bigger the grand prize, the more people who play, and the more possible combinations of numbers get consumed making it much more likely that the lottery will be won when the numbers are randomly selected in the next drawing.

That happens often enough that jackpots rarely ever reach the levels where they are really worth the cost of a ticket. And because that happens, it therefore makes more sense to play the lottery before it actually reaches that point. Keying off the "big number" just happens to be a convenient way to define where that threshold lies.

Ultimately, there is a trade off to be made for those seriously considering playing the lottery. You can either take the risk of holding out and waiting for an extraordinarily unlikely event to happen, as represented by the size of the lump sum payout ever reaching a value that would be worth the cost of a ticket before you play the lottery, or you can accept some risk, wait for the value of the jackpot to be maximized as much as you can reasonably ever hope it will, before you pay the cost of a ticket to play for a prize that you're extraordinarily unlikely ever to win.

Or you can take no risk and never win and never lose. And if that's you, surely there's some other sure thing to which you can apply your two dollars that will reward you as much or more than a lottery ticket ever could....