It was delayed until 13 January 2015, but Standard and Poor's monthly dividend report for December 2015 [Excel spreadsheet] is now out!

The bad news is that it paints a grim picture for the U.S. economy in the last month of 2015, with 40 U.S. firms announcing dividend cuts during December, indicating that a significant portion of the U.S. economy experienced some degree of outright contraction as 2015 came to an end. 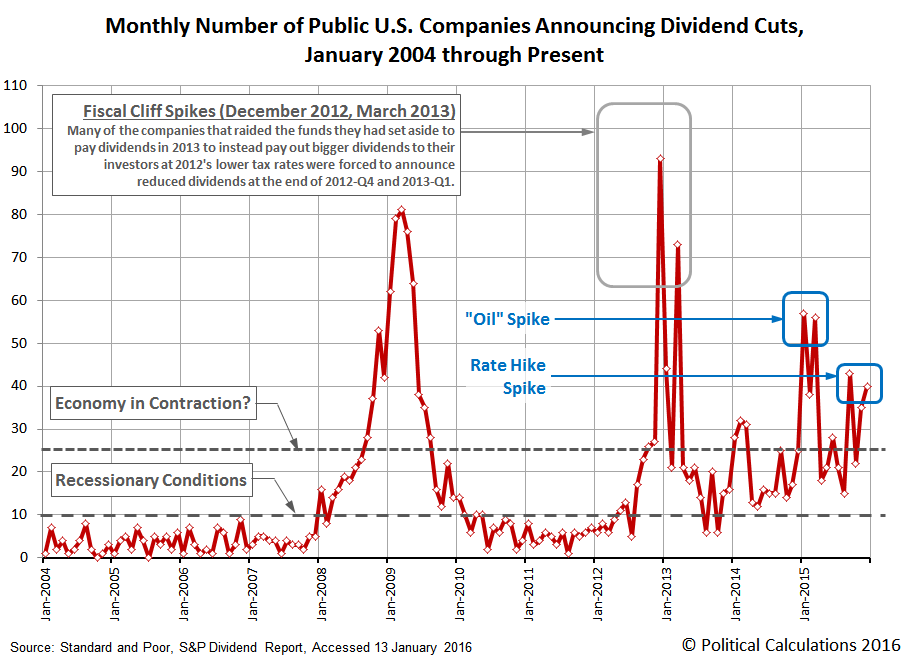 Produced by Standard and Poor's S&P 500 data wizard, Howard Silverblatt, the report provides the most complete documentation available regarding the total number of actions that U.S. firms have historically taken with respect to their dividends since January 2004. Here are the statistics of interest from the report:

At 394 dividend cuts announcements, 2015 ranks between the recession years of 2008 (at 295 dividend cuts) and 2009 (at 527 dividend cuts) as the third worst of the past twelve years for which we have such complete data.

Based on our more limited sample of dividend cuts reported in December 2015 through either Seeking Alpha's Market Currents Dividend news and the Wall Street Journal's Dividend Declarations database, the hardest hit sector of the U.S. economy continued to be the oil sector accounting for 13 of our 30 company sample for December 2015, followed by interest rate-sensitive Real Estate Investment Trusts (7), and by mining (3) and manufacturing (3) firms.

Those results are quite different from December 2014, where we had a sample of 14 firms, 9 of which were in the oil sector, with the other 5 cuts being accounted for by just a single firm in each of 5 different industrial sectors. What the data for December 2015 confirms is that the economic distress that took hold late in 2014 not only continues to negatively impact the oil producing sector of the U.S. economy, it has spread beyond it as well.

The last we checked, dividend cuts like the elevated number of 394 that were recorded in 2015 are not as fictional as some would claim.