This week, there is no better way to describe what happened to the pace of dividend cut announcements than to consider the immortal words of Ron Burgundy from the documentary Anchorman.

Now, look at the following chart to see why those words have become applicable to today's stock market. 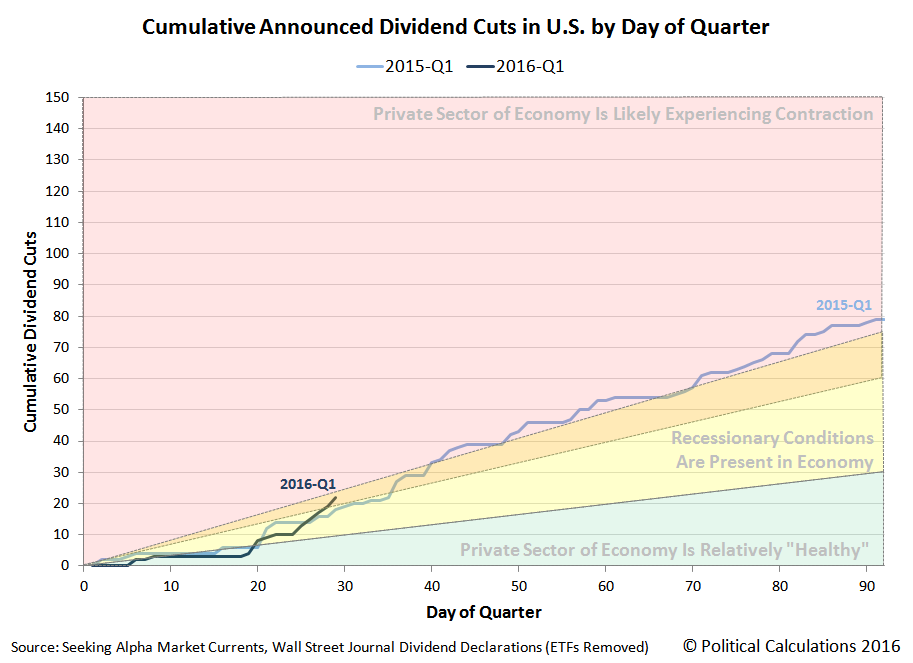 As Ron Burgundy might say: "Boy, that escalated quickly... I mean, the apparent level of distress in the U.S. economy really got out of hand fast."

The chart above, with data through the last day of trading in January 2016, is based on our compilation of data reported by Seeking Alpha's Market Currents Dividend News and the Wall Street Journal's Dividend Declarations database.

We see that the pace of dividend cuts accelerated significantly in the last week of January 2016, rising from being just above a level that would merely suggest that recessionary conditions are present in the U.S. economy to falling right in the middle of the borderline region that suggests that a significant portion of the U.S. economy is experiencing some degree of outright contraction.

Looking at the companies whose announced dividend cuts were reported by our two real-time news sources, we find that all but three of the announcements in January 2016 were made by firms in the oil producing sector of the U.S. economy. For the other three, staffing firm CDI Corporation (NYSE: CDI) places a lot of contract employees at U.S. oil producers, CSI Compressco (NASDAQ: CCLP) provides manufacturing services to the oil industry, and only New York Community Bankcorp (NYSE: NYCB), whose dividend cut following its acquistion of another bank was finally recorded after it first announced it would take this action back in November 2015, can be considered to not have been influenced by increasing distress among U.S. oil producers.

But at a combined total of 22 dividend cuts (24 if we include the duplication of earlier dividend cut announcements by Kinder Morgan (NYSE: KMI) and Teekay Corporation (NYSE: TK), our two sources of real-time dividend cuts announcements fell far short of the full total of 55 that was reported by Standard and Poor for the month of January 2016. 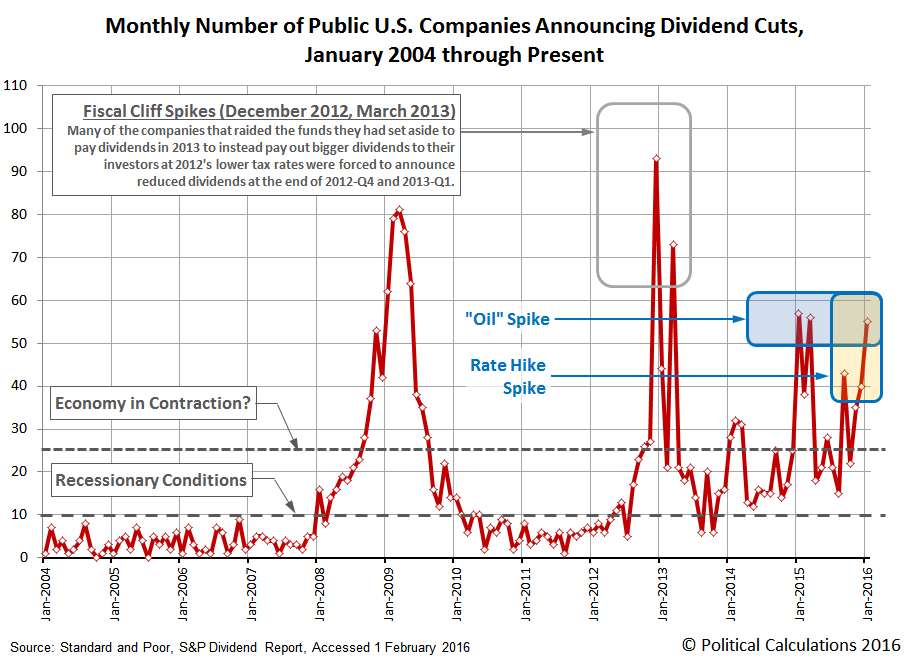 Assuming that S&P's count of dividend cut announcements is not revised, this figure indicates that a significant part of the U.S. economy is experiencing a moderate-to-severe level of contraction.

Our updated chart also provides an opportunity to highlight the key factors that are negatively impacting the U.S. economy: the ongoing distress in the U.S. oil producing industry, which is the result of the significant decline in global oil prices that has hammered the industry's revenues, and also the recent rate hike by the U.S. Federal Reserve, which has increased the costs for a number of interest-rate sensitive firms, such as mortgage-related Real Estate Investment Trusts.

The bottom line? Something is badly broken within the U.S. economy. That thing is primarily the U.S. oil production industry and also industries that are especially sensitive to interest rate hikes. According to dividends, falling oil prices and poorly considered interest rate hikes by the Federal Reserve are responsible for the increase in distress that took place in January 2016.