Political Calculations
Unexpectedly Intriguing!
March 21, 2016
A Different and Longer List for Dividend Cuts Than a Year Ago

We're delaying our weekly look at the S&P 500's performance in the previous week by a day because sometime later today, we'll get our first look at what the expectations for dividends are for the first quarter of 2017.

So as we're stalling for time, we thought it might be interesting to update our chart showing the cumulative number of U.S. firms that have announced ordinary dividend cuts during the current quarter of 2016-Q1 through Friday, 18 March 2016, which we'll compare to the year ago quarter of 2015-Q1. 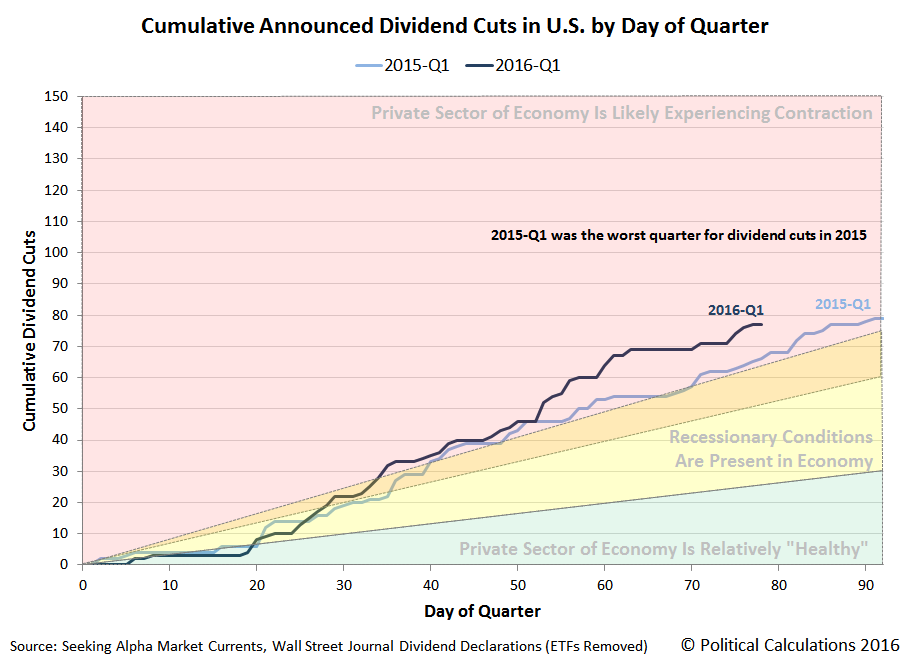 Since the last time we updated this chart at the beginning of March 2016, we see that U.S. firms in 2016-Q1 continue to be following a more distressful path than did U.S. firms in 2015-Q1, which itself was the worst quarter for dividend cuts in all of 2015.

Moreover, we see that the main difference between the quarters has set in since Day 50 (19 February 2016) of the current quarter. We thought it might be interesting to see which firms have announced dividend cuts in the past month - our results are presented in the table below.

Sharp eyed readers comparing this listing to our previous version will note that we have adjusted the size of the dividend cut shown for Gramercy Property Trust (NYSE: GPT), as we later found that the amount of the firm's previously reported dividend cut was really an artifact of its reverse merger with Chamber Street Properties (NYSE: CSG), which affected the number of outstanding shares.

Looking over the list of 33 dividend cutting firms, we find that 9 are in the oil industry (27.3%), 6 are Real Estate Investment Trusts (18.2%) and 5 are in the finance sector (15.2%), which together account for nearly 61% of all dividend cuts that we have been able to identify from our news sources in the month since 19 February 2016. Of the remainder, 3 are mining firms (9.1%), there are 2 each for technology, shipping, and manufacturing firms (18.3%) and 1 each for the hotel, chemical, utility, and restaurant industries.

By comparison, our news sources identify 22 firms that announced they would reduce their dividends between 19 February 2015 and 18 March 2015. Of these dividend cutting firms from a year ago, 10 were in the oil and gas industry (45.5%), 4 were in the finance sector (18.2) and 3 were REITs (13.6%). There were 1 each for firms representing the technology, shipping, mining, aerospace, and materials industries.

Some readers have remarked that our previous listings of firms that have announced dividend cuts include firms that pay variable distributions rather than set dividends. To be honest, that's a distinction without much of a meaningful difference where dividend cut announcements are involved. When times are good, such firms automatically distribute increasing dividend payments to their shareholders and when times are bad, they automatically reduce those payments. They are simply more responsive to the economic conditions that exist in their markets.

As such, since dividends are the primary fundamental driver of stock prices, the stock prices of these firms will tend to be more volatile than firms that more firmly fix the expectations for their future dividend payments.

Which is why U.S. stock market earnings can crash without necessarily taking stock prices down with them as would seem to be predicted by such metrics as Shiller's CAPE Ratio. China's government-directed financial institutions could have spent a heck of a lot less money to prop up that nation's stock markets by simply having Chinese firms set their dividends independently of their earnings and underwriting those payments to investors instead of the outright stock purchases they chose to make instead.