Going by the exchange rate adjusted year-over-year growth rate of the value of trade between the two nations, the relative health of the economies of both China and the U.S. would appear to have rebounded in February 2016 as compared to previous months. 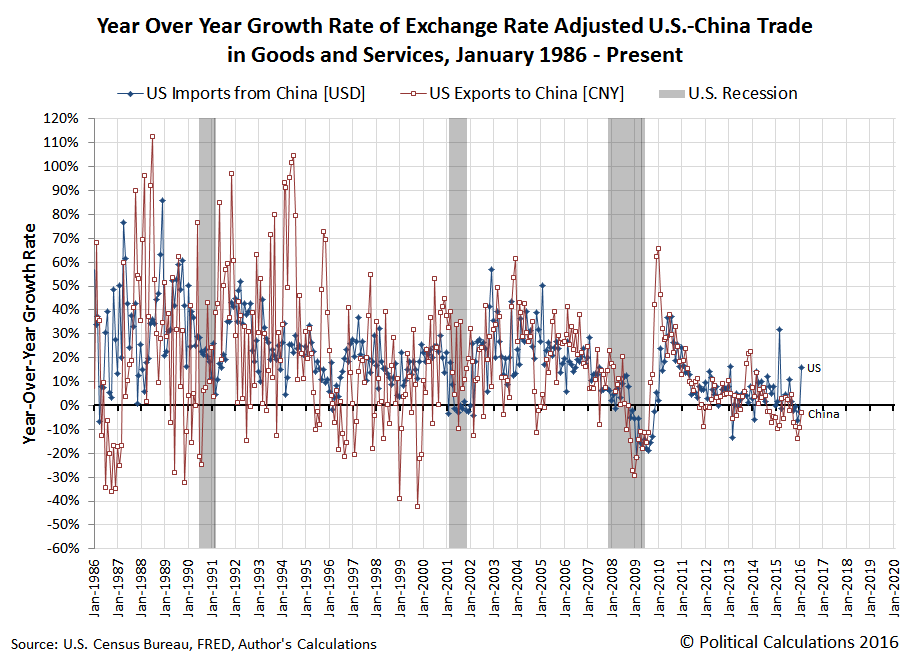 But there's more to the story. In the U.S., unionized longshoremen at the nation's west coast ports had been engaged in a disruptive work slowdown in the year ago period, which had slowed the unloading of goods being imported by the U.S. That labor action came to an end on 21 February 2015 when a five year agreement between the longshoremen and the Pacific Maritime Association, the operator of the nation's 21 west coast ports, came to an agreement.

So much of the year over year improvement in the growth rate of goods imported to the U.S. from China really reflects the end of the union's work slowdown, which was a contributing factor to the slow economic growth the U.S. experienced in the first quarter of 2015.

Meanwhile, although the year over year rate of growth of the goods that China imports from the United States was negative, it was never-the-less an improvement over previous months.

It was also quite a contradiction from the trade statistics that China had reported nearly a month earlier, where China's official government statistics had indicated that nation's imports from all nations had declined by 13.8%, while its exports to all nations has plummeted by 25.4%.

Assuming that China's official government statistics are anywhere close to correct (they're not, that's why we use the U.S.' trade data for our analysis, but they are at least believed to capture the direction of change), for the U.S.' imports from China and exports to China to have done so much better than these figures would suggest would mean that China's trading volumes with the rest of the world were absolutely abysmal.

If true, that result suggests something very unusual. Could China be favoring its trade with the United States at the expense of all its other trading partners? And if so, why would that nation's leaders choose such a course of action?