Political Calculations
Unexpectedly Intriguing!
May 3, 2016
Dividend Cuts Far From Out of the Woods

We have some good news! For the first time since October 2015, the number of U.S. firms that announced dividend cuts during a calendar month dropped below the level where we can be reasonably certain that at least part of the U.S. economy is experiencing significant contraction.

But the bad news is that at 24 firms, the still elevated number of dividend cutting firms who communicated that they are experiencing economic distress during April 2016 indicates that the U.S. economy is pretty far from being out of the woods. 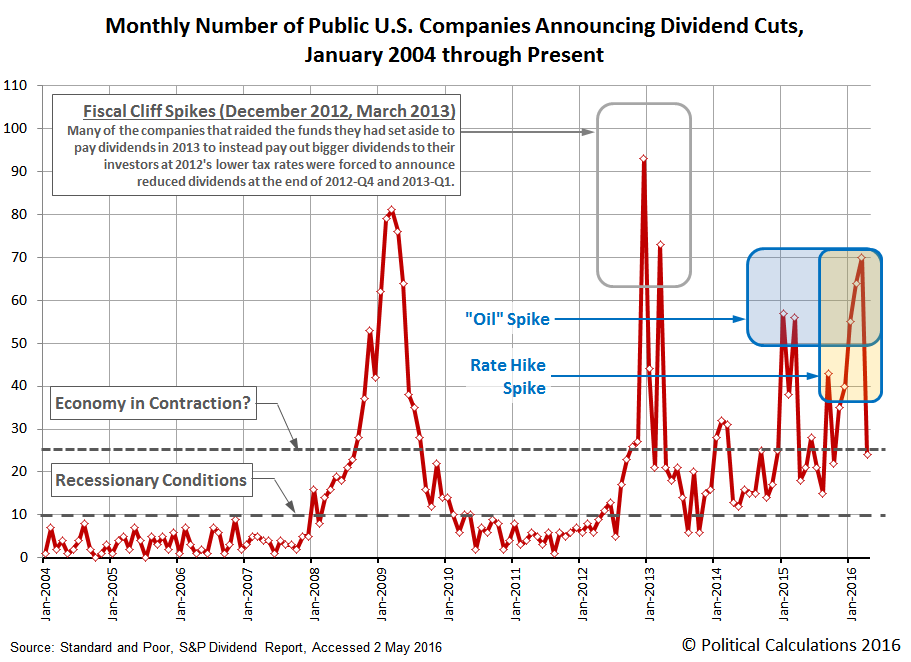 To be considered to be fully out of the woods, the number of firms announcing dividend cuts each month would need to fall below a level of 10. The U.S. stock market hasn't seen a number below that mark since October 2013.

Meanwhile, for the fourth year in a row, the number of firms announcing that they are cutting their dividends spiked during the first quarter of the calendar year. Back in 2013, that was a direct consequence of expected and actual changes in U.S. tax laws.

But in the first quarters of 2014, 2015 and now 2016, it is the result of an increasingly dour outlook for the business prospects of an increasing number of U.S. firms, and in particular, firms with relatively small market caps, who have been forced to take this action.