Political Calculations
Unexpectedly Intriguing!
May 24, 2016
Spring 2016: To Whom Does the U.S. Government Owe Money? 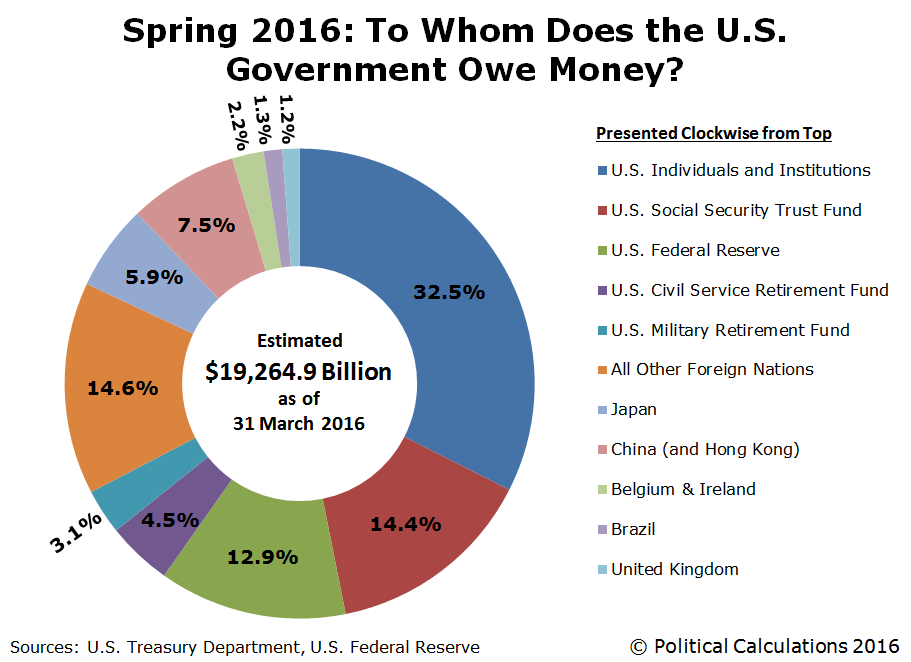 In the chart above, we've grouped Belgium and Ireland together, next to the pairing of Mainland China and Hong Kong, because major banks in these nations have been increasingly acting as intermediaries for China's total holdings of U.S. government-issued debt securities. Along with a number of banks in the United Kingdom, which have served a similar role in recent years, we believe that a good portion of China's ownership of U.S. Treasuries is being incorrectly attributed to these nations.

Meanwhile, Brazil's holdings have fallen over the past year, as falling oil prices and falling exports to China have taken a toll on the South American nation's economy. Back in 2011, we had noted the rise of Brazil's holdings of U.S. Treasuries were an indication that it was a rising world power. Those holdings peaked in 2014 and since then, Brazil's status has faded along with its economic and now political challenges.

But perhaps the biggest news in the U.S. Treasury's updated data is that discontinued its previous grouping of "oil exporters" as a single category, instead presenting the U.S. Treasury holdings of Saudi Arabia, United Arab Emirates, Kuwait, and others individually for the first time since it began reporting the data in 1974. Of these nations, Saudi Arabia had the largest holdings at $117 billion, accounting for 0.6% of the total public debt outstanding for the U.S. government.

Like China however, many of Saudi Arabia's actual holdings of U.S. government-issued debt securities are likely being attributed to other nations. Since Saudi Arabia recently threatened to sell off $750 billion worth of U.S. Treasuries and other assets, which suggests the nation maintains most of these assets in non-direct accounts based in other nations.