Several weeks ago, Political Calculations launched a new series, "Examples of Junk Science", where we are specifically focusing on where flawed analysis and the misuse of data leads to the spread of false or misleading information in the fields of investing, finance and economics.

More than that, we're also seeking to present explanations for why the examples of flawed analysis and misuse of data that we present lead to results that are not valid, which we hope will be beneficial for analysts who seek to make positive contributions in these fields, where the ultimate goal is be to improve the general quality of analysis that is produced altogether. We hope to do that in part by highlighting real examples so you can more quickly recognize them as the pseudoscientific junk they are so you can directly challenge the people who propagate them.

Today's example of junk science is representative of what may quite possibly be the most common way that analysis is twisted to present a misleading picture of the economy. Coincidentally, it is also perhaps the simplest: stating changes in values as a percentage of a percentage.

This is a technique that can greatly exaggerate the significance of a claim, which often will fall apart when put into a more appropriate and relevant context. As such, this kind of data mishandling falls under the precision category of the checklist for how to detect junk science.

Today's example isn't so much about decimal places as it is representative of the kind of deception that results when precisely calculated values are placed into an inappropriate context. Let's go over the details....

A chart similar to the one below was included in a blog post under the heading “Bank C&I Loan Charge-Offs Soaring Again”. This chart caught my attention because it seems to indicate that bank C&I (Commercial and Industrial) loan charge-offs are happening at one of the fastest rates of the past 30 years — the sort of rate that would be consistent with the US economy being in recession. 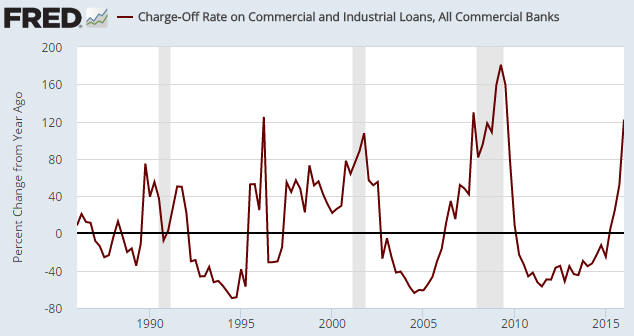 The problem is that the above chart shows the percentage change of a percentage, which opens up the possibility that what is in reality a small increase is being made to look like a large increase. For example, an increase from 1% to 2% over the course of a year in the proportion of loans charged-off would be a 100% increase if expressed as a year-over-year percentage change in the percentage of charge-offs, whereas all you’ve actually got is a 1% increase in the total proportion of loans that have been charged-off. 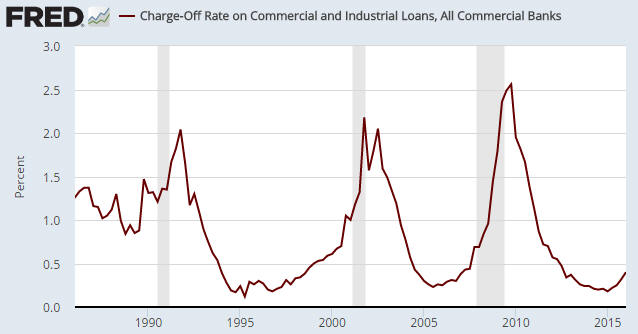 The same data, opposite messages.

No matter how you slice it, the presentation of a percentage change of a percentage is always highly misleading, even if mathematically correct. At the very least, it is more than one step removed from the actual numbers used to calculate the original percentage, which is the appropriate context in which the percentage can be understood.

PHOENIX — A state judge ordered late Friday that the description of a proposed tax increase for transportation be rewritten to exclude a calculation of how much the levy will increase.

The description is to be put into pamphlets mailed to the home of every registered voter.

Maricopa County Superior Court Judge Edward Burke said it may be "mathematically correct" to say that Proposition 203, which would boost state sales taxes from 5.6 cents on every dollar spent to 6.6 cents, equals a 17.8 percent increase in what people will pay in sales taxes.

But the judge said such calculations "are likely to mislead many voters."

He accepted the arguments by Paul Eckstein, the attorney for tax backers, that the figure was deliberately inserted by Republican lawmakers to convince voters to reject the levy.

Mike Braun, who represents the Legislative Council, told Burke the law requires the panel to not only explain each ballot measure but also how approval would affect existing law.

He said it would be "helpful" to tell voters that whatever they are paying in state sales taxes would increase by 17.8 percent if Proposition 203 is adopted.

Eckstein, however, told the judge the accuracy of the calculation is beside the point.

"An analysis can be 100 percent accurate, and it can be unfair and misleading," he said.

"Many voters are likely to confuse relative and absolute percent increases," the judge wrote.

In the case of today's example of junk science, it's the difference between suggesting that the risk of recession is imminent or of there being a comparatively low risk of recession in the near term. Given how different those outcomes are, expressing calculated values in the correct context is essential to avoiding the consequences that would come from taking the wrong actions in response to misleading information.

Saville, Steve. You can make statistics say whatever you want. The Speculative Investor. 19 July 2016. Republished with permission.