For a market that hasn't experienced much in the way of volatility lately, Friday, 26 August 2016 was a welcome departure for observers. Unfortunately, if you only tracked the closing price of the S&P 500 from day to day, you wouldn't have noticed!

To see what we mean, let's flip our usual presentation of charts around and show what our modified model of the alternative future for S&P 500 stock prices projected through Week 4 of August 2016: 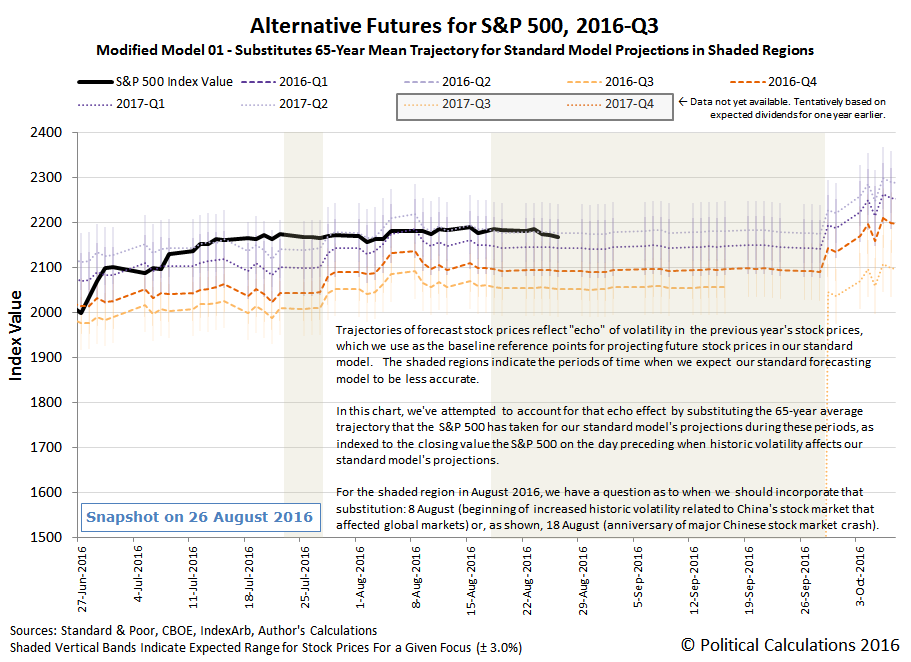 From the beginning of the week to the end of the week, it would appear that investors kept their forward-looking focus on 2017-Q2 in setting the level of the S&P 500 throughout the week, well within the typical range of volatility we would expect. More to the point however, there was very little movement in the level of the S&P 500 from one day's closing value to the next all throughout the week.

So far, our modified model for projecting future stock prices is providing a more accurate forecast than our standard model, whose projections have been skewed by the echoes of past volatility from last year's market reaction to the meltdown of China's stock markets. 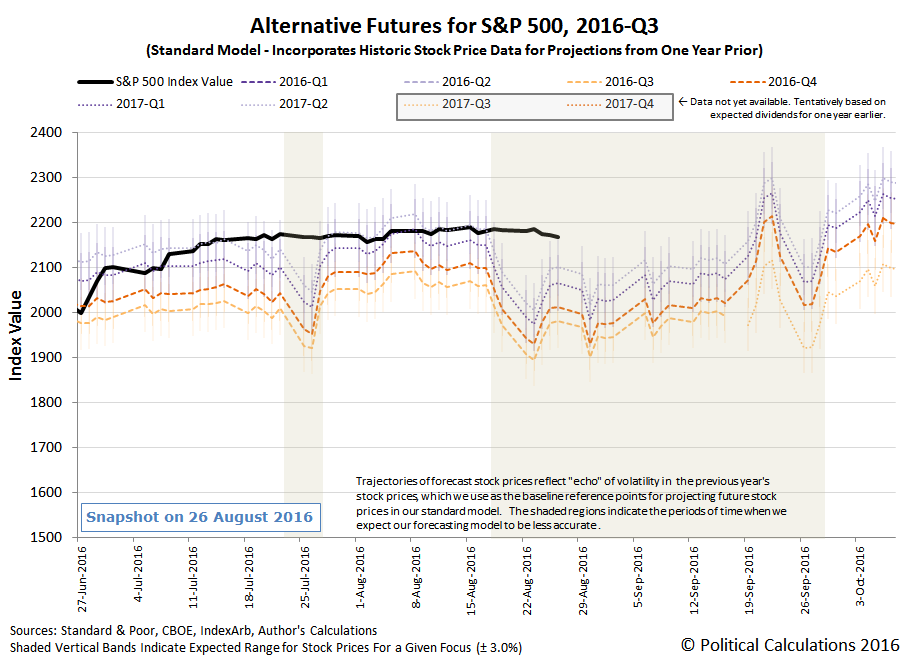 All that said, let's focus on the headlines that influenced the week's market action.

Here's a screenshot of Friday's Fed official-inspired volatility for the S&P 500: You can see the market's reaction to Janet Yellen's comments from Jackson Hole, Wyoming at and after 10:00 AM, while the reaction to Stanley Fischer's comments came as he spoke later that morning, at and after 11:30 AM. As a general rule of thumb, it typically takes some 2-4 minutes for the market's reaction to news it wasn't expecting to become noticeable as a change in trajectory for stock prices. For further reading, ZeroHedge has an interesting take on the markets' real time reactions to the major Fed officials' Jackson Hole speeches, which touches on why they responded bullishly to Yellen's seemingly otherwise mildly hawkish comments (a hint of more quantitative easing monetary policy!), as well as an overall post-mortem.

Meanwhile, Barry Ritholtz has succinctly summarized the positives and negatives for the week's market and economic news, which we recommend surveying to get a broader sense of the general investing climate that existed during the week.